Two Tennessee governors have called Carroll County home. Both men, Alvin Hawkins and Gordon Browning were lawyers and politicians whose careers took hold in Huntingdon. This week I would like to share the story of Alvin Hawkins, most of which came from the History of Carroll County publication and William Robertson Garrett and Albert Virgil Goodpasture’s History of Tennessee. 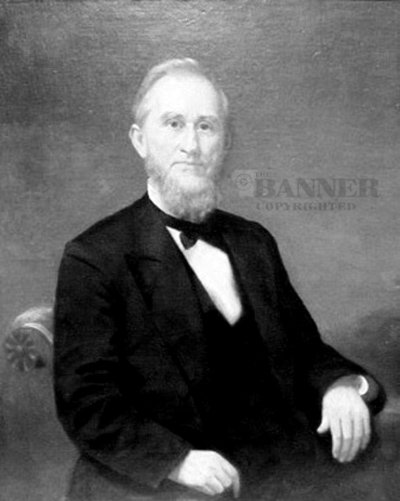 The official state portrait of Alvin Hawkins by Washington Cooper. 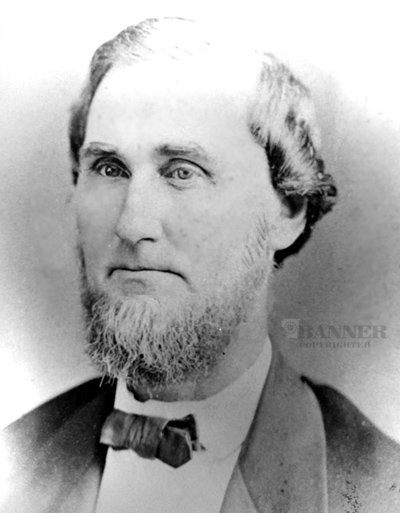 Portrait of Alvin Hawkins that once hung in Gordon Browning’s office. 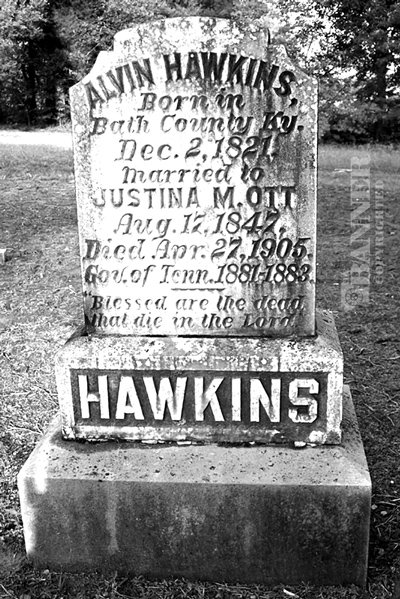 Former Governor Alvin Hawkins’ headstone has the engraving “Blessed are the dead that die in the Lord”.
Previous Next
Posted Tuesday, November 23, 2021 8:00 am
By Jason Martin
jmartin@mckenziebanner.com

Two Tennessee governors have called Carroll County home. Both men, Alvin Hawkins and Gordon Browning were lawyers and politicians whose careers took hold in Huntingdon. This week I would like to share the story of Alvin Hawkins, most of which came from the History of Carroll County publication and William Robertson Garrett and Albert Virgil Goodpasture’s History of Tennessee.

Alvin Hawkins was Carroll County’s first Governor of Tennessee. Mr. Hawkins was born in Bath County, Kentucky on December 2, 1821. His father, John N. Hawkins (1796–1852) was the descendant of an ancient English family, and quite a number of his early ancestors were prominent in English history. His mother Mary Graham “Polly” Ralston (1804–1887) was from a prominent family in Indiana.

When Hawkins was five years old he moved with his family from Kentucky to Maury County, Tennessee. They remained there for two years before moving to Carroll County in 1828. Hawkins’s youth was spent in helping his father in the gun shop and attending the country schools, although his mother was his principle teacher.

As he grew older, he engaged in farm labor and at the age of 18, he became a student at McLemoresville Academy. When he was 20 years he entered the Law Office of Benjamin Totten and studied under his direction. One year later, he was admitted to the bar and became a co-partner with his cousin Isaac R. Hawkins.

In 1845, Hawkins ran for a seat in the Tennessee House of Representatives as a Whig candidate but was defeated. In 1853, he ran again successfully winning the seat. He did not seek re-election. Toward the beginning of the 1860 election, Hawkins actively campaigned against secession and supported John Bell for president. With the election of Abraham Lincoln, the start of the Civil War and Tennessee’s secession, he remained pro-Union throughout the war.

In December 1862, after the Union Army had regained control of much of West Tennessee, the state’s military governor, Andrew Johnson, called for congressional elections to be held in its 9th and 10th congressional districts. Hawkins was elected to the 9th district seat, but the House of Representatives deemed his vote total (1,900) to be too low in proportion to his district’s population (18,000) and refused to seat him.

He resigned in 1868 to serve as U.S. Consul to Havana, Cuba. Later that year, the state legislature called for elections to choose new justices to the state court because of Brownlow’s appointees (legislators along with state Speaker of the House William Heiskell, turned against Brownlow, a Radical Republican, alleging his actions were too despotic and aligned themselves with Johnson, a Democrat).

Hawkins was among the Republican nominees, and since most southern Democrats were not allowed to vote due to their ties to the Confederacy, he was elected. When his term ended in 1870 with the new state constitution, he returned to his law practice in Huntingdon.

Tennessee like most former Confederate states struggled with the repayment of debt. Following a severe economic downturn in 1873, Tennessee scrambled to find revenue leading to it defaulting on bond payments in 1875. This led to a fraction in the Democratic Party, one faction sought to protect the state’s credit at all costs and pay off the bonds in full, and the other suggested partial payment of the bond debt.

By 1880, the Democratic Party was so divided on the issue the two factions, “low tax” and “high tax” each nominated a Democratic candidate for governor. John Wright for the “high tax” and the “low tax” selected S.F. Wilson. This division led the way for the Republican Party to have a chance at the governorship. The Republicans nominated Hawkins; he favored full repayment of the state debt. In the general election, Hawkins won with 103,964 votes to 78,783 for Wright, 57,080 for Wilson, and 3,459 for Edwards (Greenback Party).

In May 1881, the state legislature, Democrats controlled the Senate and Republicans controlled the House by one seat, passed a bill calling for all state bonds held by commercial interests to be replaced by new bonds of equal dollar value, but with a 3% interest rate, and called for the state property tax to be quadrupled.

The bill passed the House and Senate and was signed into law by Hawkins. The “low tax” Democrats challenged the law in court, however, and the act was declared unconstitutional by the Tennessee Supreme Court in February 1882. In May 1882, the legislature passed a plan calling for payment of commercial bonds at 60%, but this was never enacted.

During the gubernatorial campaign of 1882, state Democrats remained divided, but the “low tax” Democrats, with the help of former governor Isham G. Harris and the Bourbon faction (conservative Democrats), gained the upper hand. General William Brimage Bate, who favored full repayment on bonds for schools and charities, and partial repayment on commercial bonds, was nominated as the candidate.

Although Hawkins failed to win reelection, he was praised by members of both parties for running an honest government. Under his administration, he helped erase the stigma attached to the Republican Party as a result of the Brownlow administration’s radical post-war policies. Hawkins also enacted several judicial and educational reforms.

He appointed W.S. Doak as state superintendent of schools, and the state’s first professional institute was established during his tenure as governor.

Following his term as governor, Hawkins returned to his law practice in Huntingdon. He remained active in the Methodist Church, Hawkins died on April 27, 1905, and was buried in the Hawkins Cemetery on Buena Vista Road in Huntingdon.