Brenna Smith is Trooper of Year

BELL BUCKLE, Tenn. (December 1) — Trooper Brenna Smith was named Trooper of the Year for District 3 of the Tennessee Highway Patrol. The McKenzie High School graduate was honored during a ceremony in Bell Buckle Tennessee on December 1. Brenna was also honored in a separate ceremony in Nashville on December 8 by Mothers Against Drunk Drivers. Brenna was credited for removing 26 impaired drivers from the roadways in the year 2020.

Brenna Smith is Trooper of Year 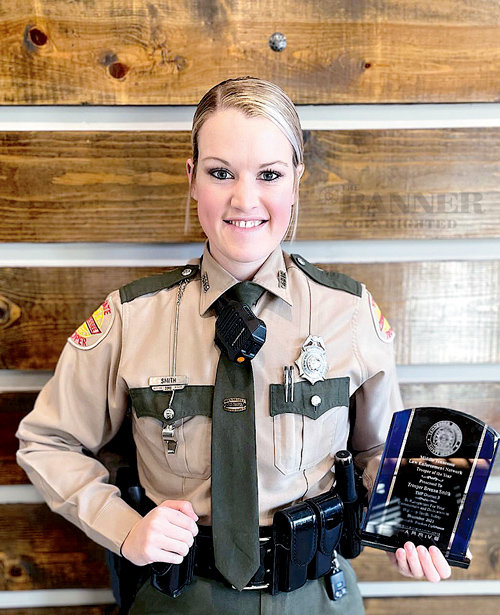 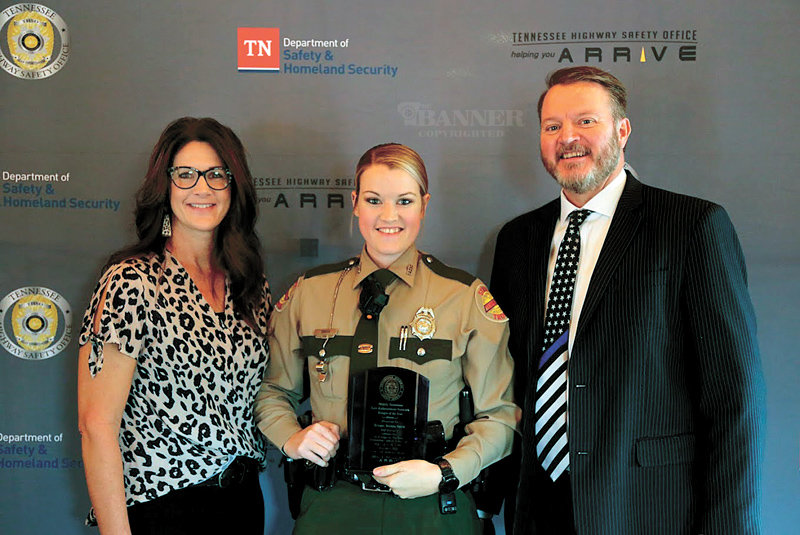 BELL BUCKLE, Tenn. (December 1) — Trooper Brenna Smith was named Trooper of the Year for District 3 of the Tennessee Highway Patrol. The McKenzie High School graduate was honored during a ceremony in Bell Buckle Tennessee on December 1. Brenna was also honored in a separate ceremony in Nashville on December 8 by Mothers Against Drunk Drivers. Brenna was credited for removing 26 impaired drivers from the roadways in the year 2020.

In the Trooper of the Year ceremony, Smith was touted as a dedicated professional law enforcement officer with several years of experience in public safety and law enforcement. Trooper Smith is one of the leaders in Enforcement Activity at the Rutherford Post, District 3, located in Middle Tennessee. The 2021 data shows Trooper Smith issued 129 Distracted Driving enforcement citations. Trooper Smith consistently goes the extra mile and produces this type of work year in and year out. But these numbers alone don’t tell the whole story of why we consider Trooper Smith as one of the “Best” for 2021.

Trooper Smith excels in every aspect of her duties and responsibilities. Trooper Smith’s willingness to do whatever she is called upon to do, and then her desire to do it well is constantly being noted by her supervisors and noticed by her fellow Troopers ‘leading by example.’ Trooper Smith has a well-earned reputation for doing things the right way. The Tennessee Highway Patrol is fortunate to have troopers like Trooper Smith in the ranks.

Trooper Smith is highly regarded and well respected by her peers at the Rutherford Post and throughout the Nashville District. Her actions, activity, demeanor, work ethic, and dedication have brought great credit to herself, her Troop, her District, and the Tennessee Highway Patrol in 2021 and we are proud to submit her name for Troop F for 2021.

This award is given to a law enforcement officer who made a substantial contribution towards traffic safety. The award is not based solely on enforcement numbers, but on purpose-driven enforcement that answers an identified community issue through a mixture of enforcement, commitment, and educational efforts. The men and women nominees for this award have shown a true passion for traffic safety by furthering their education in specific traffic safety areas such as impaired driving enforcement focus by attending advanced training in ARIDE, DRE, SFST instructor, DRE instructor, and Instructor Development. Some have attended Basic and Advanced Crash, and crash reconstruction, along with many other specialized schools and training. All while building relationships within their respective agencies, becoming known among their peers as subject matter experts. Setting and maintaining a higher standard, more than just that of “doing their job”. They work well with other agencies and within their communities to support and promote a culture of trust and respect. This has led to cooperation and trust from their peers and the communities in which they serve. These individuals have a passion and belief that deterring poor driving habits before a crash occurs can and will make a difference in many people’s lives. Oftentimes we look at numbers in all these categories, this dedication and commitment to traffic safety will never have a number attached because we may never know the number of lives saved or positively effected from their actions.

Brenna Smith of McKenzie was honored to graduate in December 2018 with the 12-18 Cadet class of the Tennessee Highway Patrol and earn her assignment as a State Trooper in Rutherford County.

Her badge was pinned on her uniform by then-Colonel Dereck Stewart, (retired) a McKenzie native, and the highest-ranking officer with the THP.

Brenna Smith began her service in the field of law enforcement while still in high school. She served as the Drug Abuse Resistance Education (DARE) America Youth Advisory Board Member for the State of Tennessee her sophomore through senior years. During her tenure, Brenna had the privilege of attending training at the Drug Enforcement Agency (DEA) in Quantico, Virginia, annual Tennessee State DARE Training Conferences, as well as International DARE Training Conferences in Atlanta, Georgia, Cincinnati, Ohio, Grapevine, Texas, and New Orleans, Louisiana. She served as the webmaster for the Tennessee DARE Officers Association website and was a writer for Teens Ask Teens, a blog sponsored by DEA in conjunction with DARE America. She was the keynote speaker each year at DARE graduations across the state. During her senior year, Brenna attended the National Narcotic Detector Dog Training Conference held in Paris Landing, Tenn. She participated in Scholastic Shooting Sports, where she was the 2015 Female Rim Fire State Champion. Brenna graduated with honors from McKenzie High School in 2015.

Brenna attended Middle Tennessee State University (MTSU) in Murfreesboro. During her first semester, she participated in and graduated from the Murfreesboro Police Department’s Citizens Police Academy. During her senior year at MTSU, Brenna completed internships at both the Murfreesboro Police Department and the Tennessee Bureau of Investigation (TBI) in Nashville. She was hired by the TBI where she worked as an administrative assistant in the Sex Offender Registry Division. Brenna graduated with honors from MTSU in May, 2018. She holds a bachelor’s degree in Criminal Justice Administration and a minor in Leadership Studies.

With graduation behind her, Brenna’s next goal was the Tennessee Highway Patrol Trooper Academy. She applied on her 21st birthday and was accepted after a lengthy application process. After a 20-week rigorous and intensive training program, Brenna graduated from the THP Trooper Academy on December 14, 2018.

She is the daughter of Larry and Kim Smith of McKenzie.