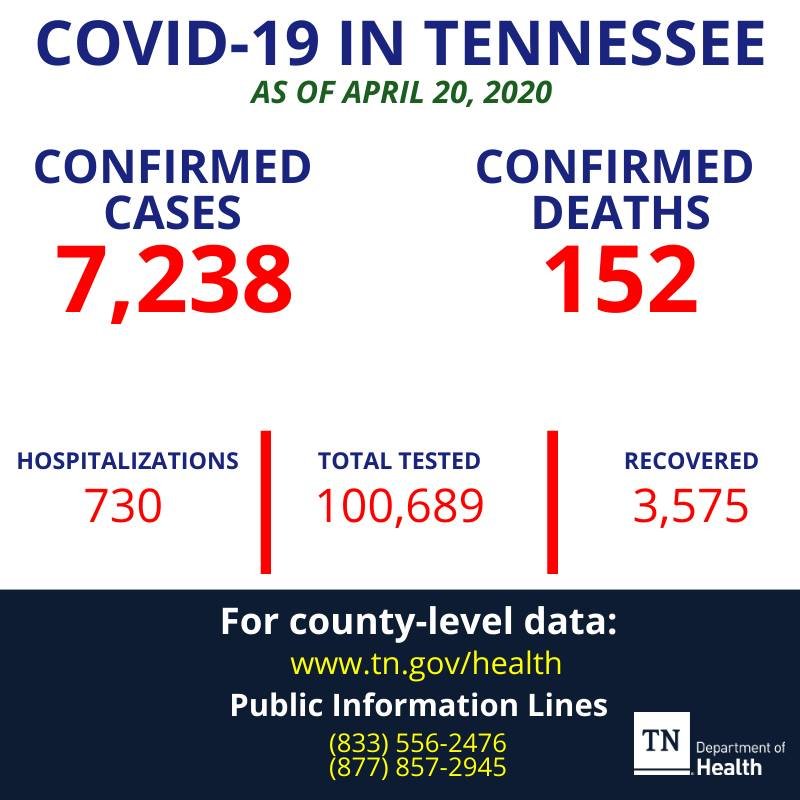 NASHVILLE (April 20, 2020) — Tennessee Department of Health reported the first death in Carroll County related to COVID-19.
The identity and the city of residence of the person were not released.
All area public schools are closed for the remainder of the 2019-2020 academic year.
In Tennessee, there are 152 deaths (2 percent), 7,238 confirmed cases, 3,573 who have recovered, and 100,638 who have been tested.
Carroll has 1 death, 11 recovered, 15 positive cases, and 285 were tested. Henry County has no deaths, 5 recovered, 9 positive, and 255 tested. Weakley has no deaths, 2 recovered, 8 positive diagnosis, and 213 tested.
Other area counties and the number of positive cases include: Benton 4; Chester 8; Crockett 6; Decatur 4; Dyer 28; Hardeman 7; Henderson 7; Humphreys 6; Madison 87 (1 death); Tipton 83; Obion 9 (one death); Davidson 1,675 with 19 deaths; Shelby 1,839 with 35 deaths.
Carroll County Mayor Joseph Butler confirmed one courthouse employee tested positive for the virus. All courthouse employees are now working from home.
“We will continue to answer calls to the court offices, and continue to take care of work that can be done remotely. This will allow us to make sure the virus doesn’t spread,” said Butler.
“In respect to HIPAA regulations, we need to work to keep patient information confidential, which is why I am not sharing the patient’s name. The patient has made sure to contact those that potentially need to be tested, and the Health Department is working closely with her and others that need to take specific actions.”
Over the weekend, more than 11,000 Tennesseans received free COVID-19 tests through the weekend efforts of Tennessee Unified-Command Group to offer tests regardless of traditional symptoms. The Unified-Command Group is a joint partnership between the Tennessee Department of Health, the Tennessee Department of Military and the Tennessee Emergency Management Agency (TEMA).
“Tennesseans across the state heeded the call of ‘when in doubt, get a test’ and we believe these efforts will be an important part of our overall strategy to reboot Tennessee’s economy,” said Gov. Lee. “While demand exceeded original projections, our Unified-Command group adapted quickly this weekend so that individuals who needed tests could receive them.”


Saturday turnout was the largest with more than 6,500 samples taken from 22 sites across all three grand divisions of the state. Tennessee Department of Health personnel and Soldiers and Airmen of the Tennessee National Guard operated 19 sites, four more than originally planned, to meet the testing demand.
In West Tennessee, the Weakley County Health Department held a mobile clinic and tests 109 persons in the three hours of operation on Saturday morning. Madison County tested 1,394 over two days. Other mobile sites were in Tipton and Hardin in rural West Tennessee.
Sunday testing turnout exceeded expectations with more than 4,600 tests collected across 11 sites. On both days, many Tennesseans drove to sites outside their county of residence to obtain a test from a neighboring county that operated a weekend site.
“Since Gov. Lee’s expanded testing initiative announcement last week, we continue to see an increase in the number of citizens who want to be tested whether it’s on a weekday or weekend and regardless of symptoms,” said Tennessee Department of Health Commissioner Dr. Lisa Piercey.
Governor Bill Lee announced the order for Tennesseans to remain at home will expire April 30, with the vast majority of businesses in 89 counties allowed to re-open on May 1.
“Our Economic Recovery Group is working with industry leaders around the clock so that some businesses can open as soon as Monday, April 27,” said Gov. Lee. “These businesses will open according to specific guidance that we will provide in accordance with state and national experts in both medicine and business.”
The Lee Administration will work with Shelby, Madison, Davidson, Hamilton, Knox and Sullivan counties and their health departments as they plan their own re-open strategies.
“While I am not extending the safer at home order past the end of April, we are working directly with our major metropolitan areas to ensure they are in a position to reopen as soon and safely as possible,” said Lee. “Social distancing works, and as we open up our economy it will be more important than ever that we keep social distancing as lives and livelihoods depend on it.”
The Economic Recovery Group (ERG), composed of 30 leaders from the public and private sector is crafting guidance to assist businesses in a safe reopening. The industry representatives participating in the ERG collectively represent over 140,000 Tennessee businesses that employ over 2.5M Tennesseans.
Coronavirus disease 2019 (COVID-19) is a respiratory illness that can spread from person to person. The virus that causes COVID-19 is a novel coronavirus that was first identified during an investigation into an outbreak in Wuhan, China. Additional cases have been identified in a growing number of other international locations, including the United States.
Patients with COVID-19 have had mild to severe respiratory illness with symptoms of: fever, cough, and shortness of breath. It is ten times more deadly than influenza.
Governor Bill Lee announced last week the “Safer at Home” mandate imposed April 2 is extended to April 30. The Governor said that until a treatment is available, possibly a year or more in the future, social or physical distancing will be part of Tennesseans daily lives. In the coming weeks, Governor Lee said the newly assembled economic recovery group will develop a plan for businesses to move forward in a world where the virus is present.