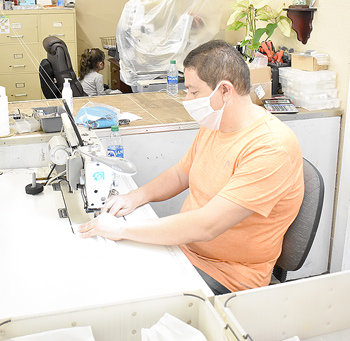 Dilla’s Sewing owner Roberto Padilla sews a mask, one of the 3,000-4,000 the shop produces each week.
Photo by Brad Sam/The Banner

The Dilla’s Sewing staff hard at work on masks and gowns.
Photo by Brad Sam/The Banner 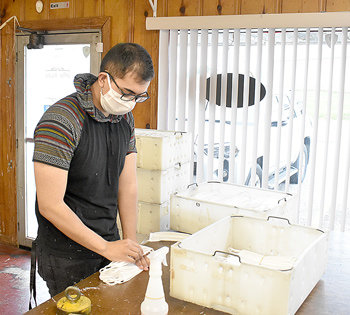 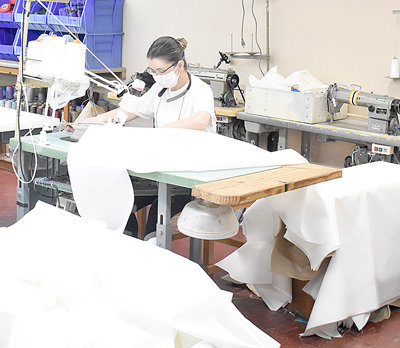 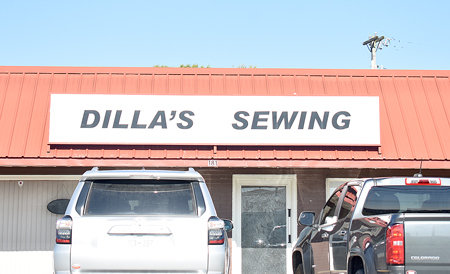 By Brad Sam
brad@mckenziebanner.com
© 2020 Tri-County Pub., Inc.
McKENZIE (April 23) — After shutting down for several weeks in the early days of social distancing, one local small business is now open and running at full steam to provide vital equipment to medical workers.
Dilla’s Sewing is producing protective masks and gowns as fast as the small staff can churn them out.
Owner Roberto Padilla told The Banner that as the COVID-19 pandemic and subsequent response set in, orders quickly dried up for the products Dilla’s usually produces, such as dance uniforms and seat covers, and he was forced to shut the doors.
He would have liked to have been contributing from the beginning, but he said that acquiring bulk quantities of the necessary materials proved to be impossible.


Then he received a call from a colleague in Georgia asking if his shop could make masks if he was provided with the fabric. He eagerly agreed and work began the first week of April.
Padilla got another call a couple of weeks ago, this time from a long-time customer in Texas wanting to provide Dilla’s with materials to produce gowns.
Dilla’s staff includes eight employees, including Roberto and his wife Hilda. The two oldest Padilla children, Jackelyne, 14, and Stephanie, 10, insisted on helping with the cause as well. The crew is working seven days a week and sewing approximately 3,000-4,000 masks and 500 gowns each week.
Padilla said that the fabric he received for the masks is unfamiliar to him, but describes it as cloth with a plastic quality. It’s breathable, but water-repellant. Most importantly, it’s approved for use by the hospitals for which the masks are destined.
He has yet to receive any similar requests from this area, but notes Mayor Jill Holland called recently and asked for permission to provide his information to someone who may need Dilla’s services.
“Anything we can do to help at this time,” he said. “This gives my employees something to do while at the same time helping hospitals.”
Padilla said that he could use two or three more employees, and that anyone interested can call him at 731-415-4097.