The Fillies played host to Martin Westview on Tuesday, April 26, and scrapped hard upsetting the Lady Chargers 5-1 to improve their chances of hosting the district tournament. 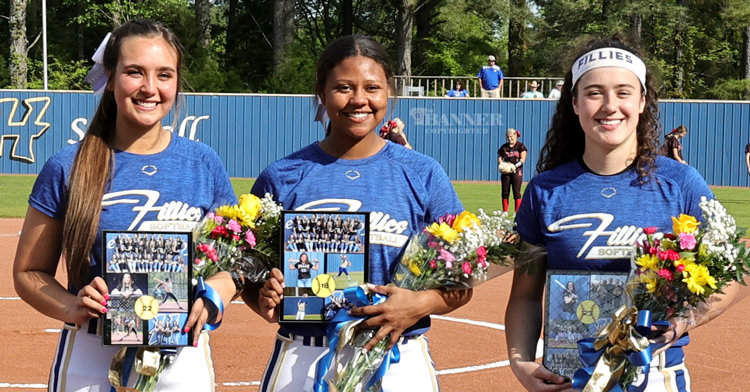 Martin Westview
The Fillies played host to Martin Westview on Tuesday, April 26, and scrapped hard upsetting the Lady Chargers 5-1 to improve their chances of hosting the district tournament.


Thursday, April 28 was Senior Day for the Fillies. They graduate three this year including Rylee Holladay, Kayla Pulling, and Kenadie Gibson. The seniors were introduced and escorted by their parents.

Kenadie Gibson was escorted by her parents Alicia Harris and Brett Gibson. Kenadie has been a member of the softball team for four years. She plans to attend MTSU and major in exercise physiology. Her advice to teammates is “Don’t take moments you have with your teammates for granted.”

Rylee Holladay was escorted by Ben, Brandi, and Corben Lee along with Beth and Mickey Holladay. Rylee is involved in AB Club, BETA Club, Student Council, HOSA, Math Club, Carroll County Youth Leadership, HHS Softball (4 years), HHS Cheer (1 year). Her future plans include attending Bethel University and majoring in Nursing. Her advice is “Love your teammates as yourself, push each other to be the best you can be, and give thanks to God for every moment on and off the field.”

Kayla Pulling was escorted by her Grandma Madeline Dungey. She was a member of HHS basketball (1 year), HHS volleyball (1 year), HHS softball (4 years) Her plans include getting her real estate license and attending MTSU. Her advice is “Take advantage of every moment and cherish everything because things can happen in an instant.”