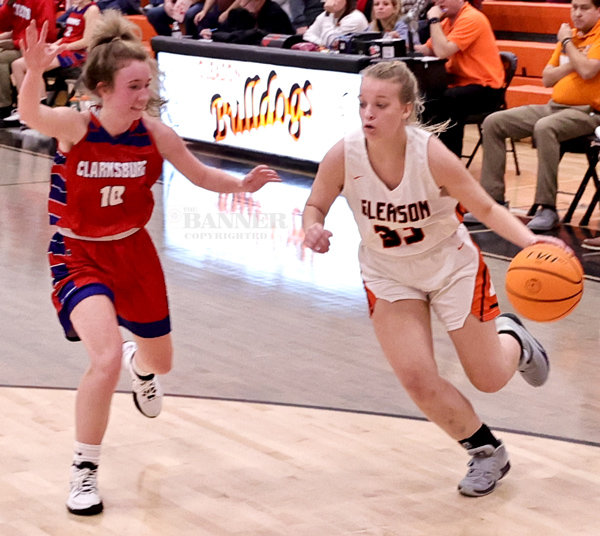 Lady Bulldogs 60, Lady Tigers 20
Gleason’s Alayna Anderson accounted for nearly half of her team’s points with 28 points against Bruceton including four three-pointers. The Lady Tigers jumped out to a 14-4 first period lead and never looked back leading 34-8 by halftime.

The score became 53-14 by the end of three periods with both teams putting in younger players in the final period.

Carrington Lifsey was also in double figures for Gleason with 11 points. Autumn Mingle added five points while Tinsley Parkins and Sophie Wilson had four points each. Maya Lamb had three points along with Jaeda Perry and Madi Dean with two points each. Ava Sawyers chipped in a point for Gleason.

Bulldogs 63, Tigers 38
The Bulldogs opened up a 17-8 first quarter lead and held on to the lead despite a second period push by the Tigers that resulted in a 30-21 halftime score with the Bulldogs still in the lead.

Gleason pulled away in the third period leading 49-29 at the end of the period and finishing the win.

Bruceton was led by Caleb Haskin’s 23 points. Preston Hollingsworth and Cameron Lowe added four points each while Joselito Santiago had three points for the Tigers. Dakota Glover and Gavin Johnson chipped in two points each.

Lady Bulldogs 69, Lady Rockets 40
A 33-point first period was more than enough for the Lady Bulldogs to cruise to a 69-40 win over the visiting Lady Rockets. They led 54-12 at halftime and 66-27 after three periods.

Carrington Lifsey led the way with 34 points including four three-pointers. Jaeda Perry added nine points while Daisy Blevins and Sophie Wilson had five points each. Alayna Anderson and Tinsley Parkins had four points each along with Ava Sawyers with three points. Autumn Mingle, Kaylee Tucker, and Grace Stafford chipped in a point each for the Lady Bulldogs.

Brayden Cobb and Sha Williams led Clarksburg with nine points each followed by Dylan Pruett with eight points. Caden Wood had five points while Stefan Gilbert, Clint Clayton, and Trae Cobb had four points each for the Rockets. Kris Hooker had three points.