DRESDEN (September 17) — Gleason did not come away with the result they wanted in the 41-0 loss to Dresden, but it was a night to memorize the team’s biggest fan, Jimmy Belew, who died on Saturday, September 11. 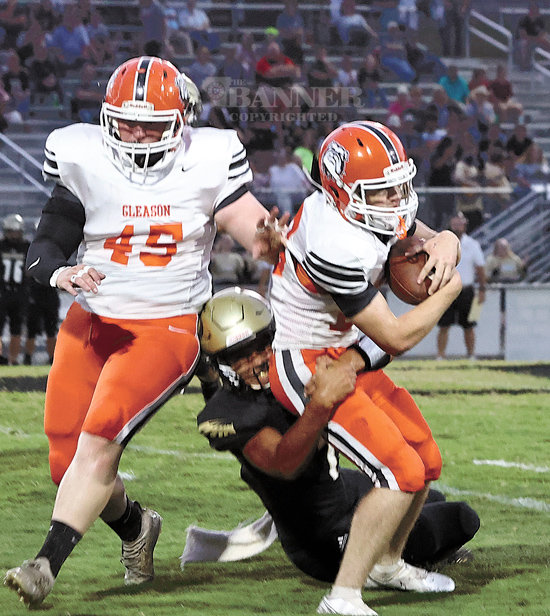 DRESDEN (September 17) — Gleason did not come away with the result they wanted in the 41-0 loss to Dresden, but it was a night to memorize the team’s biggest fan, Jimmy Belew, who died on Saturday, September 11.

Belew, age 77, wore the #22 as a high school player at Gleason. He also wore it to the games he attended in recent years. He also provided encouragement to the players and the fans of the Bulldogs.

The first quarter remained scoreless as both teams moved the ball well.

A fumble by Gleason late in the first quarter gave Dresden excellent field position. A series of plays netted the 30 yards needed to break the endzone for the first score for Dresden. Raymond Johnson rushed for eight yards for the TD and Mark Maddox added the PAT.

Gleason’s Issac Denton earned a first down on a 15-yard rush, before the series sputtered and QB Kolton Crochet punted at mid-field.

Dresden responded with a series of plays, six first downs, and a TD by Tatum Oliver. The PAT failed and the score stood at 13-0.

Gleason ‘s Drake Lovell carried twice, and the team again found themselves at mid-field with a fourth and long situation. Crochet’s punt was received by Trey Eddings, who returned it 16 yards. Dresden went to work, marching downfield, earning three first downs and a TD by Nick Turnbow. Maddox added the PAT and the score was 20-0 at half.

The second half started with a Eddings’ TD and a Maddox PAT to make the score 27-0 at the 10:19 mark in the third quarter. Dresden was again in the endzone at the 8:46 mark on a Tristen Jett TD and Maddox PAT. Tatum Oliver added one last TD at the 6:12 mark with a PAT by Maddox to make the score 41-0, which was the final score of the game.

Both teams had substitutions in the last quarter.

Gleason plays at Greenfield this Friday.