HUNTINGDON (May 7) — Standing on the shoulder of giants. That could easily describe the feelings of the inductees of the Carroll County Sports Hall of Fame. As each received his or her commemorative plaques, each took the opportunity to praise the people and community who supported and encouraged them. It was the coach, the teachers, the parents, or the fans. Obviously, each knew any achievement was through hard work and support of others. 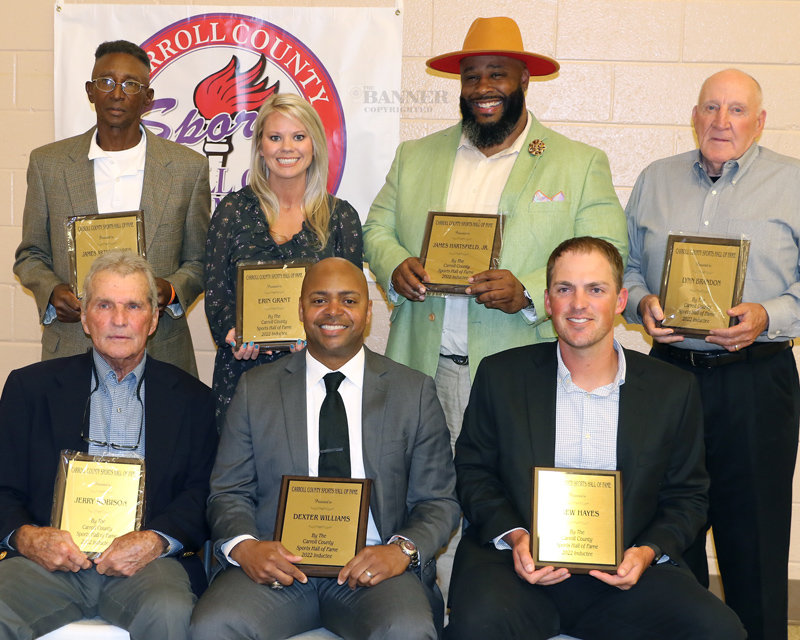 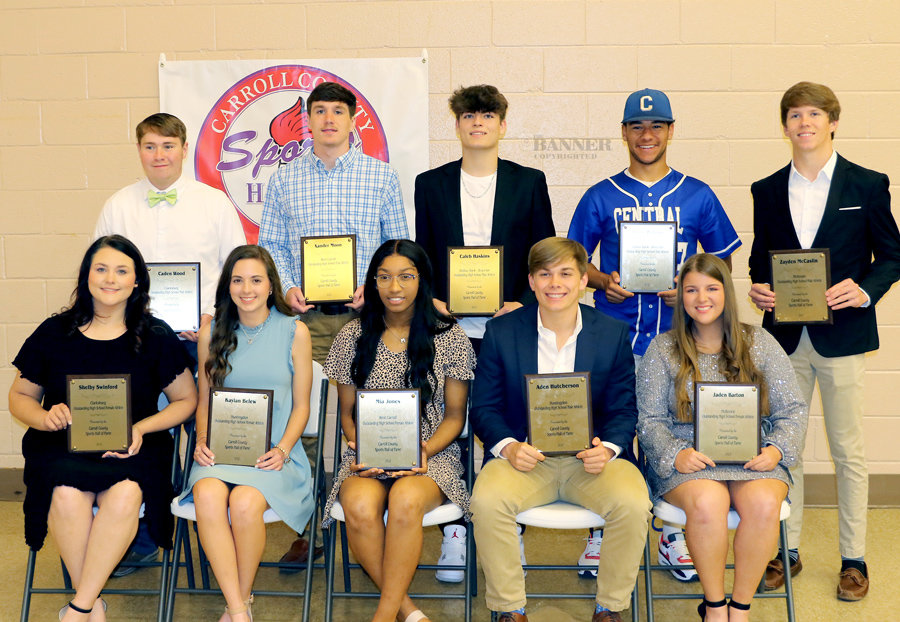 HUNTINGDON (May 7) — Standing on the shoulder of giants. That could easily describe the feelings of the inductees of the Carroll County Sports Hall of Fame. As each received his or her commemorative plaques, each took the opportunity to praise the people and community who supported and encouraged them. It was the coach, the teachers, the parents, or the fans. Obviously, each knew any achievement was through hard work and support of others.

It was the twentieth-year banquet on Saturday at the Carroll County Civic Center. The 2022 class includes one graduate of Clarksburg, Hollow Rock-Bruceton, West Carroll, McKenzie and three from Huntingdon. Ten high school seniors — two from each of the five high schools were also honored for their athletic accomplishments.

Lynn Brandon
Lynn is a 1962 graduate of Huntingdon High School. He played baseball, basketball,and football while in school. He was a three-year starter in basketball, averaging 20 points a game his senior year.

Lynn was the starting quarterback on the football team his junior and senior year. Those two seasons the Mustangs were 19-2 and Volunteer Conference Champions both years.

He was selected All-Volunteer Conference his junior year. After graduation he walked on at David Lipscomb College and made the baseball team. His freshman year, he led the team in hitting and was voted the team’s MVP. He played third base and was the backup catcher. The next year Lynn received a full scholarship at Western Kentucky University.

Erin Grant
Played high basketball for Clarksburg High School for four years, won the district championship junior and senior years, played in a sub-state game senior year, made the all-district and all-region team for four years and made the first team All-West Tenn. Team. She scored over 2,300 points in high school, received a full basketball scholarship to Bethel University and she graduated from the University of Tenn. Martin with a bachelor's and master's degree in Education. She has taught elementary school in Henderson County for the past nine years.

James Harris
James Arthur Harris was a 1976 graduate of Huntingdon High School. He lettered in three sports while in school. Three seasons in baseball, three in basketball, and three in football. He was selected All-District his junior and senior years on basketball. Also, he was voted most improved his junior year.

He started at halfback his junior and senior year in football. He was All-Volunteer Conference and Honorable Mention All-West Tennessee his senior year.

His senior year, the Mustangs were undefeated in the regular season and Volunteer Conference Champions. James was voted Most Athletic in his class. He also umpired high school baseball a number of years.

James T. Hartsfield, Jr.
James T. Hartsifled, Jr.’s biography said, “Who knew that playing tackle football, on church grounds from sunup to sundown would produce football legends? Hollow Rock’s finest brothers, cousins, and friends played football to learn life skills they were to use on the football field and beyond. It was on Mt Nebo’s gravel-laden church grounds where James Hartsfield Jr honed a skillset that produced a decorated football career.”

Drew Hayes
Drew Hayes is a 2006 honor graduate of McKenzie High School, where he excelled as a four-year letterman in football, baseball and basketball.

In his freshman year, Drew, the quarterback, helped guide the Rebels football team to the state semi-finals with an overtime win over Fairview and a week later, a late comeback win over Fairview, followed by a comeback win over Lewis County. When his high school career ended, he was Tennessee’s second-leading passer with 9,292 yards, 738 completions, 1,038 attempts and 72 touchdowns. He holds state and national records for single-game completions (46-74) in the Union City game in 2005. Drew was honored as the Class 1A Mr. Football Award in 2005.

As a Rebel baseball player, Drew lettered all four years. His senior year, he went 13-2 on the mound with 170 strikeouts while posting a .63 earned-run average. He guided the Rebels to the Class 1A state championship title with 12 strikeouts and scored one of the two runs McKenzie posted in that state championship contest.

Drew won the Tennessee Baseball Coaches’ Player of the Year Award and is the first athlete to win Mr. Football and state baseball player of the year in the same school year.

Drew was a four-year letterman in basketball that ended in a 24-4 record and District Championship.

Drew was drafted out of high school by the Arizona Diamondbacks, then by Seattle after his junior year at Vandy. Upon completing his career with the Commodores, he was drafted by the Cincinnati Reds, where he made his Major League debut on August 21, 2016.

Drew graduated from Vanderbilt with a Bachelor of Science degree and double major in English and Education and with All SEC Academic Honors.

After finishing his professional career, Drew taught and was the pitching coach for (Jackson, Tenn.) TCA High School baseball team, which advanced to the state championship game.

Drew is now employed by the Toronto Blue Jays and is the pitching coach for their minor league Dunedin Blue Jays.

In the off-season, Drew resides in McKenzie with his wife, Mariah and their two golden and labradoodles, Reece and Roxy. He also enjoys his hobbies of playing golf and refereeing basketball.

Drew is the son of Joyce and Glenn Hayes of McKenzie.

Jerry Robison
Jerry Robison is a life-long resident of Huntingdon and is a graduate of Huntingdon High School. He participated in several sports and played football at HHS for four years, 1961-1964. The team won three Volunteer Conference championships, the winning record for that time was 35-6. He was named Honorable Mention All-Volunteer Conference in 1964, Honorable Mention All-West Tennessee, and Best Tackler his senior year. In 1965, he was awarded a football scholarship to the University of Martin. He was injured while playing and decided to enlist for service to his country and joined the United State Air Force in 1967 until 1971.

He attended Bethel College and received his degree and was offered the head coaching position in Huntingdon Junior High School from 1974-1978 and also head coach of the freshman team.

During this time, he also coached basketball for the boys and girls teams in 1974-1978 and served as assistant coach in 1974 for the baseball team. In 1979, he was promoted to assistant high school football coach and later in 1980 to the head coaching position until 1983 with a record of 26-15, 63 percent winning. He was the first coach to play on the new Paul Ward football field. Huntingdon won the District 14 championship in 1983 and Coach Robison received Coach of the Year that year.

Dexter Williams
A native of Trezevant, Tennessee and a 1995 graduate, Dexter Williams is recognized for his basketball career as a student-athlete at West Carroll High School and Union University, as well as the impact he has made in the community and Tennessee as a high school coach and education administrator. As an All-State basketball player for West Carroll, Williams led his team to its first-ever state tournament berth in school history for any sport. He received All-District, All-Region, All-West Tennessee, and All-State honors. Williams scored 47 points in a single game while hitting ten three-pointers. He scored 2011 points in his high school career. His high school jersey “number 12” is retired at West Carroll High School. Ranking seventh in his class, Williams received a full-athletic scholarship to play college basketball for the Union University Bulldogs, where he was named All-American Scholar.

In 2008, Williams transitioned into education administration, serving as an assistant principal at Liberty before becoming the principal at Tigrett Middle School. He later served as the head boys’ basketball coach at Milan High School, Human Resource and Transportation Supervisor for Milan Special School District, principal and athletic director at West Carroll Junior/Senior High School and superintendent for the West Carroll Special School District. Currently, Williams is the athletic director and head boy’s basketball coach at Trinity Christian Academy. He is heavily involved in the community, serving as president of the Down Syndrome Association of West Tennessee, advisory board member of Union University EDGE program, head coach of the Jackson, Tennessee Underdawgs and district seven representative for the Tennessee Secondary School Athletic Association (TSSAA) Board of Control.

Williams is married to Amber, a former college basketball player at Lambuth University and current educator at South Gibson County High School. Together they have three children, Kayleigh (17), Kaleb (15) and Karcyn (13). Williams is the son of Anthony (deceased) and Josephine Williams of Trezevant, Tennessee.