Christmas and New Year brings a lot of things including family get-togethers, plenty of gifts and of course plenty of holiday basketball action including the annual Huntingdon Point Guard Christmas Tournament which usually features a number of good Girls and Boys teams. 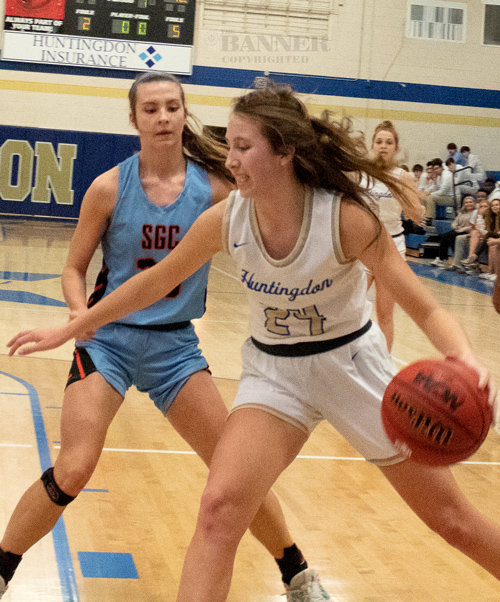 Lilly Kee (24) works the baseline for a shot against South Gibson.
Photo by Jessa Potts 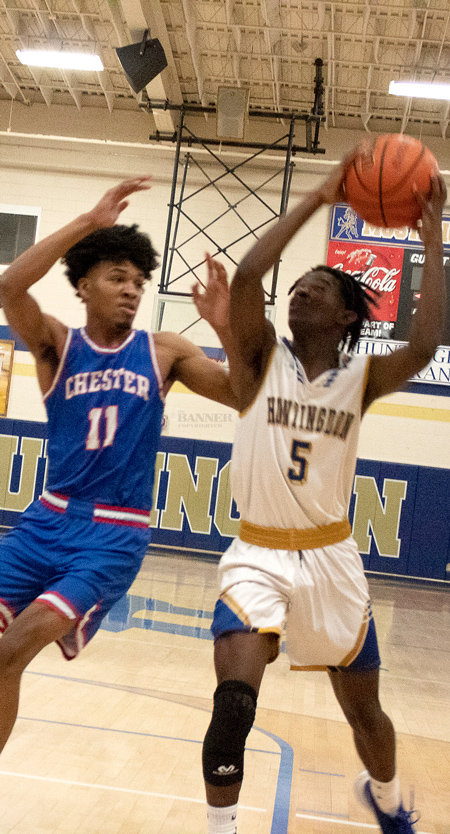 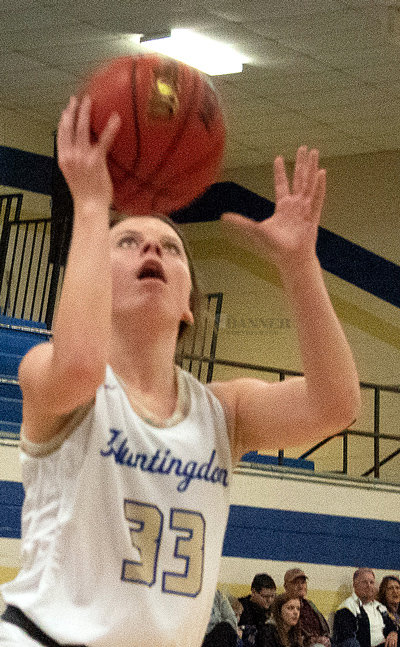 Christmas and New Year brings a lot of things including family get-togethers, plenty of gifts and of course plenty of holiday basketball action including the annual Huntingdon Point Guard Christmas Tournament which usually features a number of good Girls and Boys teams.

December 28: Quarterfinals
The tournament tipped off at 9 a.m. last Tuesday, December 28 with a girls’ contest between South Gibson and Dyer County. It was a close low scoring affair which the Lady Hornets won 47-43 to advance in the winner’s bracket. An even lower scoring close boy’s game followed with USJ clipping Waverly 38-36.

West Carroll’s Lady Eagles gave Chester County all they wanted before losing a 43-38 in the noon contest.

The first contest with a double-digit margin came with South Gibson’s Hornets taking the sting out of the Greenfield Yellow Jackets 62-50. Camden’s Lions posted a lopsided 60-44 win over Riverside’s Lady Panthers setting up a rematch with a team they have already faced twice during the regular season. Riverside’s Panthers came up on the short end of a 73-51 barrage from Chester County’s Eagles. The nightcap games involved both Huntingdon teams and both Collinwood teams.

Fillies 67, Collinwood 51
The Fillies played host to the Lady Trojans which started off a bit slow with Huntingdon leading 14-8 at the end of the first period. Collinwood got hot and tied it several times early in the second period. Both teams were applying full court pressure to each other creating turnovers. The Fillies led 32-26 at halftime.

The Fillies had three in double figures led by Lilly Kee with 25 points followed by Delaney Byars with 14 points and Sophie Singleton with 12 points. Sydney Anderson added seven points. Lia Fuller and Josey Stokes had four points and three points respectively while Ashlyn Rich chipped in two points for Huntingdon.

Collinwood had several players contribute points but only one in double figures. Harlee Haddock had 11 points followed closely by Alyssa Gay and AC Whitehead with nine points each. Tessa Statam had eight points. Hayley Siems had seven points along with Kaycee Luker with four points. Danley Bray and Cimmie Willis chipped in two points and one point respectively.

Mustangs 49, Collinwood 45
The nightcap game between the Mustangs and Trojans was a barn burner from the tip until the end. Both teams got off to a slow start with no score until Collinwood nailed a three-pointer with just under five minutes remaining in the first period. Huntingdon answered with a basket of their own and it went back and forth until the Mustangs took a 10-6 lead at the end of the first period.

Huntingdon extended the lead to 17-11 by the halfway point in the second period but Collinwood roared back and tied it 19-19 with a minute left until the half. Both teams swapped baskets and were tied 24-24 at halftime.

The scoring remained slow in the early part of the third period as both teams swapped baskets and were tied 32-32 with 1:30 left in the period. The Mustangs went on a 6-0 streak to finish the third period with a 38-32 lead.

In the fourth period, points were again hard to come by as the Mustangs stretched the lead to 41-34 with five minutes remaining. The Trojans came right back over the next two minutes and made it a 41-40 game with three minutes remaining. The two teams swapped three-pointers with just over a minute to play with Huntingdon leading 46-45. The Mustangs sealed the win taking care of business at the free throw line.

The Mustangs were led by Jeb Atkinson and Ty Kelley with 16 points each. Keller Smith added seven points while Kaleb Pearson had five points for the Mustangs. Jeremiah Irvine and Aden Hutcherson chipped in three points and two points respectively.

December 29: Semi-Finals
The first day’s contests set up interesting matchups for the second day in boys’ and girls’ action. Dyer County’s Lady Choctaws and West Carroll’s Lady Eagles tipped things off with a lopsided 78-27 contest in favor of Dyer County. Riverside and Collinwood boys came next with another lopsided game with the Panthers winning 71-41. Riverside and Collinwood girls had the first close contest of the day with the Lady Trojans winning 62-55. Waverly’s Tigers rolled over Greenfield’s Yellow Jackets 67-32. South Gibson’s Lady Hornets defeated Chester County 57-29. The closest game came on Wednesday afternoon with USJ’s Bruins squeaking by South Gibson 33-32.

Fillies 67, Camden 43
Huntingdon went into action starting with the Fillies playing the Camden Lady Lions for the third time this season. They split the two earlier games with Huntingdon winning at home and Camden winning at home.

The Fillies built an early double digit lead but Camden erased it by the end of the period making it a one point game 18-17 after one period. In the second period, Huntingdon rebuilt their double digit lead taking a 35-25 lead with 1:30 left until halftime. They led 37-25 at the half.

Huntingdon kept a comfortable lead through the third period leading 42-30 at the halfway point and 51-32 at the end of three periods. Things got chippy between the two teams in the fourth period with technical fouls being called on both teams while the Fillies outscored the Lady Lions 16-13 during the period to finish the win 67-43.

Three Fillies were in double figures with Sophie Singleton leading the way with 19 points with a bunch of her points coming from 10-14 shooting at the free throw line. Josey Stokes and Annabelle Singleton added 15 and 13 points respectively. Sydney Anderson and Delaney Byars had five points each while Lilly Kee and Lia Fuller had four points each. Ashlyn Rich chipped in two points for Huntingdon.

Camden had two in double figures with Bailey Morris and Rylee Rushing having 12 points and 10 points respectively. Faith Wallace and Jayden Staggs added six points each while Lauren Burkett had five points. Trinity Woodard and Adalyn Furr chipped in two points each for the Lady Lions.


The Mustangs played host to the Chester County Eagles in the nightcap game which included more technical fouls and a fan being removed from the game.

In the first period, neither team scored until the 5:30 mark. Chester County took a lead 12-4 at the end of one period. The Eagles outscored Huntingdon 18-11 in the second period to post a 30-15 lead at halftime.

After halftime, the Mustangs came out hot outscoring the Eagles 15-8 during the third period to make it a 38-30 game heading into the final period. It was the fourth period players and fans alike became frustrated with the officials which resulted in several technical fouls and a fan being removed from the game.

Both teams put up a bunch of points in the final period with the Eagles barely outscoring the Mustangs 24-22 during the period. Chester County went on to win 62-52.

Chad Barham led the Eagles with 19 points followed by Austin Ketchom with 14 points. Amaria Massengill had seven points while Michael Pirtle had six points. Aidan Welch and Zane Bolton had five points each. Carter Welch, Quadarius Gaines, and Hunt Pipkin chipped in two points each for the Eagles.

The Mustangs went scoreless in the first four minutes of the second period while South Gibson widened the lead to 23-15. Both teams played evenly the remainder of the half but the Hornets still maintained a 29-20 lead at halftime.

Huntingdon was still in striking distance halfway through the third period trailing 37-26 however the Hornets outscored the Mustangs 12-3 during the remainder of the period to blow it open to a 49-29 lead by the end of the period.

South Gibson outscored Huntingdon 18-15 in the final period to secure the 67-44 win.

Several Mustangs contributed in scoring but none scored in double figures. Kaleb Pearson and Ty Kelley led the way with nine points and seven points respectively. Ethan Ramsey had six points while Jeremiah Irvine had five points. Jeb Atkinson and Landon Gordon had four points each. Ashton Hutcherson and Noah Smothers came off the bench adding three points each while Aden Hutcherson and Keller Smith chipped in two points and one point respectively for the Mustangs.

Makell Melton and Camden Lockett led the way for South Gibson with 22 points and 18 points respectively. Ryland Giles added eight points for the Hornets. Jacob Williams had five points. Sam Brantley had four points. Bryson Robbins and Noah Clouse had three points each while Ashton England and Cameron Clark chipped in two points each for the Hornets.

Girls Championship: Huntingdon vs South Gibson
South Gibson led for three periods before the Fillies got hot in the final period erasing a 12-point deficit and winning the Point Guard Title.

The Lady Hornets opened with a 10-5 lead in the first four minutes of the game and stretched it out to 22-13 by the end of one period. The Fillies closed it to a 25-20 deficit with a little over four minutes left in the half and trailed 38-31 by halftime.

South Gibson outscored Huntingdon 12-7 in the third period putting the Fillies in a 50-38 hole headed into the fourth period.

It apparently didn’t rattle the Fillies because they started the final period with back to back three-pointers enroute to tying the game 50-50 with five minutes to play. The Lady Hornets broke the tie with a basket 52-50 but the Fillies answered with a big three-pointer to take the lead again 53-52 with 3:45 to play. The Fillies got a steal and scored making it 55-52 with just under three minutes to play. The two teams swapped baskets over the next minute making it 57-54 at the two minute mark.

Huntingdon was up 59-57 with 1:10 to play and drained nearly 50 seconds off the clock passing the ball around before South Gibson fouled. Huntingdon sealed the win hitting a pair of free throws to go up 61-57 which turned out to be the final score.

Boys Championship: USJ vs Chester County
You talk about a slow start to a championship game, this boys’ game didn’t have a score for the first 4:30 of the opening period and it was only 3-2 at the end of one period with Chester County leading.

The game was tied 3-3 with 6:30 left in the second period when USJ took it over building a 16-8 lead by halftime. The Bruins maintained a lead through the third period leading 28-20 heading into the fourth period.