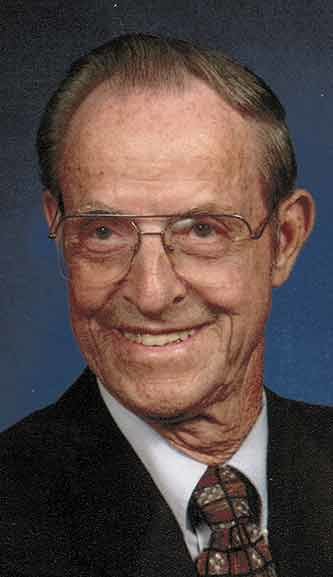 McKENZIE, Tenn.   - Funeral services for Mr. John David Barker are Saturday, January 29, 2022, 2 p.m. at the First Baptist Church McKenzie. The family will receive friends on Saturday at the church from 1 p.m. until service time. Interment will follow at Mt. Olivet Cemetery-McKenzie.

Mr. John David Barker, 97, went to be with his Lord on January 25, 2022. He was born on October 8, 1924, in the Big Buck Community of Carroll County, Tenn. and graduated from McLemoresville High School in 1943. He entered the U.S. Navy in June of 1943 and participated in the invasions of both Saipan and Guam. On January 3, 1948, he married Robbie Coleman. Mr. Barker attended both Bethel University and the University of Tennessee at Knoxville.

He was a certified civil engineer and served the Tennessee Department of Transportation as the state, region four, engineer in charge of all utilities in West Tennessee; serving his state for 48 years before requesting to return part-time as an engineering consultant for an additional 12 years. He received outstanding achievement awards from Tennessee governors Ray Blanton, Lamar Alexander, and Ned McWherter, the Tennessee Institute Certificate for the Public Service Management Institute and held one of the first Tennessee Land Surveying licenses, license # 84.

In his retirement, he developed the John D. Barker Place subdivision in McKenzie. His community and church activities were legion. He worked tirelessly with United Neighbors and other charities and taught Sunday School, worked on many church committees, and served as an usher for many years at his beloved First Baptist Church in McKenzie.

He loved his wife and family and was proud of their accomplishments. He has left a legacy of rock-solid personal values, ethics and beliefs.