McKenzie Baseball celebrated Senior Night, Tuesday, April 26 between games against McEwen. Three Seniors were celebrated along with their families. 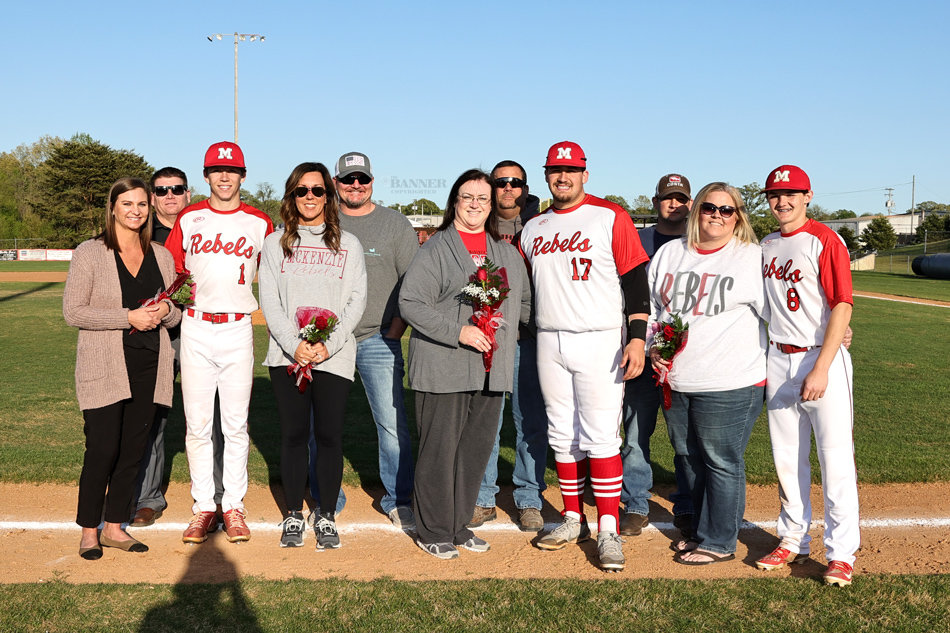 McKenzie Baseball celebrated Senior Night, Tuesday, April 26 between games against McEwen. Three Seniors were celebrated along with their families.

The first senior is Zayden McCaslin. Zayden is the 18-year old son of April and Pat Minor and Derrick and Sabrina McCaslin. He is a 4-year member of the Rebel Baseball team. Zayden is a 3-year honor student, voted Most Athletic by his senior class, voted Carroll County Hall of Fame, and received the Rotary Scholarship. He is also a member of FCA, Beta Club, Student Council, M-Club, and McKenzie Maniacs.

Zayden has a career batting average of .344, a .460 on base percentage, and defensively has 124 assists and 63 put outs. He plans to attend Bethel University to play baseball and major in Physical Therapy.

Jake has a career batting average of .420 with 11 homeruns and 75 RBIs. On the mound, he has 7 career wins with a 3.09 ERA. He plans to attend Bethel University to play baseball and major in Criminal Justice.

The final senior is Collin McLearen. Collin is the 18-year old son of Mickey and Autumn McLearen. He is a 4-year member of the Rebel Baseball Team. Collin is also a 4-year honor student, voted most likely to bring home to mom by his senior class, a member of the Beta Club, and a Senior Class Officer.

Collin has a career batting average of .396 with 42 runs scored, a .491 on base percentage, and a .967 fielding percentage. Collin plans to attend MTSU to major in Aerospace to pursue a career as a pilot.