MURFREESBORO (May 29) – This headline really doesn’t do justice to the kind of game that was played on Sunday, May 29 for the Class A State Championship at Riverdale High School. 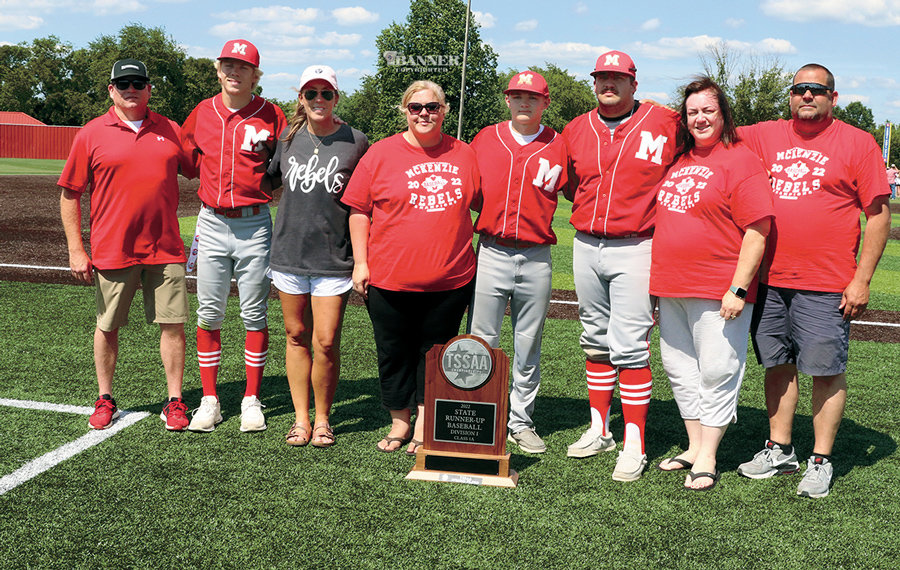 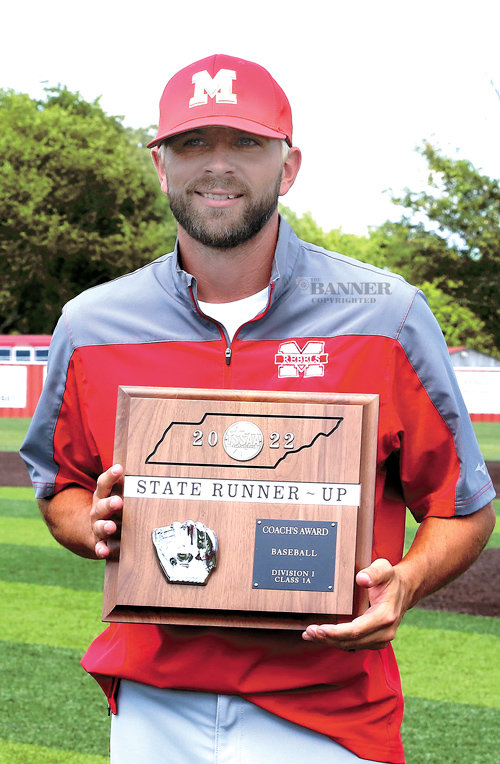 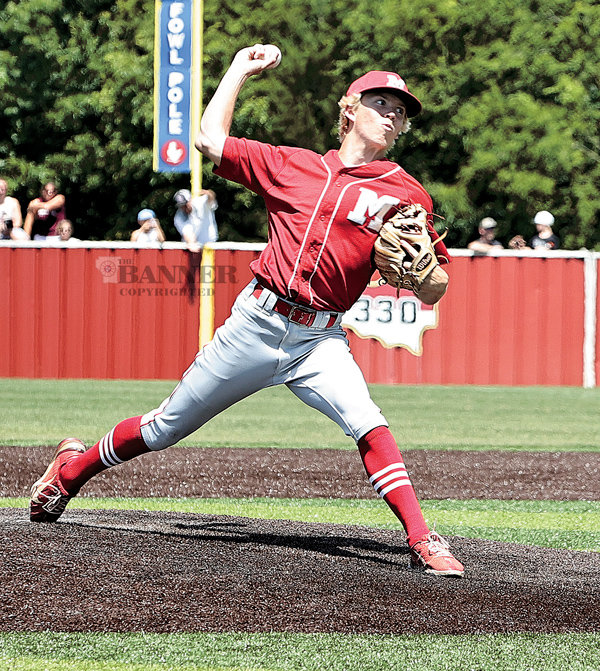 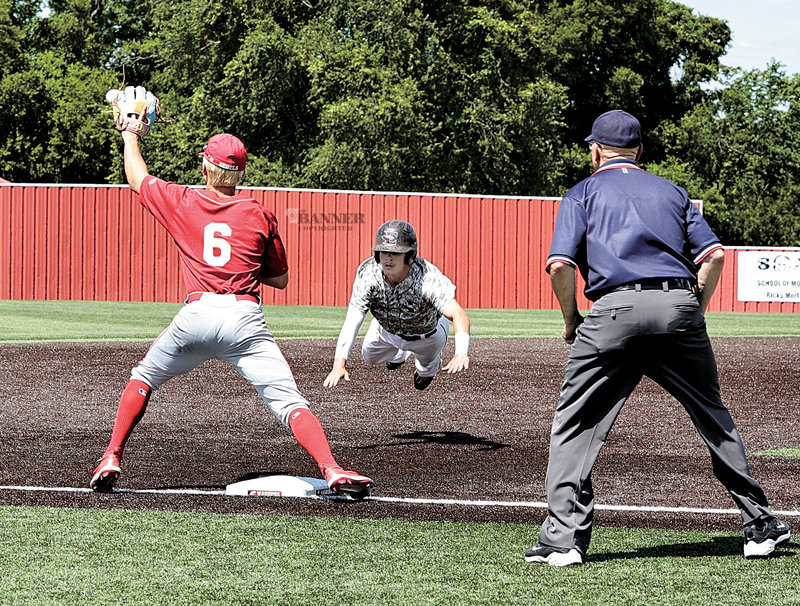 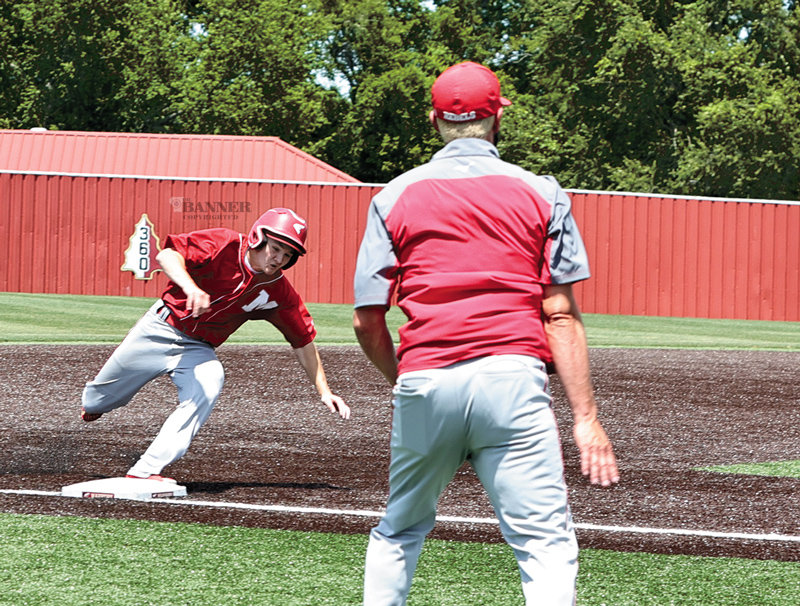 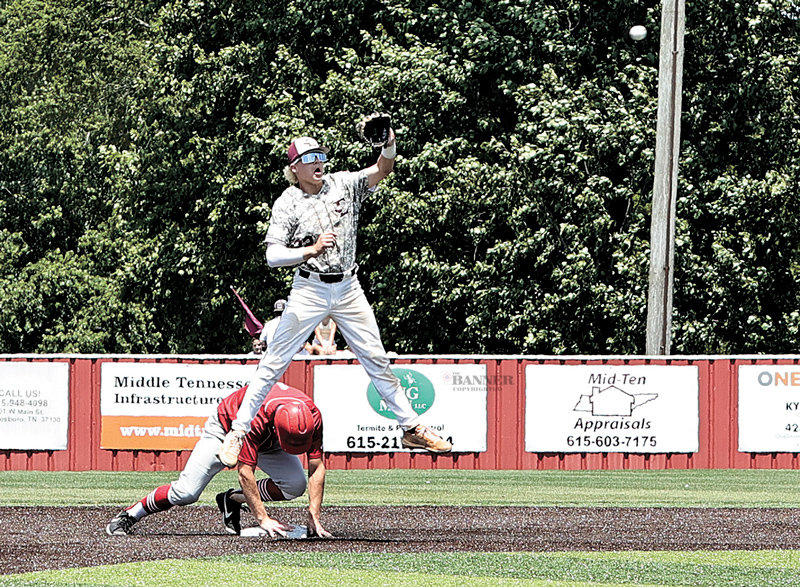 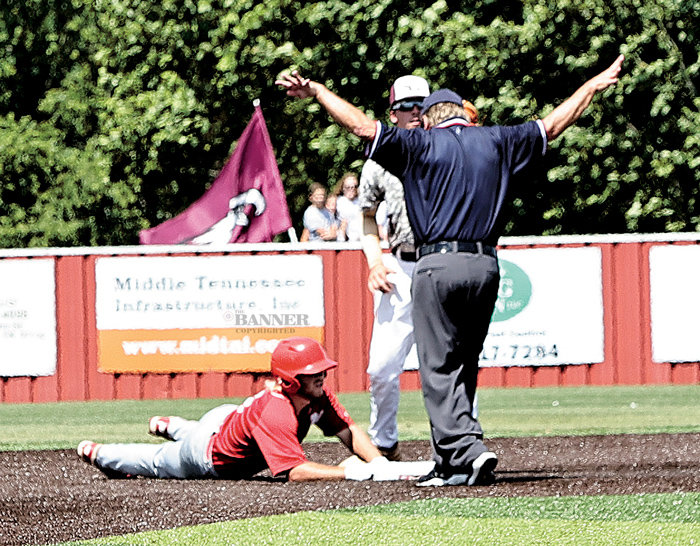 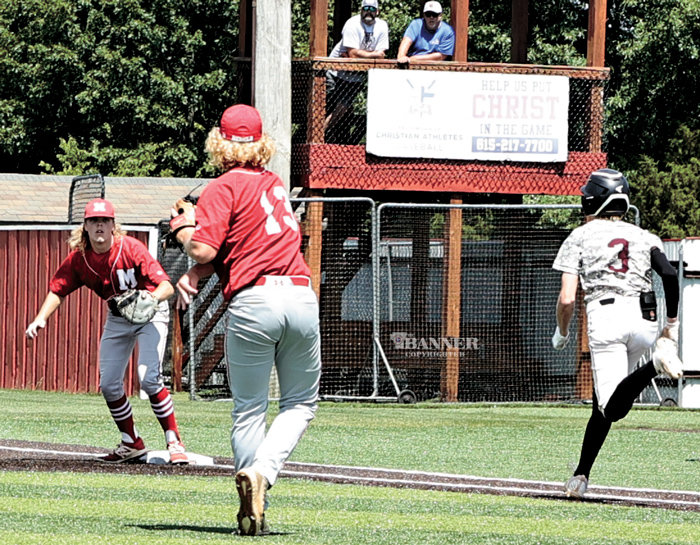 Lane Anderson throws to Nolan Renfro for an out.
Photo by Joel Washburn/The Banner
Previous Next
Posted Tuesday, May 31, 2022 5:33 pm
By Jim Potts
jpotts@mckenziebanner.com
MURFREESBORO (May 29) – This headline really doesn’t do justice to the kind of game that was played on Sunday, May 29 for the Class A State Championship at Riverdale High School. The Rebels had put far more time on the field during the tournament than Eagleville. This would be McKenzie’s sixth game of the tournament and they were getting low on pitching. Eagleville had nearly two days rest and came into this game with a 36-2 record with some really gaudy stats. Despite all of this, the Rebels came to play ball after winning a doubleheader against Trenton less than 24 hours before.
McKenzie was the visiting team and batted first. Collin McLearen and Hayden Hixson started things off with base hits to right field putting two runners on with no outs. The next three batters were out on two strikeouts and a fly out leaving two runners stranded.
Freshman Tate Surber stepped on the mound in the bottom of the first inning and went to work. Eagleville’s leadoff hitter reached base on a fielding error. Catcher Jackson Cassidy threw out the runner at second. After hitting a batter, Surber forced a groundout and a strikeout to end the inning with the score 0-0.
The second inning was short with both pitchers settling in and both teams only managing one runner on base with the score remaining 0-0 at the end.
It was the third inning the Rebels started figuring out the Eagleville pitcher and taking advantage of it. Collin McLearen led off with a hard single to right field followed by a Hayden Hixson single to center field. Jake McDaniel singled on a hard ground ball to right field scoring McLearen for a 1-0 Rebel lead. Jackson Cassidy grounded into a fielder’s choice scoring Hixson for a 2-0 lead. Zayden McCaslin drove Cassidy home on a single. McCaslin got caught off base and was thrown out. McKenzie finished their half of the inning with a 3-0 lead.
Eagleville went three up and three down in the bottom of the third with no one reaching base.
Eagleville changed pitchers at the top of the fourth and the Rebels went three up and three down. In the bottom of the fourth, trouble started brewing when the leadoff hitter for Eagleville sent a fly ball over the centerfield wall for a home run. Surber walked the next two batters. Zayden McCaslin came in at pitcher while Surber stayed in the field. McCaslin was facing bases loaded with no outs and hit the first batter scoring a run. He hit the next batter as well scoring another run making it a tie game 3-3. The next batter walked scoring the go-ahead run for a 4-3 lead for Eagleville. Sophomore Lane Anderson came in to pitch at this point and got the outs to end the inning.
McKenzie couldn’t get anything going offensively in the top of the fifth but kept Eagleville at bay as the fifth inning ended with no score. Eagleville led 4-3.
The Rebels got two runners on in the top of the sixth but left them stranded as the last three batters got out.
Eagleville added a run on a base hit giving them a 5-3 lead at the end of six innings.
McKenzie went three up and three down in the top of the seventh inning as Eagleville claimed the Class A State Championship after a hard fought game.
Coach Wall received the Coach’s Trophy for the Runner-up team and the seniors Zayden McCaslin, Jake McDaniel, and Collin McLearen claimed the Runner-Up Award for the team. Coach Wall gathered the team in and told them he loved them and he was very proud of them and their efforts to get as far as they did. The Rebels finished 27-8 on the season and say goodbye to three solid seniors in Zayden McCaslin, Jake McDaniel and Collin McLearen. McCaslin and McDaniel have signed baseball scholarships to Bethel University.
Just a couple of views from what I witnessed during the week with the Rebels in Murfreesboro. They came to play ball and never gave up when their backs were against the wall. They supported each other and they are a close group. It was tough watching them shed tears but understandable at the same time with the efforts they put into the whole season and going to Murfreesboro and play six games including two doubleheaders in a short period of time and one of those doubleheaders was win or go home. The school is proud of them and the town is proud of them.
The roster included: 1 Zayden McCaslin, Sr.; 2 Carter Kee, Fr.; 3 Hayden Garrett, So.; 4 Jake Cassidy, So.; 5 Brayden Birmingham, Jr.; 6 Hayden Hixson, Jr.; 7 Tate Surber, Fr.; 8 Collin McLearen, Sr.; 9 Ty Anderson, Jr.; 10 Colt Norden, Fr.; 11 Jackson Cassidy, Jr.; 12 Nolan Renfro, Jr.; 13 Lane Anderson, So.; 14 Craegen Travis, Fr.; 15 Dawson Brush, So.; 16 Kadarius Cunningham, Fr.; 17 Jake McDaniel, Sr.; 18 Drew Chappell, So.; 19 Carter Swalley, Fr. Coaches are Chris Wall and Zach Tippitt.