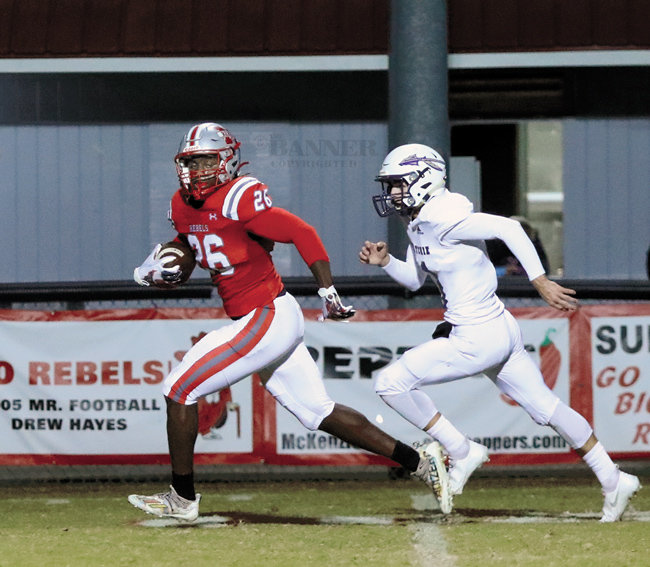 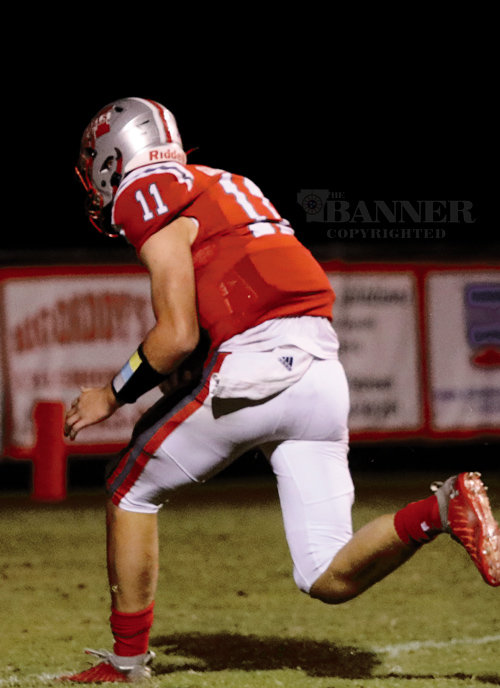 McKenzie’s Rebels had an eventful week coming off of a bye week. Last Tuesday, Bruceton called and canceled the region contest on Friday night. The Tigers did not have enough players due to injuries and COVID. On very short notice, McKenzie was able to schedule Sequatchie County, a triple-A school, from near Chattanooga to play at McKenzie and give the Rebels an extra home game.

The Rebels won the toss and deferred to the second half giving the Sequatchie Indians the ball first to start the game. The Rebel defense forced a three-plays-and-out series keeping the Indians hemmed up inside their 30-yard line.

After a 40-yard punt, the Rebels took over and started moving the ball on the ground mixed with a couple of passes during the drive. Marquez Taylor capped off the 12-play drive with a 10-yard touchdown run with 4:50 left in the first quarter. Zach Aird’s PAT was good for a 7-0 McKenzie lead.

On their ensuing possession, Sequatchie started finding running room moving the ball out to their 35-yard line. The Indians went to the air and were intercepted by Etijay Tharpe who returned the ball 38 yards to the Sequatchie 7-yard line. Quarterback Jackson Cassidy went up the middle on first down and scored on a 7-yard run with 2:14 left in the opening quarter. Aird’s PAT was good for a 14-0 Rebel lead.

The Indians went two plays into their next possession and fumbled the ball with Rashad McCreary scooping it up and returning it 26 yards to the Sequatchie 6-yard line. Taylor scored his second TD of the night on the second play with a 3-yard run with :09 seconds left in the first quarter. Aird connected on his third PAT giving the Rebels a 21-0 lead at the end of the first quarter.

The Indians put together a drive that went from their own 33 to the McKenzie 13 where the Rebel defense forced them into a fourth-down play which was an incomplete pass and the ball went over on downs back to the Rebels.

McKenzie took the ball from their own 13 to near midfield before having a pass intercepted by a Sequatchie County defender. Thanks to the Rebel defense, the Indians were not able to do anything with the possession and punted back to McKenzie.

The Rebels kept it on the ground on this possession with Taylor and McCreary carrying the load. McCreary ripped off a pair of long runs setting the Rebels up with a first and goal at the Indian 7. Cassidy kept it and went 5 yards for his second touchdown of the night. Aird’s PAT was good extending the Rebel lead to 28-0 with 1:01 left until halftime and that was the halftime score.

The Rebels took the ball first to open the third quarter receiving a short kickoff at their own 38-yard line. Two plays into the possession, Marquez Taylor swept to the left side running for 30 yards down to the Sequatchie 16-yard line. After a Rashad McCreary run for 16 yards, Taylor scored from the 2-yard line with Aird’s extra point kick good with 10:30 left in the quarter.

Sequatchie County got on the scoreboard a few plays into their next possession with their quarterback getting loose down the right sideline for a 67-yard touchdown with their extra point good for a 35-7 score.

McKenzie answered that scoring drive with another one of their own on a short drive. Taylor ripped a pair of runs good for 25 and 21 yards and Rashad McCreary capped it off with a 20-yard touchdown run with Aird’s extra point good with 6:36 left in the third quarter setting off the mercy rule with a running clock the remainder of the game.

Both teams swapped possessions the remainder of the third quarter and all of the fourth quarter with the final score being 42-7 giving the Rebels their 9th win.

Numberwise, McKenzie rolled up 330 yards in offense while holding Sequatchie County to 153 offensive yards. The Rebels rushed for 286 yards while holding the Indians below a hundred yards rushing. The Rebels had two rush for over 100 yards. Marquez Taylor had 163 yards on 20 carries and three touchdowns, Rashad McCreary had 7 carries for 107 yards and a touchdown. Jackson Cassidy had 3 rushes for 14 yards and scored a pair of touchdowns.

Next week, McKenzie finishes the regular season with a region contest against McEwen. It will be senior night for senior football players, cheerleaders, and band members.