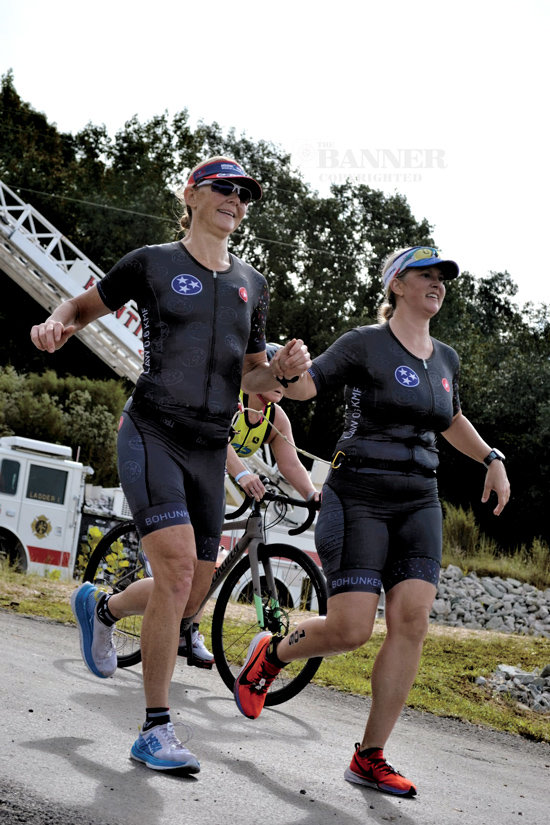 Amy Dixon, foreground, and Kirsten Sass, attended the McKenzie Nights on Broadway to tell the audience how much they appreciated their support during the Tokyo Paralympics. 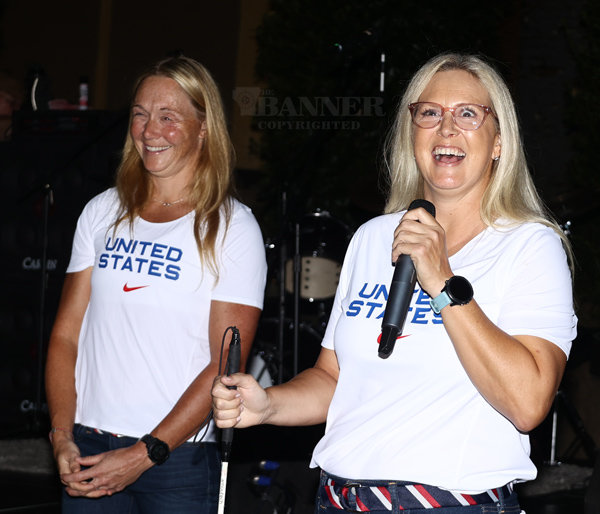 Among the many competitors were two Olympic trained athletes, one of whom resides in McKenzie, Kirsten Winkler Sass. The other is a paralympian, Amy Dixon of San Diego, California. The two compete in world competitions. Dixon is mostly blind and her sighted athlete guide is Kirsten, a world champion athlete.

On Thursday evening, the two appeared in McKenzie at the Nights on Broadway. They thanked the community members for the outpouring of love and support for their competition in Tokyo. Dixon said she was very grateful for her adopted Tennessee home, where her guide resides.

On Saturday, the two competed in the Dixie Triathlon. Kirsten helps Amy run and swim by serving as her eyes. On the bike portion, the two ride a tandem bike, a bicycle built for two.

Amy offered these comments. “Today, I got to race the best of America. Not the most elite athletes, not the fanciest bikes, not the giant televised production of the Olympics, but America’s best. The small towns of McKenzie and Huntingdon put on quite a show for me today and all who dare to brave this hilly course.”

“People made signs, set up chairs on their country lawns, made delicious barbecue, made handcrafted medals and awards from local wood and pottery. Kids, seniors of every ability smiled. They were inspired by Kirsten (Sass) and I to push up hills when we came flying past on the bike. They took a moment to cheer us as we came back from our run. They asked for stories of Tokyo. They bragged about their hometown hero, my guide Kirsten Sass and how proud they were to have a paralympian in their midst. Her husband, Jeff, dressed as Elvis and sang our National Anthem.

“The local firefighters (Huntingdon) raised our beautiful flag high above the finish for all to look at so proudly. In was the best of America today. I’m so glad I came to Tennessee this weekend. In was the post-Tokyo, moral compass, feel-good hometown race that my mind and body needed. This is why I love this country, this community, these people, this sport. What a day indeed....”