About 10 or 11 years old, I became enamored with the game of golf. By seventh-grade, I had enough sense to realize there were not any 5’7’’ centers in the NBA or 115-pound … 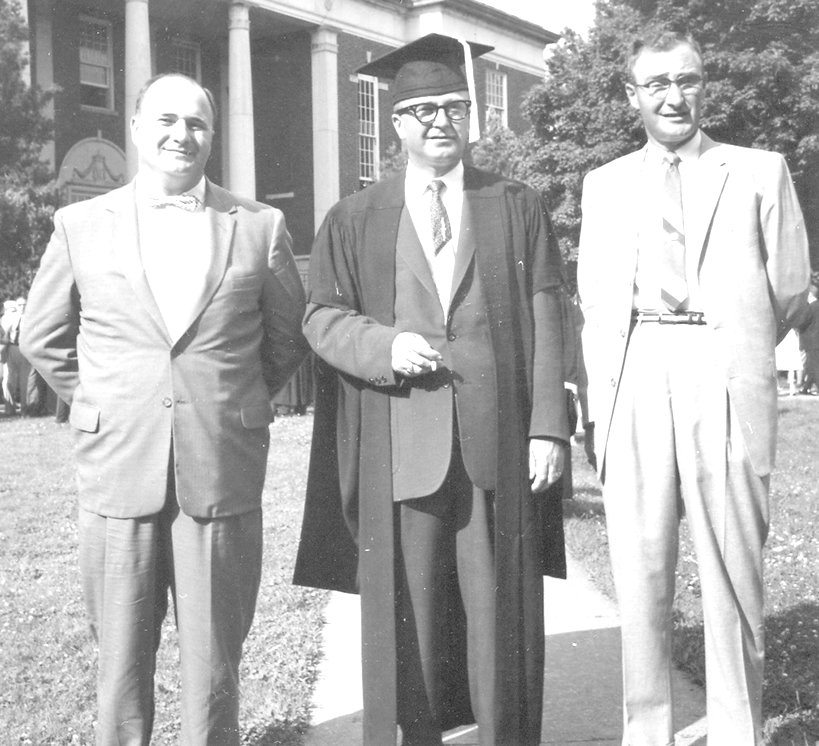 Red Summers was one of four children. Pictured (L to R) are three of the brothers; R. B. Summers, C.H. “Red” Summers and Ray Summers. 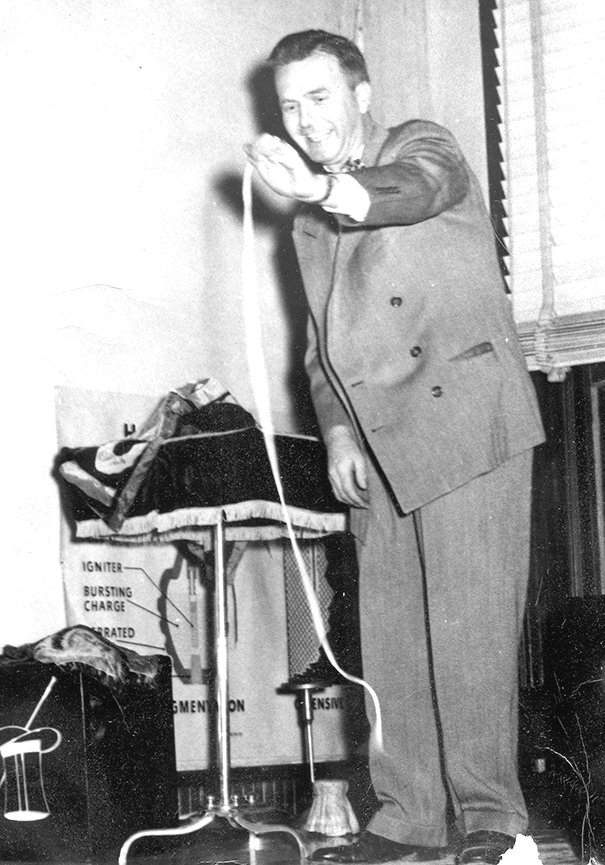 McKenzie Businessman and Magician, Red Summers is pictured in the early 1950s. The greatest magic trick of his career attracted one of the largest crowds in McKenzie at that time.
Previous Next
Posted Tuesday, September 29, 2020 12:52 pm
By Jason Martin

About 10 or 11 years old, I became enamored with the game of golf. By seventh-grade, I had enough sense to realize there were not any 5’7’’ centers in the NBA or 115-pound linebackers playing at USC (I’m still that tall, but a tad bit heavier); so maybe I needed to focus on playing golf. The decision paid off as I was offered a pretty lucrative scholarship to beat the little white ball down a cow pasture.
Top-of-mind there are at least half-a-dozen folks that helped develop my early passion for the game. One of the most influential and nurturing was Red Summers. To walk through Red’s shop was like maneuvering through a minefield. Usually situated in his cubby hole, amongst what had to be thousands of golf clubs, Red set in his chair watching television or reading.
He was always the gentleman and had a club or putter ready that was going to change my game. As my ability and need for more technologically advanced clubs outgrew his cache, he became more of a mentor and friend. It was there, I learned about hitting a low trajectory shot and taking advantage of bouncing the ball off cart paths for extra distance.
My time with Red also produced stories of his time earning his doctorate, the early years of Bethel College golf, and the art being a salesman. He had a story or joke ready for any occasion.
Curtis Hopper ‘Red’ Summers was born on October 11, 1914, in Henry, Tennessee. He was one of four children and at the age of 15 decided to drop out of school and leave home. He began working at a filling station for a quarter a day.
In 1934, Red moved to McKenzie where he worked at the cheese plant for two years before marrying Laverne Scott. The couple moved to Lebanon, Tennessee. Where he opened his own cheese plant before going into the insurance business.
The business took him to Gallatin and Murfreesboro and back to McKenzie. In 1943, he called it quits on insurance and started C.H. Summers Wholesale Candy and Sundries.
In 1952, Red married Wanda Johnson. He was quoted as saying he courted her (after his 1950 divorce) relentlessly before she finally agreed to go on a date with him. They were married 40 years before her death in 1993.
After earning his G.E.D. in 1955, McKenzie School Superintendent W.O. Warren encouraged Red to enroll in classes at Bethel College. In quiet protest, he enrolled and graduated in two-and-a-half years. It was then on to Murray State where he completed his master’s degree and began teaching at Bethel.


From 2005 interview Red said, “I taught business, economics and some sociology. I told somebody I taught everything but the Bible.” While still teaching and running his candy and sundries business, he earned a doctorate from then Memphis State.
“It took me four years to get it. That doctorate almost got me. If it hadn’t been for my wife, I don’t think I’d have made it; she encouraged me in every way she possibly could,” he said.
He taught at Bethel for 20 years before retiring in 1980 and later came back a number of years later to teach for three semesters. Red claimed to be a hard but fair professor. For several years, he was the sponsor of the Omega Phi fraternity and was responsible for starting the golf team at Bethel College.
Outside of business and golf, he was known as a master magician. Red proudly carried a card that proclaimed him to be an honorary member of the Brotherhood of Magicians in the Order of Merlin-Excalibur since 1948. Known for his impressive sleight of hand and he had two tricks he promised never to share. One he was magically placing a dollar bill in a lemon and the second trick he claimed to have been performed in Kentucky sending a car dealer to the hospital with a heart attack.
The trick was first performed in McKenzie in 1956 as a publicity stunt for Russell Chevrolet-Oldsmobile. It centered around the theme that the ‘56 Oldsmobile is so easy to drive that even a blind man could drive it, a blindfolded and masked Summers took the wheel and drove the new Oldsmobile through town. His eyes were covered with silver dollars with molding clay added to further prohibit his vision. A blindfold, doubled eight times, was then applied over his eyes, followed by a black cloth bag placed over his head. Mayor Hearn, a minister from McKenzie, and the Gleason mayor were seated in the back seat to verify that Summers actually accomplished the trick. Summers drove the car from the dealership on Highland Drive, through downtown and back to the dealership as astonished crowds lined the streets along the route.
Over the years, he had traveled to Europe. His first trip came as part of President Eisenhower’s “People to People” goodwill program in a three-week tour of ten-plus countries, including Russia, that took him to both sides of the “Iron Curtain.”
Red said of his trip, “That was scary. I couldn’t believe the things I saw.” He reflected on the concrete blocks topped with broken glass and/or barbed wire used as barriers separating East and West Berlin. Those makeshift structures later became the Berlin Wall. Years later, Red and Wanda traveled through Europe visiting many of the same places he had seen on his initial trip.
Those who knew Red best remember his friendship and love for learning. He was something of a bookworm, reading several chapters a day in many as half-a-dozen books at a time. Red claimed to have read the Bible five times, declaring, “what I’m really doing is looking for some loopholes, but I can’t find any; we’ve all got to die: that’s one thing we’ve got to do.”
On October 24, 2005, Red did the “one thing we’ve all got to do” dying at the age of 91. He was buried next to Wanda at Carroll Memorial Garden in McKenzie.