Once upon a time in the NFL, when face masks were optional and penalties were few and far between, roamed a breed of football player like no other. One of those legendary figures was Cleveland Browns lineman and NFL Hall-of-Famer Gene Hickerson. The story of Gene Hickerson starts in Trenton, Tennessee but transitions to Trezevant in Carroll County. 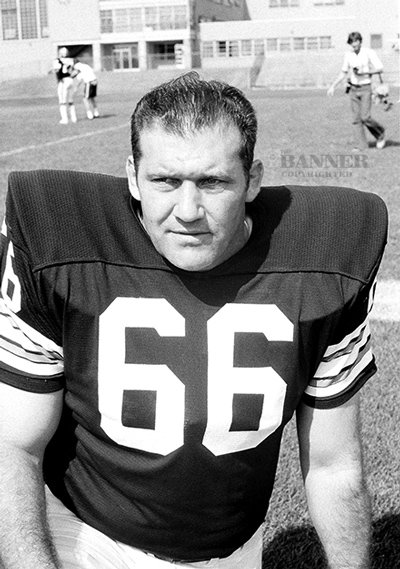 Robert Eugene Hickerson played football at Trezevant High School before enrolling at Ole Miss and going on to play for the Cleveland Browns. 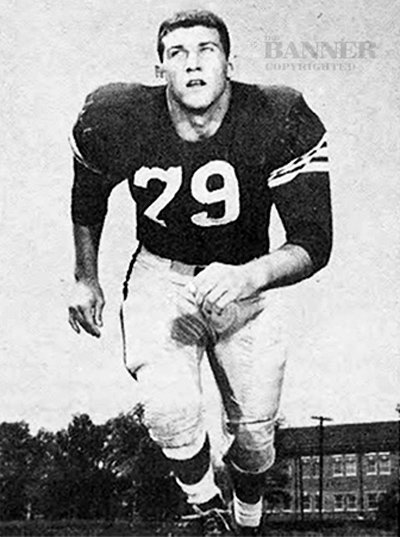 At the University Of Mississippi, Gene Hickerson switched from a running back to tackle. 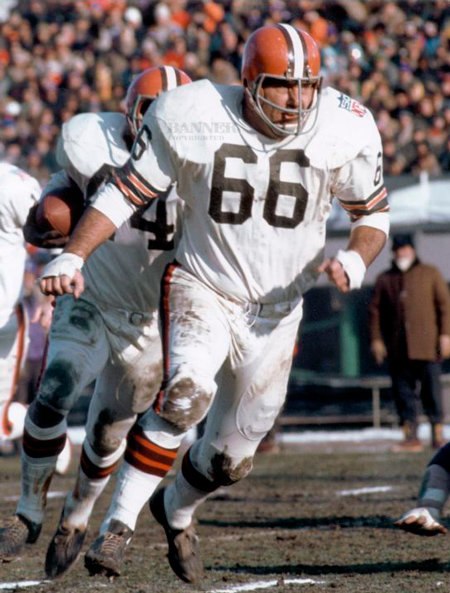 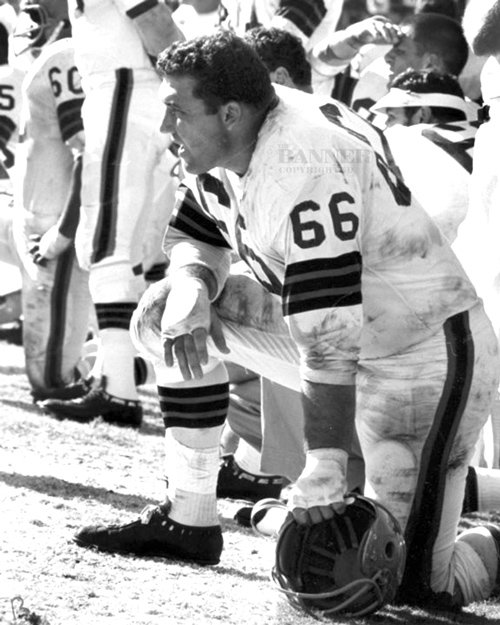 Gene Hickerson takes a knee on the sidelines against the Rams during a 1968 playoff game.
Courtesy National Football League 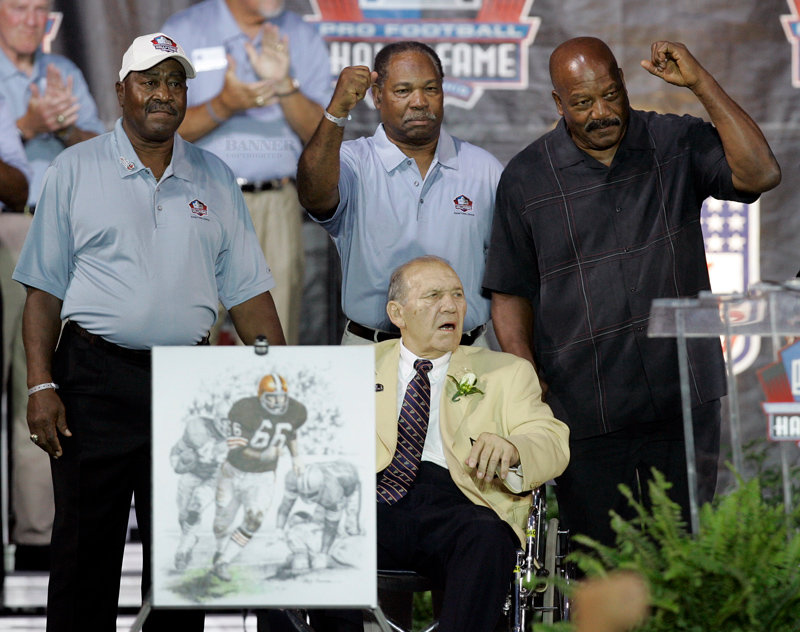 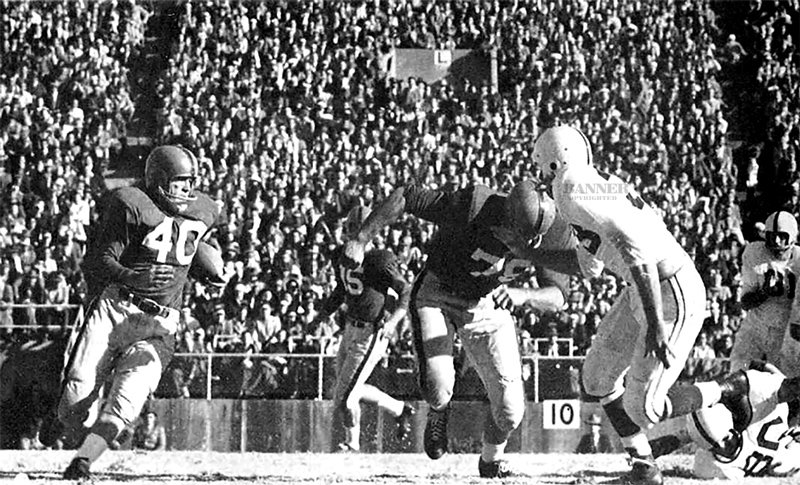 Gene Hickerson (79) prepares to throw a block for Paige Cothren (40) against Mississippi State.
Previous Next
Posted Tuesday, January 4, 2022 9:26 am
By Jason Martin
jmartin@mckenziebanner.com

Once upon a time in the NFL, when face masks were optional and penalties were few and far between, roamed a breed of football player like no other. One of those legendary figures was Cleveland Browns lineman and NFL Hall-of-Famer Gene Hickerson. The story of Gene Hickerson starts in Trenton, Tennessee but transitions to Trezevant in Carroll County.

Robert Eugene Hickerson was born near the family’s Gibson County farm on February 15, 1935. His father, Danielle Allen (1888–1972), was a farmer, and his mother, Mary Elizabeth Cotham (1893–1966), was a homemaker. The pair had fourteen children, nine boys and five girls.

Between 1945 and 1950, the Hickerson made their way to Carroll County, settling near Trezevant. The move allowed Gene to begin playing football at Trezevant High School. It wasn’t until his senior year that Gene was talked into playing football by his brother.

As a 226 pound fullback, Hickerson made a name for himself on the field with his speed and agility. He was not highly recruited, but Ole Miss coach John Vaught got wind of the young man’s size and speed. In March 1955, Hickerson decided he wanted to be an Ole Miss Rebel.

“They started me with the fullbacks, but I got tired of running all of those sprints in that sweltering August Mississippi heat. So I asked to change positions. I said, ‘I want a position where I don’t have to run as much.’ They said, ‘What do you have in mind?’ I said, ‘Make me an offensive guard or a defensive end. Let me play somewhere that I don’t have to run in all this Lord-awful heat.’ That is how I became a guard”.

After redshirting as a freshman, Hickerson played football at Ole Miss from 1955 to 1957. By the 1956 season, Hickerson was a starting lineman and the following year, he was named co-captain. In 1957, the Ole Miss had a 9-1-1 record with a #7 ranking by the Associated Press. The Rebels finished the season with a 39-7 victory over Texas in the Sugar Bowl.

Hickerson was named All-American, All-SEC, and All-South, as a tackle. He finished his collegiate career by playing in the 1958 Senior Bowl and the 1958 College All-Star Game. In the 1957 NFL draft, Hickerson, a junior, was selected in the seventh round by the Cleveland Browns; the Browns’ first-round selection was Jim Brown.

According to Bobby Franklin, Hickerson’s former college and NFL teammate, said Hickerson “was such a great athlete that the Browns drafted him his junior year. I don’t think they drafted a year early unless it was someone real special. They thought he was real special. Everybody knew how strong Gene was, had great feet, tremendous speed.”

He joined the Browns in 1958 negotiating his first contract with a salary of $10,000. Hickerson was moved from tackle to right guard/pulling guard.

In his rookie season, he played four games. In 1959, he was started over Chuck Noll (future NFL Hall-of-Fame Pittsburgh coach). Hickerson suffered a broken leg in the 1961 pre-season opener. He fractured the leg again later in the year when he was hit on the sideline.

By 1962, he was back playing and guard. In 1963, he started all fourteen games. The following season, the Browns won the NFL Championship and Hickerson was named All-Pro/second team by the Newspaper Enterprise Association.

By the time Hickerson retired following the 1973 season, at the age of 38, his accomplishments on the football field were unquestioned. During his tenure, the Browns never experienced a losing season. According to the Tennessee Athletic Hall-of-Fame, “Prior to Hickerson joining the Browns, there had been just seven runners in the entire history of the NFL to reach 1,000 yards rushing in a season. With Hickerson paving the way, the Browns featured a 1,000-yard rusher in nine of Hickerson’s first 10 pro seasons.”

Much of the accolades Hickerson deserved for his career went unnoticed following his retirement. Later in life, his name began to repair as the history of the NFL was being chronicled. Hickerson’s contribution to the running game led to him being recognized as part of the NFL’s All-Decade Team of the 1960s.

In 2007, he received the ultimate recognition as he was enshrined in the NFL Hall-of-Fame in Canton, Ohio. Hickerson was pushed in a wheelchair across the stage by three running backs, for whom he helped pave the way into the Hall-of-Fame: Jim Brown, Leroy Kelly and Bobby Mitchell. Kelly, once asked by a reporter what he learned from years of playing behind Brown, answered: “I learned to follow Gene Hickerson’s big butt any chance I got.”

That night Hickerson stared blankly as his friend, Bobby Ray Franklin, presented him for enshrinement. At the time, Hickerson was suffering from the later stage of Alzheimer’s. His son, Bob Hickerson, accepted for him on his behalf.

On October 20, 2008, Gene Hickerson died. He was laid to rest at Elmhurst Park Cemetery in Avon, Ohio.