During World War II, Gordon Browning initially served as deputy head of the Belgium-Luxembourg mission, which aimed to restore civilian government to these areas and aided in the Allied victory at the Battle of the Bulge in early 1945. 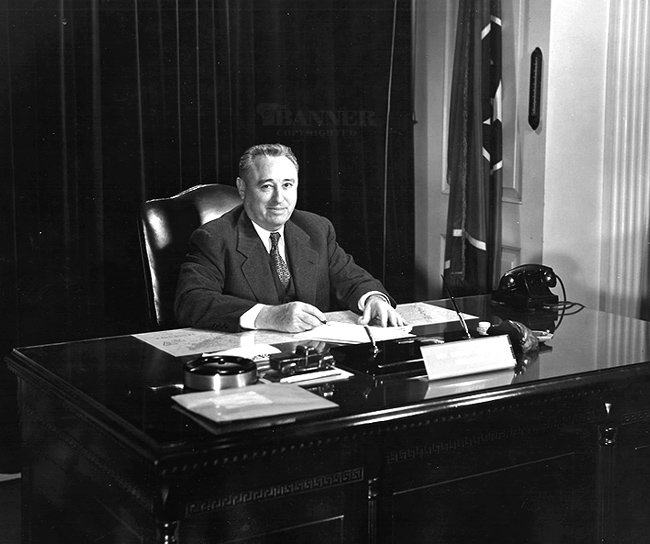 Upon his return stateside, Gordon Browning began campaigning for the 1948 Democratic Party nomination for Governor of Tennessee. 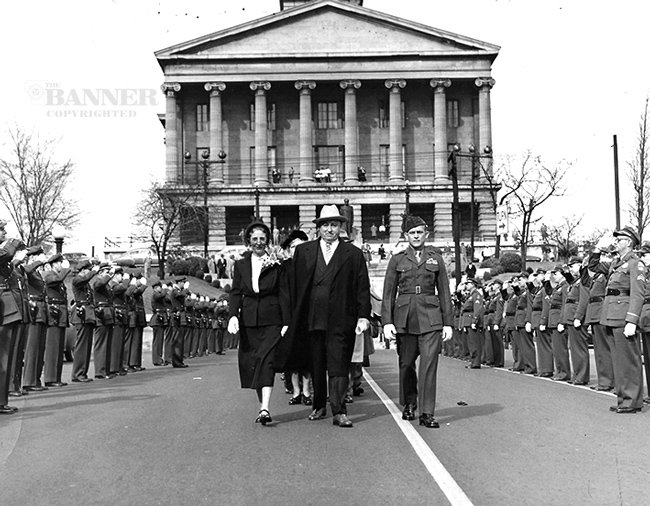 Ida and Gordon Browning took part in his inauguration parade in front of the Capitol in Nashville. 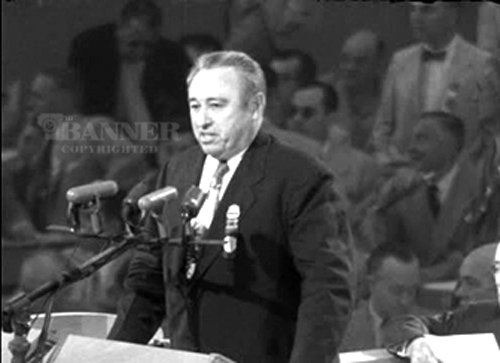 Gordon Browning delivered the nomination of Tennessee Senator Estes Kefauver for President of the United States during the 1954 Democratic National Convention. 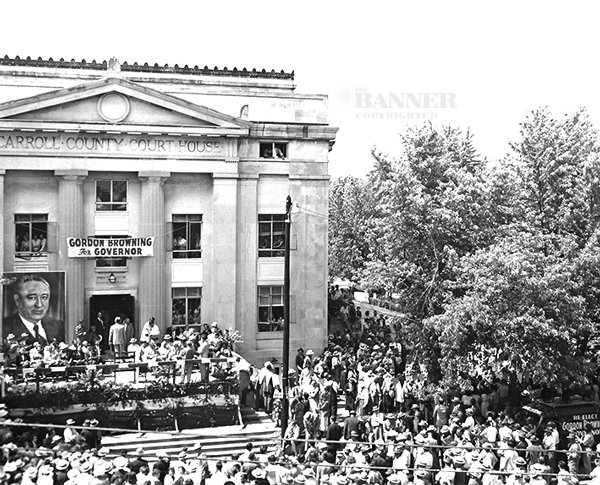 The courthouse in Huntingdon was a campaign rally point during a Browning gubernatorial campaign. 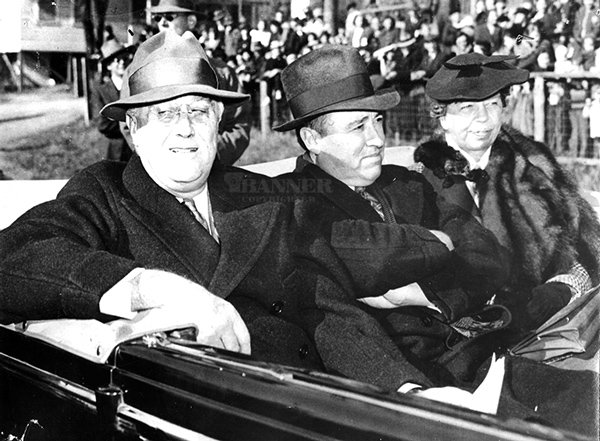 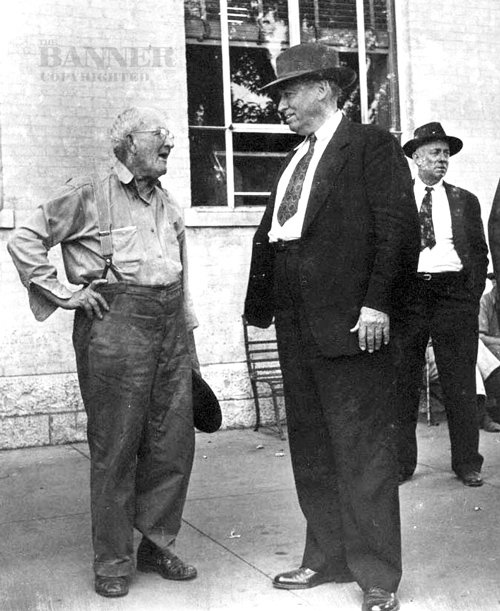 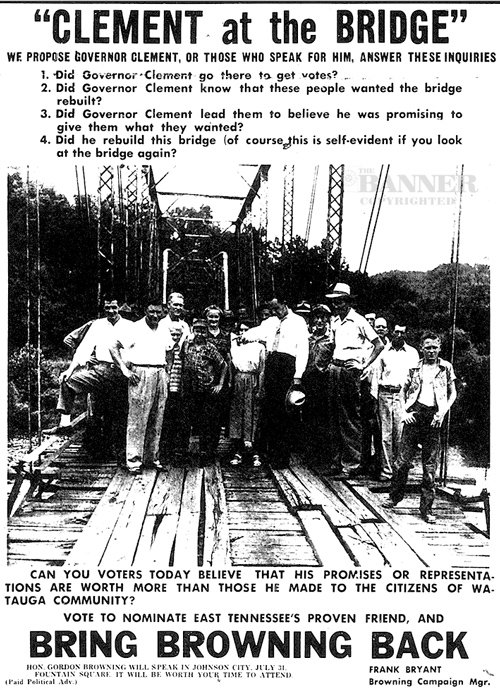 In 1952, Gordon Browning’s campaign had an ad in the Press-Chronicle criticizing Governor Frank Clement for the state of a bridge into the town of Watauga.
Previous Next
Posted Tuesday, December 7, 2021 10:10 am
By Jason Martin
jmartin@mckenziebanner.com

During World War II, Gordon Browning initially served as deputy head of the Belgium-Luxembourg mission, which aimed to restore civilian government to these areas and aided in the Allied victory at the Battle of the Bulge in early 1945.

In September 1946, Browning was appointed commander of the military government in the Bremen enclave as part of the Allied Occupation of Germany. Serving in the position for more than a year after Germany’s surrender. For his wartime service as a military government officer, most of which was under the direction of General Dwight Eisenhower, Browning was decorated by five governments. He received the Legion of Merit from the United States, the Order of the British Empire from Great Britain, the Order of Leopold from Belgium, the Order of Orange Nassau from Holland and the Order of the Adolf Nassau from Luxembourg.

In a letter to his wife, Browning wrote about serving a commander in Breman with all the luxury provided for him as Military Governor of 8 million Germans; two residences, three cars with chauffeur and many other luxuries; all of which he said he turned back except for what he needed. He told her of the beauty of the place, the lily pond with goldfish, etc. Ida responded, “You better enjoy all that luxury, it won’t be that way when you get home.”

While his name was put on the 1946 ballot for Tennessee Governor, he refused the nomination and did not campaign. Two years later, he did announce his candidacy for governor. On August 5, 1948, Browning defeated incumbent Governor Jim Nance McCord for the nomination, 231,852 to 158,854. It was the first defeat of a Crump-backed candidate in a major state election in over two decades.

In the general election, Browning faced country music singer Roy Acuff. Republicans had added Acuff’s name to their primary ballot as a publicity stunt to draw attention to the party. Browning nevertheless won easily, 363,903 to 179,957.

Along with election reforms, Browning also increased funding for rural schools and higher education, established a retirement system and minimum salaries for teachers and expanded the state’s system of paved roads from roughly 10,000 miles to over 20,000 miles. He established the State Library and Archives, the Cordell Hull Building, the House Office Building, a new School for the Blind and sponsored a million-dollar improvement for the School for the Deaf in Knoxville.

In the 1950 governor’s race, Browning beat back a primary challenge by Nashville attorney and state senator Clifford Allen, winning the nomination 267,855 to 208,634. For the first time after the Civil War, no Republican ran in the general election. Browning’s only opponent was eccentric attorney John R. Neal, who was running as a third-party candidate. Browning defeated Neal, 184,437 to 51,757.

In 1952, Frank G. Clement challenged Browning for the party’s nomination for governor. Clement derided Browning as “dishonest, indecent, and immoral,” and criticized the state’s purchase of an expensive office building in Nashville. Governor Browning responded by calling Clement a “demagogue” and “pipsqueak.” Clement had the support of political boss E. H. Crump and Nashville Banner publisher James Stahlman. Browning, nearly twice Clement’s age, struggled to adapt to the new medium of television. Browning lost the primary, 302,487 to 245,156.

Following his defeat in 1952, Browning returned to Huntingdon to practice law. He again challenged Clement for the party’s nomination for governor in 1954. Browning was easily defeated. He remained active in the Democratic Party, however, traveling frequently to attend party functions. He died on May 23, 1976, and was buried in Huntingdon’s Oak Hill Cemetery.