Those that know me, know I have a love for older music, preferably classic country and rock from the 60s and 70s. Probably much to wife’s announce, I know and can sing along to almost every song that comes on the radio or iPod (when I’m the vehicle DJ). The Story family has a history and love for music, going back at least five generations. Naturally, I married one of the best singers from McKenzie. 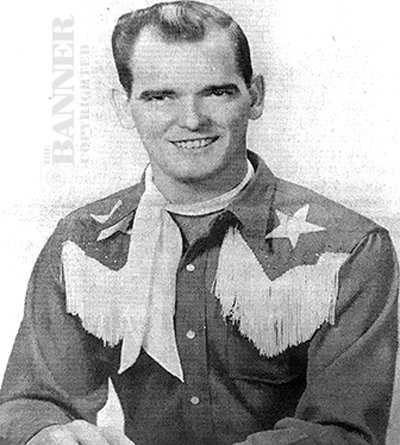 After his discharge from the Army, Edd Cisco performed as Eddy Star in Chicago. 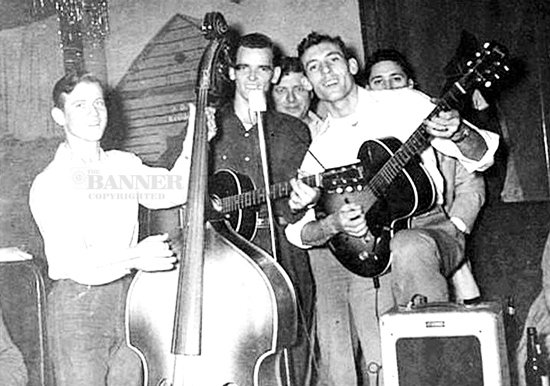 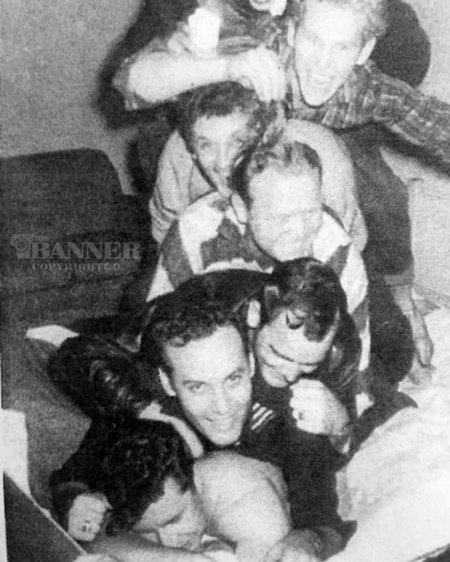 Levon Helm on top, followed by Ronnie Hawkins, an unidentified man, Ed Cisco, Carl Perkins, and W.S. Holland who was a drummer with Perkins and later played in Johnny Cash’s band.
Previous Next
Posted Tuesday, October 26, 2021 9:29 am

Those that know me, know I have a love for older music, preferably classic country and rock from the 60s and 70s. Probably much to wife’s announce, I know and can sing along to almost every song that comes on the radio or iPod (when I’m the vehicle DJ). The Story family has a history and love for music, going back at least five generations. Naturally, I married one of the best singers from McKenzie.

Going through the archives a few months back, I came across a feature on Edd Cisco who later in life called Westport home. He was friends and band-mate to Carl Perkins; pretty sure I don’t have to write an introduction for Perkins. Cisco was a talented musician, recording artist and later popular disc jokey in McKenzie and Jackson area. So this week, I want to share the story of Edd Cisco.

It starts on April 15, 1930, in Toone, Tennessee in Hardeman County. Born Thomas Edward Cisco, like most families during the depression era moving was commonplace. The Ciscos moved from Toone to Bemis and later to Malesus, Tennessee just south of Jackson.

The move to Malesus was a game-changer for young Edd, he met a young girl named Jean Bridges. She taught him a few chords on the guitar. A few years down the road Jean and Edd would marry.

Living near Jackson, put Cisco in contact with the Perkins family, brothers Jay and Carl. Cisco and the Perkins brothers attend edMalesus school along with Albert Hall. It wasn’t long before Carl, Hall and Edd formed a three-man band. They gained attention as they were picked to perform regularly on WJTS in Jackson.

According to a 2001 interview, Edd and Carl “spent much of their waking hours together.” Edd began working for Colonial Bakery when he was 17 and got Carl hired on even though he was considered too young. Over the next three years, the boys continued working for the bakery and playing local events.

The boys were making a name for themselves on the local honky-tonk circuit. They had a different sound than the regular country acts, “When we’d go into a honky-tonk singing those slow songs, we’d trying goosing it up a little so people could dance a little faster and we just worked into it.” Thus began the evaluation into what became known as rockabilly.

This came to a halt when in 1952, Edd was drafted into the Army. With Edd out of the picture, Carl and his brothers, Jay and Clayton, restructured the band. They soon had their sound with the inclusion of a drummer, W.S. Holland.

Edd explained the development of rockabilly by saying, “Rockabilly music came out of blues, country, blacks and gospel.” Southern music sound was a mixture of several varieties of music, rockabilly was about releasing the raw emotion and excitement that was inherent in each style, from the juke joint singers, southern gospel and the deep soulful spirituals, to the try jerkers of country music. This thread of the southern sound was shared among the boys growing up in the south and building onto the rockabilly sound.

Edd stated a good deal of Elvis Presley’s early music and styling came out of Jackson. The story goes that Elvis and Scotty Moore watched Carl Perkins and his band quite a few times. Soon Elvis was using a few of Carl’s licks.

After Elvis signed with Sun Records, owner/producer Sam Phillips was eager to find more acts with a similar sound. Thus Carl and his band ended up in Memphis and signed with Phillips.

In 1955, Edd received his discharge from the Army and was looking to form another band. He was working the local honky-tonk scene when he learned of better-paying gigs in Chicago. There he met Hank Snow, who persuaded him to change his name to Eddy Star. While he was doing okay for himself, Carl was doing even better with his release of “Blue Suede Shoes.”

On March 21, 1956, Carl and his band were headed to New York to perform on the Perry Como Show. Shortly before sunrise on March 22, near Dover, Delaware their vehicle hit the back of a pickup truck and went into a ditch. Carl sustained three fractured vertebrae in his neck, a severe concussion and a broken collar bone. Jay had a fractured neck and severe internal injuries (he later died from a brain tumor in 1958). The driver of the pickup truck, Thomas Phillips, a 40-year-old farmer, died when he was thrown into the steering wheel.

With Jay unable to perform, Edd was invited to join Carl and Holland on the road. Recording for Sun Records allowed the band to tour regularly with Johnny Cash and the Tennessee Three.

“We traveled together all the time - along with nearly everybody else in the business” remembered Edd. “They’d do our show or we’d be on theirs.” The touring schedule led them to perform with legends like George Jones, Marty Robbins, Porter Wagoner, Hank Snow and Ernest Tubb.

One of the most memorable Johnny Cash albums “Johnny Cash at San Quentin” Edd along with Carl Perkins can be heard playing during Cash’s set.

The strain on life on the road influenced Edd to consider a new career especially, after his third child. Edd and Jean moved to Huntingdon looking for a simpler life. He began selling insurance and working for WHDM in McKenzie.

“After I went to work at the radio station, we did all kinds of work with charities,” he recalled. They helped raise funds to fight cancer, heart disease and help “God’s special children.”

He later transitioned to FM and started working in Jackson, a job he held for 20 years.

In 1987, he had the first of five different heart operations. In a freak occurrence, nerves that controlled the vocal cords were clipped when an eight-inch portion of his aorta was removed, paralyzing his voice and ending his career.

With a weakened speaking voice, radio was no longer an option. Edd decided to try his hand at running a concessions business. With the help of his daughter Bev, he was able to find a new path. He traveled around in a blue van decked out with fliers recalling his days as Eddy Star and the years he routed across the country with Carl Perkins.

Edd died on September 20, 2001, at the age of 71. He and Jean are buried at Barr Springs Cemetery in Westport.