West Carroll School Board members tried something new at their monthly session Thursday, November 4. In an effort to go paperless, board members along with the school director were provided access to Chromebooks which had their agenda and other information needed to conduct their meeting. The paperless project is being spearheaded by Brittany Foster who gave instructions for accessing their materials at the start of the meeting. 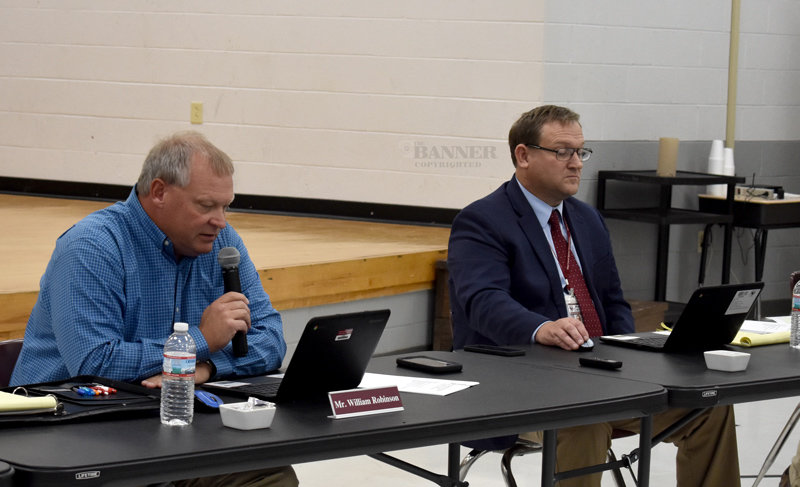 West Carroll School Board members tried something new at their monthly session Thursday, November 4. In an effort to go paperless, board members along with the school director were provided access to Chromebooks which had their agenda and other information needed to conduct their meeting. The paperless project is being spearheaded by Brittany Foster who gave instructions for accessing their materials at the start of the meeting.

School Director Preston Caldwell updated board members on the current COVID-19 situation in the schools system. As of Nov. 4, there were three positive COVID cases with 20 others quarantined. He recommended staying at Phase 3 guidelines which deal with minimal viral spread. Visitors will be allowed more access in school facilities, in-school assemblies will be allowed, and kids can eat in the cafeterias with assigned seats and distancing.

School Board Attorney Chris Hayden gave everyone an update on COVID legislation recently passed by the State and a new Federal order regarding COVID as well. The two apparently contradict each other with the state passing legislation that schools and businesses could no longer enforce vaccination and masking mandates. The new legislation also states that local health officials will no longer control quarantining rules but will be done at the state level. Governor Bill Lee has yet to sign it into law.

On the other hand, President Joe Biden has released orders for OSHA (Occupational Safety and Health Administration) to enforce vaccination mandates for businesses and other employers that have 100 employees or more. These orders include stiff fines for non-compliance. Barring any legal challenges, which are expected, the federal order goes into effect on January 5, 2022.

Hayden also informed the board that the state passed legislation that would allow county caucuses for either political party to nominate a candidate to run for school board office starting with the next elections. There was considerable opposition from school officials including local school boards, Tennessee School Board Association, and the State Board of Education, but it passed along with the new COVID legislation during a late-night session last weekend.

Board Chairman William Robinson commented, after Hayden’s updates, “It needs to be communicated that this is not a board decision but a state and federal issue.” Other board members and Director Caldwell agreed with the assessment.

School Director Preston Caldwell discussed the five-year Strategic Plan for the West Carroll School System which was passed last year by the board. He reiterated that the main topic is about climate and culture. He touched on three goals set in the plan. Goal I is to focus on each and every student and do their very best to teach the whole student. Goal II included recruiting and evaluating teachers and staff. For example, the board approved a four percent raise for staff and included a $500 Christmas bonus for each staff member. Goal III involves student relationships with each other as well as teachers and staff members. Caldwell used the recent Trunk or Treat as an example saying it was “by far the most turnout of any school-related event he had attended so far.” No action was taken on the strategic plan.

Caldwell informed the board that the state has legislation ongoing that will change the BEP school funding formula. He advised that it will be a completely new formula based on student counts with multipliers added for such things as kids with disabilities, low-income kids, etc. Caldwell stated that, if approved, it will not affect West Carroll until the 2023-24 school year.

There was action taken on two items during the meeting, board members approved a lone bid from a Memphis distributor on a dishwasher for the High School cafeteria. The bid was $56,639. Board members also approved the first reading of a school board policy change regarding appeals to or appearances before the board.

The board adjourned with the next meeting set for December 7.