Sass Honored by City of McKenzie 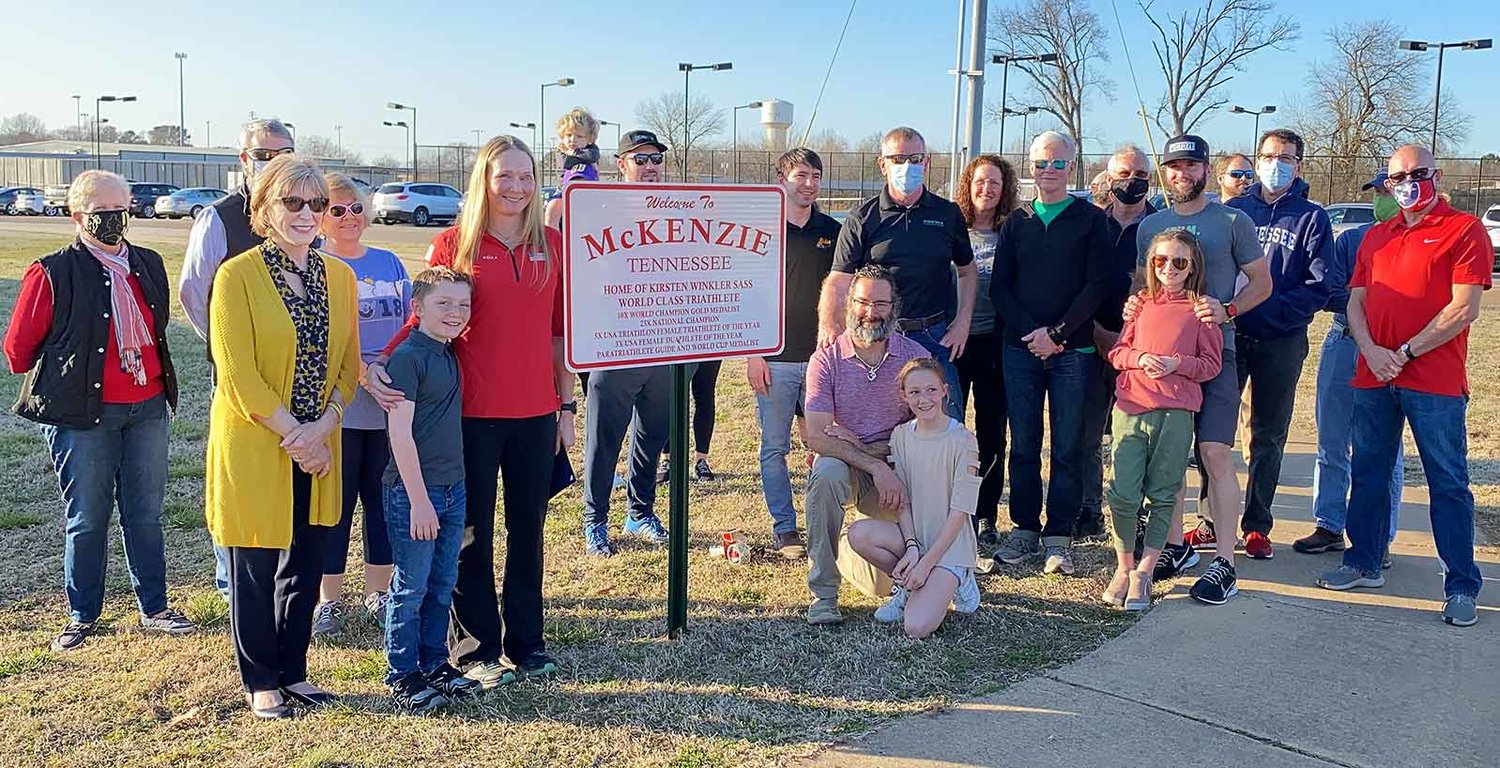 The unveiling of a sign to honor Kirsten Sass was on March 4, 2021 at the intersection of University Drive and Patriot Drive. Mayor Jill Holland read a proclamation detailing a few of Sass’s athletic accomplishments during the ceremony.
Posted Tuesday, January 11, 2022 5:30 pm

Sass Honored by City of McKenzie
McKENZIE (March 4) — McKenzie native and champion triathlete Kirsten Winkler Sass was honored by the City of McKenzie on Thursday, March 4 for her international athletic accomplishments. Mayor Jill Holland and the McKenzie City Council approved the placement of three signs throughout McKenzie noting Sass’s accomplishments. March 4, 2021 was designated as Kirsten Winkler Sass Day in McKenzie.
During a brief ceremony at the intersection of University Drive and Patriot Drive. Family members, fellow athletes, and friends gathered for the ceremony.

Dexter Williams Resigns From West Carroll
ATWOOD (March 9) — Dexter Williams, director of schools, submitted his letter of resignation to the West Carroll Special School District Board of Education during the March 9 meeting.
Williams, who served as director 2017-2021, and principal at West Carroll Junior High and High School in 2015-2017, has accepted the position of athletic director and high school men’s basketball coach at Trinity, a private Christian school in Jackson.

West Carroll Returns to Murfreesboro
ATWOOD (March 12) — West Carroll War Eagles punched their ticket to Murfreesboro with an impressive win over Jo Byrns in the sectional contest on Monday, March 8 in Atwood. Dexter Williams, director of schools at West Carroll was just feet away when that final buzzer sounded. He was elated to know the War Eagles were returning to the state competition for the first time since 1996.

Carroll Reaches 21.32 Percent Vaccination Level
NASHVILLE (March 12) — Carroll and Henry counties are among the top counties with the highest percentage of its citizens who have received at least one vaccine against the coronvirus.

McClerking is HHS Principal
HUNTINGDON (March 18) — Porsche McClerking is the new principal at Huntingdon High School effective July 1. He was selected by HHS Principal Dr. Jonathan Kee, who was appointed to serve as the new director of schools beginning July 1.

American Rescue Plan Provides Millions To Local Schools, Governments
WASHINGTON — The recently passed American Rescue Plan will provide millions of dollars to local schools and county and municipal governments. The Act, proposed by President Joe Biden and passed with Democrat-only votes in the U.S. House and Senate, will flood local governmental entities with huge amounts of funds, that are restricted in use.

Huffman Appointed President Of TCAT-McKenzie, Paris
MARCH 25 — The Tennessee Board of Regents today appointed Willie Huffman as the next president of the Tennessee Colleges of Applied Technology at Paris and McKenzie.

Granges to Invest $33 Million to Increase Capacity
Gränges will invest $33 million to expand its aluminum casting operations in Huntingdon, Tennessee, to meet the growing demand from North American customers. This investment follows the previous and successful investments in new rolling capacity at the sites in Huntingdon and Newport, Arkansas.

McKenzie City Florist Honored With Rising Star Award
McKENZIE (March 25) — In 2018, David and Michele Jarrett put their entrepreneurial spirit in high gear as they opened McKenzie City Florist & More. Fast forward four years, the Jarretts are celebrating their successful endeavors and were recently presented the Rising Star Award from the Regional Tennessee Small Business Development Center. The Jarretts were joined by family members, city officials as Landy Fuqua, director of the TSBDC at the UT Martin REED Center, made the presentation.

Jan Latimer Named Vice President of TCAT-McKenzie
McKenzie resident Jan Humphreys Latimer, is returning to the Tennessee College of Applied Technology-McKenzie to assume the role of vice-president, vacated when John Penn Ridgeway was elected as mayor of Henry County.
Latimer has worked in technical education for more than 20 years serving on both the Paris and McKenzie TCAT campuses. She began her career in 2000 when she was hired as a counselor/recruiter at the Tennessee Technology Center-McKenzie. She was promoted to Student Services Coordinator and moved to the Paris campus in 2007.

McKenzie to Consider Abolishing Wards
McKENZIE (April 8) — Following the regular monthly meeting of the City of McKenzie Board of Mayor and Council during an after-meeting workshop Mayor Jill Holland and the Council briefly discussed the possibility of abolishing the current six ward system used in the municipality elections. McKenzie is the only municipality in Carroll County using the antiquated ward system.

Major General Tommy Baker Named Commissioner of Veterans Services
NASHVILLE — Today, Tennessee Governor Bill Lee announced Major General Tommy H. Baker will serve in his cabinet as commissioner for the Department of Veterans Services, effective immediately.
“Gen. Baker is a proven public servant who has dedicated his career to protecting our state and nation,” said Gov. Lee. “I’m confident he’ll lead the department with integrity and look forward to his continued service.”
Baker formerly served as interim commissioner for the department. He remains the Deputy Adjutant General of the Tennessee National Guard, responsible for the training and supervision of over 13,000 Soldiers and Airmen.

Legislative Body Votes 18-2 to Limit Funding to 1000-Acre Lake
HUNTINGDON — Carroll County commissioners voted 18 to 2 on a resolution to limit the amount of ‘growth’ funds it grants to the Carroll County Watershed Authority. The vote came after a failed procedural move by Commissioner Barry Mac Murphy, who entered a motion to table the action. That move failed 17 to 3.
The Watershed Authority is the independent government entity that owns and operates the Carroll County 1000-Acre Recreation Lake, located in the Leach Community, just outside of Huntingdon.