FOLEY, Ala. — The USA Archery Collegiate 3D Nationals were held at the Graham Creek Interpretive Center in Foley, Alabama this weekend. 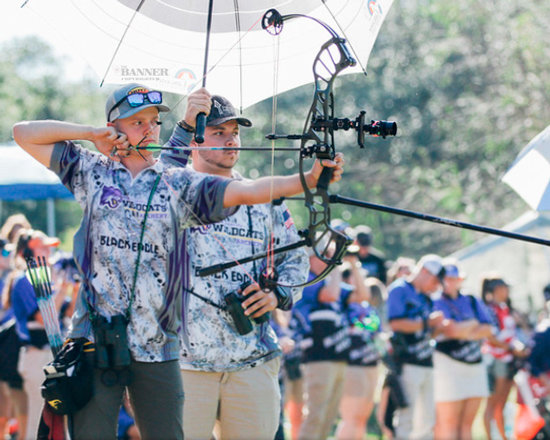 Ace Coleman takes aim with his compound bow.
Posted Tuesday, October 25, 2022 5:00 pm
FOLEY, Ala. — The USA Archery Collegiate 3D Nationals were held at the Graham Creek Interpretive Center in Foley, Alabama this weekend.
Bethel’s Hasadiah “Ace” Coleman came away with a national title in the men’s compound. Coleman totaled a score of 492 to win by six points in his division.  Coleman is employed at McKenzie Banking Company.
Aden Koelling (Jefferson City, Missouri) (freshman) took 4th place in Men’s Barebow division, finishing with the highest single round score of the week for the division. (199/200)
Megan Holland and Coleman took a top ten (7th) place in the nation for open compound mixed teams.
Aden Koelling and Alivia Gream took a top ten (9th) place for barebow mixed teams.
Megan Holland placed 1st with her team in the team mixer round.
Andrew Ether placed 2nd with his team in the team mixer round.
The team finished respectfully across the board.
Coach Hunter Louden commented, “We were pleased with our effort. A big congrats to Ace on the national title. We are enormously proud of him. We were able to compete in the team mixed equipment shoot at the banquet for the first time.”
For complete details on Bethel and the event results visit: https://www.usarchery.org/events/results