JACKSON (November 8) — Union University’s 2022 Homecoming celebration included the recognition of 19 alumni and friends of the university for outstanding achievements in their respective fields and the presentation of Union’s Homecoming Court, among other activities. 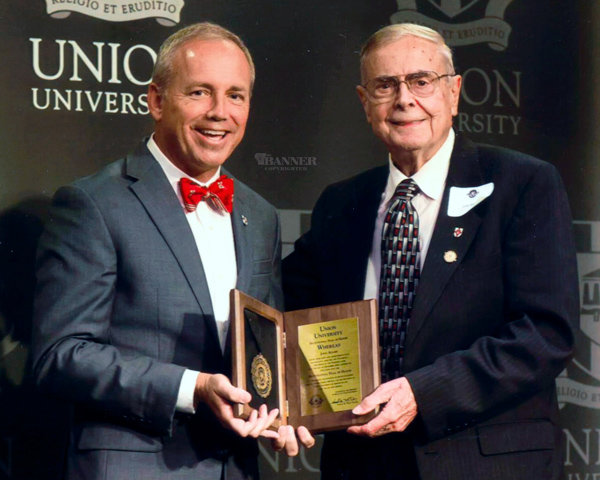 Union President Samuel W. “Dub” Oliver (left) presents Union’s New Bicentennial Hall of Honor Award to Dr. John Adams, one of 100 recipients. Later, Adams also received the Alumnus of the Year Award from President Oliver.
Posted Tuesday, November 22, 2022 5:00 pm
JACKSON (November 8) — Union University’s 2022 Homecoming celebration included the recognition of 19 alumni and friends of the university for outstanding achievements in their respective fields and the presentation of Union’s Homecoming Court, among other activities.
The Meritorious Service Awards banquet was held Nov. 4 in the Carl Grant Events Center.
“Union has such a rich history of producing alumni who serve their communities well, and who make a difference in the lives of others for the kingdom of God,” said Catherine Kwasigroh, Union’s vice president for institutional advancement. “We’re so thankful for this year’s award winners, and we’re honored to be able to recognize them for their accomplishments.”
John Adams, Union University Class of 1963, was honored as the university’s Alumnus of the Year. Adams and wife, Robbie, recently moved back to McKenzie.
This award is presented to a Union graduate for distinction in his or her profession, service to mankind and/or contribution to Union University. Adams served as Union’s vice president for religious affairs and professor of practical Christian ministries at Union from 1982-1999. He served as a professor of homletics, pastoral ministries, and evangelism. He has also served several churches as pastor and interim pastor. He was the pastor of First Baptist Church, McKenzie prior to joining the staff of Union.
Earlier this year, Adams was also inducted into Union’s new Bicentennial Hall of Honor.
The university was founded in 1823 and has celebrated 200 years of transformational, Christ-centered education. Events for the 200th year are planned to give glory and honor to God for His blessings on the institution. As part of the celebration, Union established the Bicentennial Hall of Honor designed to recognize and honor those who have contributed in a significant way to the vision and mission of the university.
One hundred individuals were selected to enter to the Bicentennial Hall of Honor.
“With a long and storied history, Union University has been the beneficiary of a number of individuals who have served faithfully and made a significant impact upon the institution. We wanted to recognize some of the most significant people who have helped make Union this excellent, Christ-centered school it is today. We are so grateful for all these individuals and the ways that God has used them to make a difference in the life of Union University,” said President Samuel ‘Dub’ Oliver.
Adams received the Bicentennial Hall of Honor award on September 23, 2022.
John and Robbie have deep roots in Carroll County. Adams served as pastor of  McLemoresville Baptist Church - while a student at Union. Kim, their oldest daughter, was born while the family lived there. Later, Adams served seven years as the pastor of FBC-McKenzie. While serving at Union, Adams served as interim pastor at First Baptist Church-Huntingdon for one year.
Besides Union, the family has deep ties with Bethel University.
Kim Adams Creasy, is a graduate of Bethel University, and her husband, Mike Creasy, reside in McKenzie. Mike is an attorney with the West Tennessee Legal Services. The Adams’ eldest granddaughter, Dr. Ashley (Creasy) Johnson, is a professor of nursing at Bethel University. Ashley’s husband, Arron, a Bethel graduate, is an assistant coach of the Bethel Wildcats men’s basketball team.
Courtney (Creasy) Kee, a graduate of Bethel, and the second granddaughter of the Adams, is the school psychologist for the Henry County School System. Courtney’s husband, Benji, is an engineer with H & M Construction Company of Jackson. The Adams have seven great-grandchildren.
Tracey, the Adams’ youngest daughter, is a graduate of Union University’s nursing program and her husband, Bob Thompson, is quality control manager at US Farathane, Jackson.
Adams said, “This s a great honor and I give glory to Christ Jesus who saved me at the age of 13. Union is a great university whose administration, faculty and staff are rigorously and consistently committed to providing a transformational, Christ-centered education.”