McKENZIE (September 24) — After a week off with an open date, the No. 13 Bethel Wildcats returned to action Saturday at Wildcat Stadium hosting the UPIKE Bears. 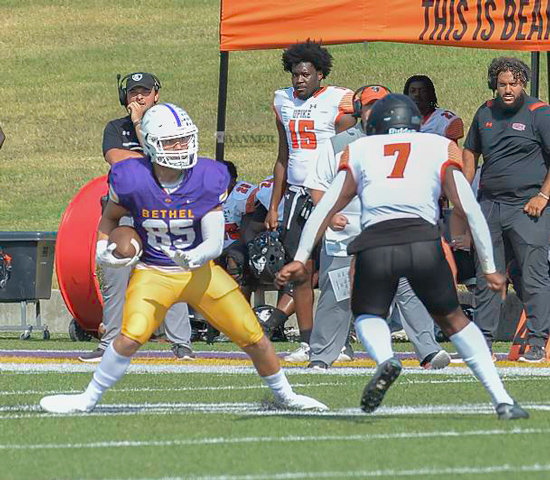 Jacob Bowles, 85, finds running room for the Wildcats.
Photo courtesy of Gary Owens
Posted Tuesday, September 27, 2022 1:45 pm
McKENZIE (September 24) — After a week off with an open date, the No. 13 Bethel Wildcats returned to action Saturday at Wildcat Stadium hosting the UPIKE Bears.
The Wildcats used 373 yards passing and 159 on the ground to win 45-16. The Wildcat defense did their job as well holding the high-scoring Bears to a season low sixteen points. Pikeville arrived in McKenzie averaging 50.5 points per game.
Bethel moved to 4-0 overall and 1-0 in the MSC. The Bears suffered their first loss dropping to 2-1 and 1-1.
The Wildcats led 10-3 at the end of the first quarter and 17-3 at the half. Bethel outscored the Bears 21-7 in the third stanza and cruised to the win.
Bethel’s Joaquin Collazo erased a 3-0 deficit with a 64-yard first quarter touchdown pass to Davius Prather. The point after by Austin Abbott gave the Cats a 7-3 lead. With under a minute left in the first quarter Abbott drilled a 35-yard field goal and Bethel led 10-3.
Collazo and Quashawn Ford teamed up for a 21-yard scoring pass in the second quarter to give Bethel the 14-point cushion at the break.
Collazo hit J D Dixon on a 38-yard touchdown pass to give the Cats a 24-3 lead in the third quarter. Calen Warren added to the lead with a 50-yard interception return. Abbott’s point after gave Bethel a 31-3 margin. Collazo and Prather struck again from forty-two yards out and Bethel led 38-3. After a UPIKE score, Taylor Yancey scrambled in from two yards out and the Cats went on to win 45-16.
Collazo was 26-of-34 for 373 yards. Terrance Roberts led Bethel in rushing with 73 yards. Dixon caught nine passes for 159 yards. Prather finished with four receptions for 124 yards.
Vonte Bates led the Wildcats with six total tackles, three pass breakups and an interception. Jaylon Sanders had four total tackles and two sacks. Brandon Moore had an interception.
Bethel had 13 penalties for 128 yards. The Bears were penalized five times for 62 yards.
Coach Mike Jasper was pleased with the win. “I am so proud of the way these guys play the game. These young men played with such an edge and were gritty the entire time. My coaches coached their tails off until the final buzzer. I’m just blessed by the way we are preparing, and the way we came out after the half. We have to find a way to start faster as an entire program, but other than that these young men bring it every week. I have to do a better job being sure we are disciplined and close the game out in a better fashion, but that is on me. I’m excited for our program and excited to get back to work for our next game, but we will enjoy this one for a short while.”
Next Week: The Wildcats travel to Georgetown next Saturday. Kick-off is slated for 12:30 CST.
Live Stats: https://bethelathletics.com/sports/fball/2022-23/boxscores/20221001_z6wl.xml
Live Video: https://www.youtube.com/channel/UC62MWilK_2_nOeIvuJ5pNPg