McKENZIE  — The No. 6 Bethel Wildcat defense dominated the visiting Thomas More Saints Saturday in front of a huge crowd on Homecoming at Wildcat Stadium. The Cat offense also did their part scoring in every quarter in the 57-7 victory. 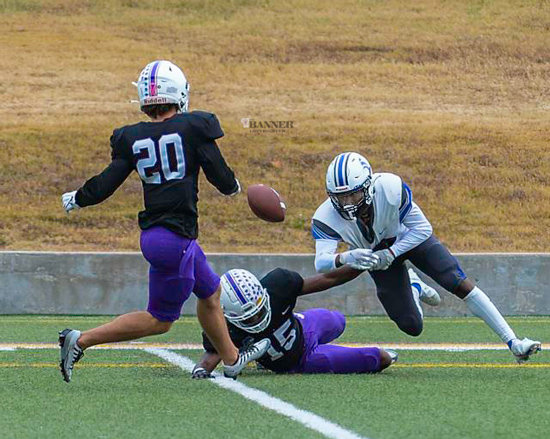 Posted Tuesday, October 25, 2022 1:31 pm
Courtesy of Bethel SID
McKENZIE  — The No. 6 Bethel Wildcat defense dominated the visiting Thomas More Saints Saturday in front of a huge crowd on Homecoming at Wildcat Stadium. The Cat offense also did their part scoring in every quarter in the 57-7 victory.
Bethel remains unbeaten at 8-0 overall and 5-0 in the MSC. The Saints fell to 4-4 and 3-2.
Bethel outgained TMU 486-159 in total yards. Bethel had 399 yards in passing and 87 yards in rushing. The Cat defense limited the Saints to just 38 yards in rushing and 120 in passing.
Scoring highlights:
Demetrice Gilbert -88 -yard touchdown on punt return
Darian Burns – 38 -yard interception return for touchdown
Joaquin Collazo – 89-yard touchdown pass to Avont Burrus
Terrance Roberts – 18- yard touchdown run
Collazo -76- yard touchdown pass to Davius Prather
Collazo – 10-yard touchdown pass to J D Dixon
Taylor Yancey -3-yard touchdown pass to Darel Middleton
Collazo – 39-yard touchdown pass to Burris
Austin Abbott – 38-yard field goal
Abbott hit six of seven point after attempts
Collazo was 17 of 25 in the air for 368 yards and four touchdowns. Roberts led the ground attack with 50 yards. Prather had four receptions for 132 yards. Burrus caught three passes for 131 yards. Ten different Wildcats caught passes in the game.
Twelve different Wildcats had three or more tackles in the win. Darrien Lewis picked off a Saint pass.
Coach Michael Jasper was pleased with the win. “We did a lot of things right today. Special team play was a huge key. We had great field position for the most part and our defense had a lot to do with that. Our offense started to click in the second quarter as we put five touchdowns on the board and that allowed us to take control. We can enjoy this for a few hours and then get ready to play an outstanding team in Lindsey Wilson next week in Columbia. We know our fans will be there to support us.”
Bethel University honored three former athletic greats with inductions into the prestigious Bethel Athletic Saturday morning during Homecoming week. Alicia James (Women’s Soccer), Leah Hensley Cripps (Softball), and Ricky Rosenjack (Men’s Golf & Contributor) are the latest to be inducted.
It marks the 42nd class to be honored. Six teams and 107 individuals have been enshrined since 1980.
Next Week: The Wildcats travel to Lindsey Wilson to battle the Blue Raiders. Kick-off is scheduled for 1:30 p.m. CST.