HUNTINGDON (November 11) — Veterans Day, an appropriate day to unveil the sign along a portion of Veterans Drive in Huntingdon named in honor of retired Air Force Colonel James C. Harding of Huntingdon. 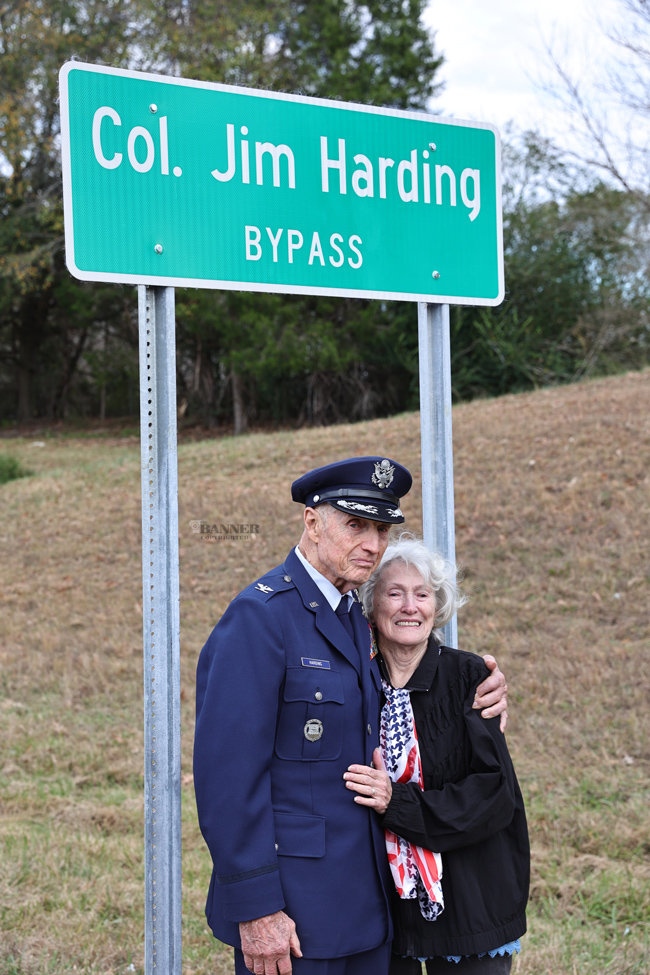 Colonel Harding and his wife, Barbara stand under the new sign in honor of the colonel. 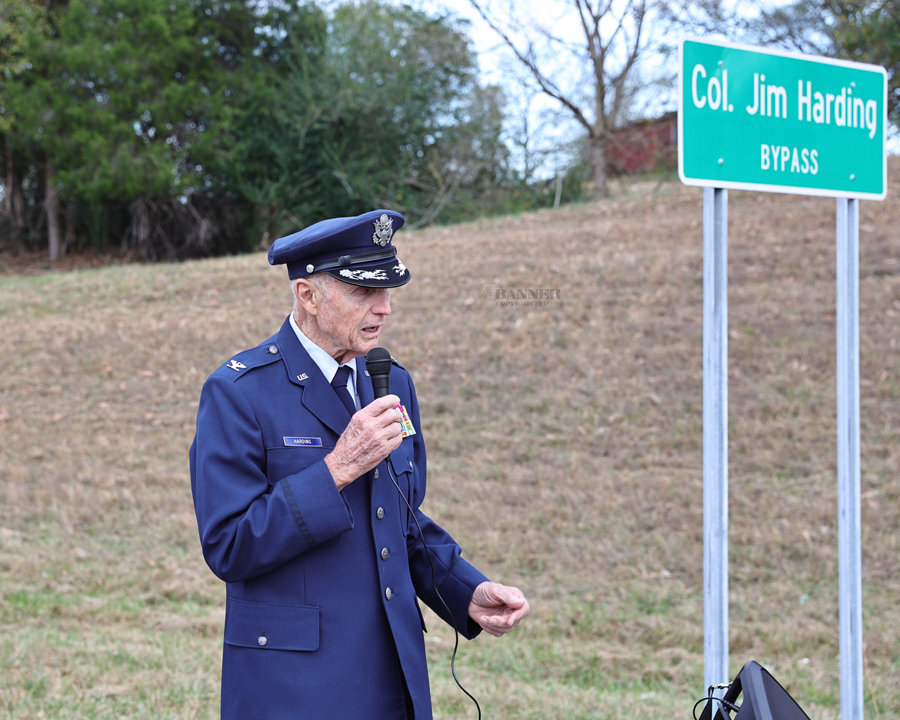 Colonel James Harding looks at the new sign erected in his honor.
Previous Next
Posted Tuesday, November 15, 2022 5:00 pm
By Joel Washburn
washburn@mckenziebanner.com
HUNTINGDON (November 11) — Veterans Day, an appropriate day to unveil the sign along a portion of Veterans Drive in Huntingdon named in honor of retired Air Force Colonel James C. Harding of Huntingdon.
Family and friends gathered for the unveiling of the sign near Buena Vista Road on Friday afternoon.
Colonel Harding wore his dress blue Air Force uniform for the occasion.
Cyril Ostiguy opened the event and Carroll County Mayor Joseph Butler presented Harding a framed copy of the legislation that named the section of highway.  Harding is one of the top 25 most decorated military person in the United States.
Harding humbly thanked the gathering and then Cyril and Janis Ostiguy unveiled the roadside sign as Harding looked on.
Harding and wife, Barbara stood under the sign for a photo opportunity.
In his career, Colonel Harding was awarded a number of medals, ribbons, and commendations for his service to our country, including the Air Force Cross, the Silver Star with two Oak Leaf clusters, the Legion of Merit with one Oak Leaf cluster, the Distinguished Flying Cross with eight Oak Leaf clusters, the Bronze Star with Combat V and one Oak Leaf cluster, the Purple Heart with three Oak Leaf clusters, the Meritorious Service Medal, the Air Medal with thirty-nine Oak Leaf clusters, the Air Force Commendation Medal with one Oak Leaf cluster, the Presidential Unit Citation with four Oak Leaf clusters, the USAF Outstanding Unit Award with Combat V and four Oak Leaf clusters, the Combat Readiness Medal with two Oak Leaf clusters, the National Defense Service Medal, the Armed Forces Expeditionary Medal, the Vietnam Service Medal with eight  Bronze Service Stars, the Vietnamese Cross of Gallantry with Silver Star, the Vietnamese Cross of Gallantry with Palm, the Republic of Vietnam Campaign Medal, and the Royal Thai Supreme Command Forward Badge 1st Class.
He served as squadron commander for a 400-person unit at Lackland Air Force Base and as an A-1 Skyraider combat squadron commander. Harding is one of the top 25 most decorated American veterans. Harding was born on June 27, 1934 in Brookville, Pennsylvania, one of five children into a dairy farming family.
He attended Pennsylvania State University studying for a Bachelor of Science in Agriculture. While at university he played lineman for the Penn State Nittany Lions football team. He turned down an offer to play for the Los Angeles Rams, as well as an opportunity to work for International Harvester. On graduation he was commissioned, on June 9, 1956, through the Air Force Reserve Officer Training Corps program which he passed with distinction, according to Wikipedia.
Harding served as an instructor pilot and aerial demonstration pilot at Lackland Air Force Base, Texas, until September 1962. He flew with the 558th Tactical Fighter Squadron at MacDill Air Force Base, from September 1962 to July 1963, and then transferred to the 313th Air Division at Kadena Air Base in Okinawa.
Harding flew 442 combat missions in the Cessna O-1 Bird Dog and U-10, of which 101 missions were over North Vietnam. He served as an Instructor with Squadron Officer School at Maxwell Air Force Base from 1967 to 1971, when he began training at Air Command and Staff College.
Harding returned to the U.S. in July 1967 and served as an Instructor with Squadron Officer School at Maxwell Air Force Base, until January 1971. Harding attended Air Command and Staff College from January to November 1971, and then returned to combat in Southeast Asia as the Commander of the 1st Special Operations Squadron at Nakhon Phanom Royal Thai Air Force Base in Thailand, where he flew another 154 combat missions in Douglas A-1 Skyraider.
In 1972 Mission To Rescue Major Clyde D. Smith A-1E Skyraider of 1st SOS
In 1972, he was engaged in the rescue of U.S. Marine Corps A-6 Intruder pilot Major Clyde D. Smith and bombardier/navigator, 1st Lt. Scott D. Ketchie, who were shot down over North Vietnam. 1st Lt. Ketchie was not rescued and was subsequently declared Missing in action. For his effort in leading the rescue mission, Harding was awarded the Air Force Cross. The rescue effort is depicted in History Channel.
Shoot-down and Evasion
He was shot down in Vietnam in 1972 northeast of Qui Nhon and just south of the DMZ — an area overrun by the North Vietnamese Army. He successfully evaded capture by the North Vietnamese and was rescued by U.S. Army helicopters.
Post War
After Vietnam, Harding then served with the 23rd Tactical Fighter Wing at England Air Force Base, from November 1972 to November 1973, followed by service at Randolph Air Force Base, where he served until June 1976.