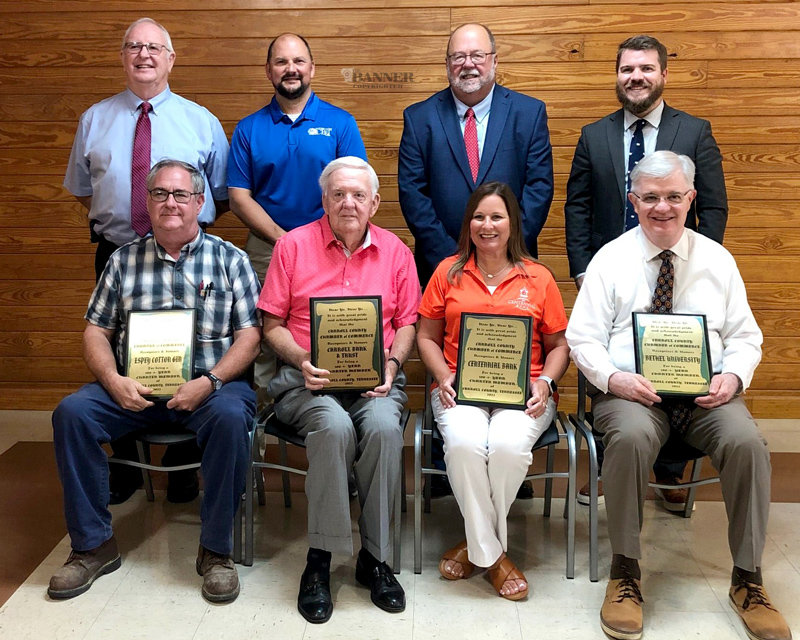 Front Row (L to R): Allen Espey, Billy Tines, Angela Browning, Walter Butler. Back Row (L to R): Phil Williams — McLemoresville Mayor, Michael Cary, Brad Hurley — Carroll Co. Chamber President, Joseph Butler — Carroll County Mayor.
Posted Tuesday, August 30, 2022 5:00 pm
By Jim Potts
jpotts@mckenziebanner.com
McLEMORESVILLE — The Carroll County Chamber of Commerce recognized four century old businesses on Friday morning, August 26, at the McLemoresville Activities Center. This celebration is part of the county-wide Bicentennial Celebration. These businesses include Bethel University, Carroll Bank & Trust, Centennial Bank, and Espey Cotton Gin.
Bethel University began as a small school in McLemoresville in 1846 and moved to McKenzie in 1869 and has been there since. It has grown to over 1,000 students per year with satellite locations throughout Tennessee. Carroll County native Walter Butler graduated from Bethel and serves as the president of the institution.
Carroll Bank & Trust was founded on September 9, 1907 located in McLemoresville and originally known as Bank of McLemoresville. J.H. Bramley was the first bank president. Over the next 50 years, the bank continued to serve the McLemoresville area under Bramley and five other men. In 1972, the bank ownership changed with Billy M. Cary becoming president and Billy B. Tines became executive vice-president. The name change to Carroll Bank & Trust occurred on February 17, 1987 and branched out to Huntingdon and McKenzie. The bank branched to Camden in 2006 and Milan in 2007 while purchasing the Bank of Bradford in 2008. The most recent branch opened in Paris in 2015.
Over 100 years ago, Centennial Bank was the vision of Mr. Arthur A. Argo, Sr. to have a community bank in Trezevant. Argo, Sr. wanted his business and community to work together to create a simple, honest tradition which still remains today.
The bank opened its doors on January 21, 1916 as Farmers & Merchants Bank with Argo, Sr. serving as the Bank’s first President. By 1935, Arthur Argo, Jr. began working in the bank learning the quality business ethics and community service values from his father. Argo, Jr. was named president of Farmers & Merchants Bank in 1960 and led it until 1980.
Mr. George L. Atwood, son-in-law of Mr. Argo, Jr, assumed the role of bank president and CEO in 1981. Atwood opened the Bank’s first branch in 1995 in Bolivar. Over the next 24 years, the Bank expanded into Rutherford, Three Way, McKenzie, Trenton, Medina, Middleton, Toone, Henderson, and Adamsville.
Atwood held his position as President/CEO until 2015, when he entrusted his daughters, Andrea Browning and Jennifer Marcus, to manage the Bank. Mr. Atwood continues to serve as the Bank’s Chairman of the Board.
The Bank celebrated 100 years of service in January 2016. In honor of this achievement, the Bank changed its name from Farmers & Merchants Bank to Centennial Bank to distinguish the Bank from other institutions in the region.
Jennifer, Bank Director, and Andrea, President/CEO, continue to operate Centennial Bank in a community bank atmosphere that reflects the values of their great-grandfather, Mr. Argo, Sr., their grandfather Mr. Argo, Jr., and their father, George Atwood.
The Espey Cotton Gin in McLemoresville began operation in 1898 as the Bramley Gin founded by James H. Bramley and operated by his son Adrain Bramley until his death. Mr. Orville Pace bought the business and continued to operate the business as Bramley Gin. After Pace’s death, his wife sold the business to Mr. Billy Espey in 1974. After Espey’s death in 1986, his son, Allen, took over and is the current owner and operator of the Gin. It presently operates under the name Espey Gin Company, Inc.
Following the presentations, Chamber of Commerce Executive, Brad Hurley announced there would be other such recognitions in the future during the county’s bicentennial celebration.