McKENZIE — The No. 4 Bethel Wildcats scored 28 points in the first quarter and coasted to a 59-6 victory over the visiting Faulkner Eagles Saturday afternoon. It was Senior Day for 19 Wildcats who were honored in pregame ceremonies. It was also Military/First Responders Appreciation Day. With the win, Bethel clinched the Mid-South Conference title. 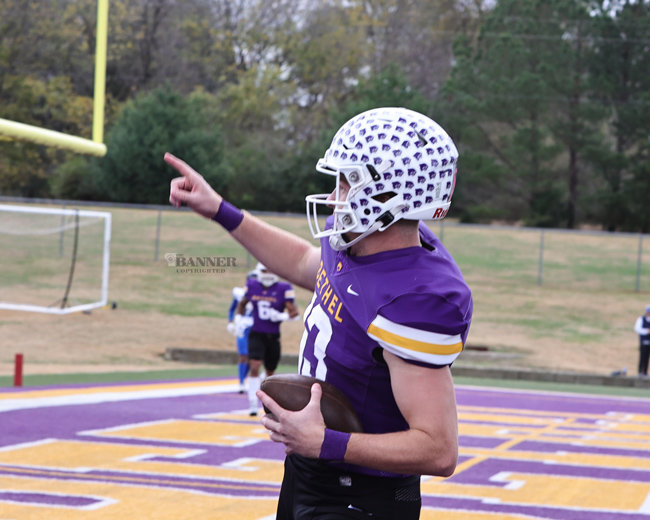 Bethel Quarterback Joaquin Collazo III
Posted Tuesday, November 8, 2022 12:49 pm
McKENZIE — The No. 4 Bethel Wildcats scored 28 points in the first quarter and coasted to a 59-6 victory over the visiting Faulkner Eagles Saturday afternoon. It was Senior Day for 19 Wildcats who were honored in pregame ceremonies. It was also Military/First Responders Appreciation Day. With the win, Bethel clinched the Mid-South Conference title.
Bethel won the coin toss which proved to be big. The Cats elected to defer and kicked off with winds gusting over 35 miles per hour at times. Forcing Faulkner to drive into the elements, the Bethel defense forced two early punts and a fumble which enabled the Cats to get early field position.
Joaquin Collazo and Darius Prather teamed up for a 30-yard pass to give the Cats the early lead. The pass was a result of Bethel taking over at the Faulkner thirty after the Cat defense forced an Eagle punt into the wind. A few minutes later Collazo hit JD Dixon on a one-yard pass and after a point after by Austin Abbott, Bethel led 14-0. Four minutes later, the two reversed roles as Dixon took a handoff and found Collazo on a 12-yard scoring toss. On the final play of the first quarter, Collazo found Avont Burrus  open on a short pattern. Burrus showed great balance and was able to shake off several would-be tacklers and go 62 yards for another score. Bethel led 28-3 at the half.
Bethel went ahead 31-3 on a third quarter 39- field goal by Abbott. Dakota Braswell rushed for a 72-yard touchdown run at the 8:27 mark of the third. After a Faulkner field goal, the score was 38-6 at the end of three,
Four seconds into the final frame, Collazo passed to Braswell for a three-yard score to make it 45-6. Braswell and Stavonski Wilkes added touchdown runs to cap off the scoring as Bethel moved to 10-0 overall and 7-0 in the league. The Eagles left West Tennessee at 4-6 and 3-4.
Collazo’s four touchdowns passes gave him 25 on the year. That ties him with Brent Dearmon for third most in a season by a Wildcat.
Braswell led the Wildcats in rushing with 94 on 14 carries. Burrus had five receptions for 122 yards.
Markel Crawford led Bethel with eight total tackles. Jakobe Griffin had seven, while Vonte Bates had six total stops. Demetrice Gilbert and DJ James had interceptions in the win.
Coach Michael Jasper had high praise for his team. “We got a break with the coin toss and used it to our advantage. I thought we played well in all three phases of the game. Our defense continues to excel, and the offense and special team units were consistent as well. We accomplished one of our goals in winning the conference title but want to get that record setting 11th win and us that for our ultimate goal in the playoffs.”
The Wildcats travel to Cumberland University to battle the Phoenix. Kick-off is scheduled for 1:30 p.m. CST.