HUNTINGDON (November 14) — On Monday’s meeting of the Carroll County Commission, members of the Civic Center Board learned of the resignation of the center’s current manager, Ben Canovan, at the end of the year. 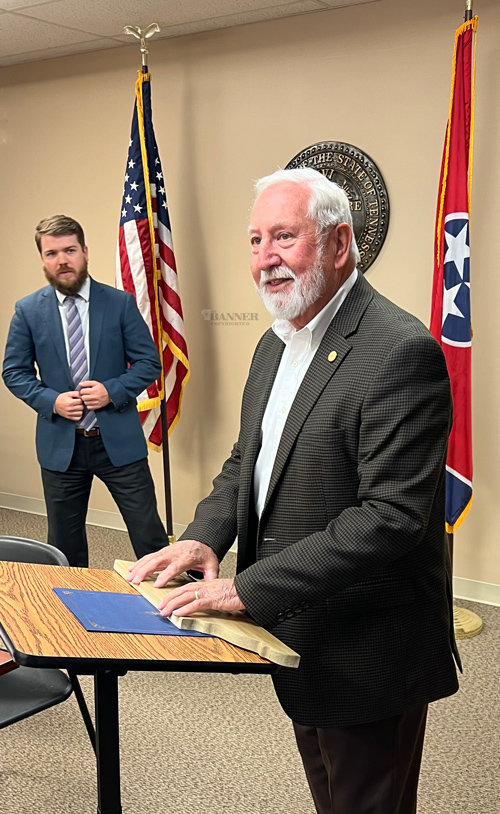 Representative Curtis Halford (right) addresses members of the Carroll County Commission following the presentation of a plaque and proclamation from County Mayor Joseph Butler (left).
Posted Tuesday, November 22, 2022 5:00 pm
By Jason Martin
jmartin@mckenziebanner.com
HUNTINGDON (November 14) — On Monday’s meeting of the Carroll County Commission, members of the Civic Center Board learned of the resignation of the center’s current manager, Ben Canovan, at the end of the year.  Members of the committee will provide a recommendation for the new manager to Mayor Joseph Butler. The deadline for applications is December 2, 2022. Board members include committee chairman Joey Darnall, Barry Mac Murphy, Lin Smith, Joey Simmons and Jason R. Martin.
Retiring State Representative Curtis Halford was presented with a resolution and plaque in appreciation for his service to Carroll County. Mayor Butler lauded Representative Halford’s service and expressed his gratitude along with the commission for his years of dedication.
The Carroll County Highway Department was authorized to a capital outlay note not exceeding $268,000. The 4.50% interest-bearing note will finance the purchase of two gravel trucks for the department.
The Sheriff’s Office received a $10,000 training equipment grant from the State of Tennessee; an amendment to the county budget was approved accepting the grant.
Following the approval of monthly reports and the quarterly report from the Indigent Care Board, former commissioner Hal Eason was appointed to fill the vacancy on the Carroll County Board of Education.
Resolutions reappointing Dana Cobb and Max Anderson to the Carroll County E911 Board of Directors were approved. Resolution 11-03-2022 reappointing Kenny Jackson as Judicial Commissioner was approved.
The commission approved Resolution 11-06-2022 to amend the American Rescue Plan Act Fund in Support of TEBF-ARP Projects. The resolution pledged approximately $500,000 to the project with Charter Communications and People Telephone Company (TEC). The broadband providers were awarded a grant from the state with pledged money from the Biden administration’s American Rescue Plan monies. Commissioner Lana Suite was the sole vote against the resolution.
Resolution 11-07-2022 - Local Hazard Mitigation Plan for Carroll County - was adopted. The plan identifies hazards, establishes community goals and objectives, and selects mitigation activities appropriate for the county. The plan is provided to FEMA and TEMA.
Notaries elected during the November meeting were Rachel Amalong, Kendra Carter, Andriana Ezell, Shawna Fowler, Joan Ann Grammer, Jonathan Kee, Pam Kee, Joyce Russell, Katie Sanders, Gary Simmons and Nina Thompson.
Commissioners not present during the meeting were Daniel Willman, Daniel Thomas and Philip Moore.
*The writer of this article, Jason R. Martin, holds an elected seat on the Carroll County Commission.