McKENZIE (AUGUST 28) — The memorial service of Sergeant Harold Lee Russell, II, a McKenzie native and a sergeant with the Tennessee Highway Patrol, was Sunday, August 28 at 2 p.m. The 2005 graduate of McKenzie High School died Tuesday, August 23 in a helicopter accident. 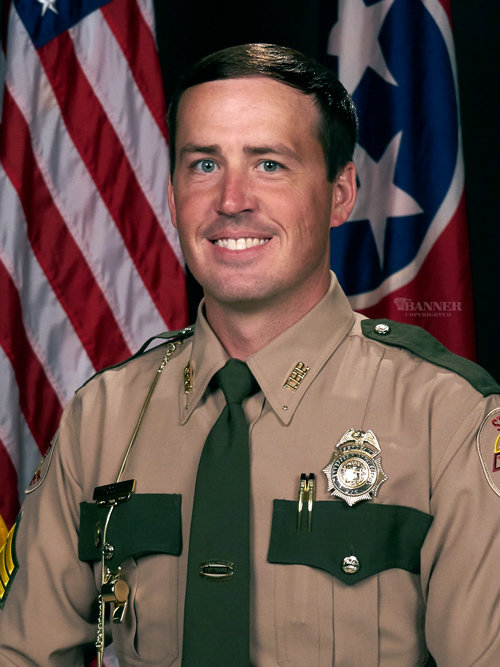 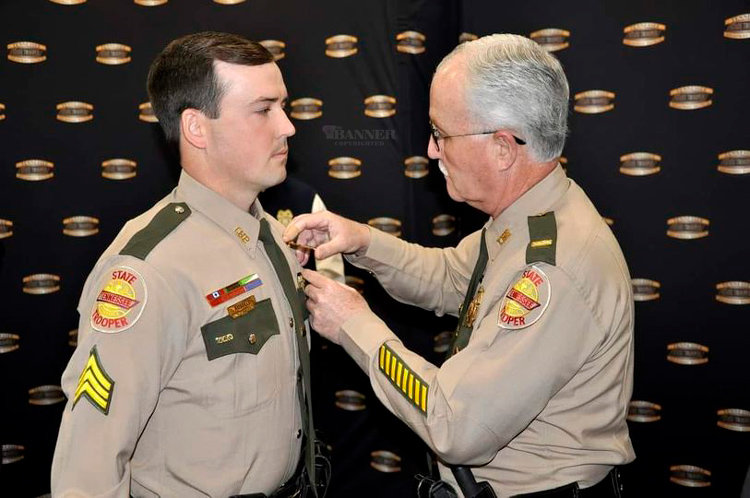 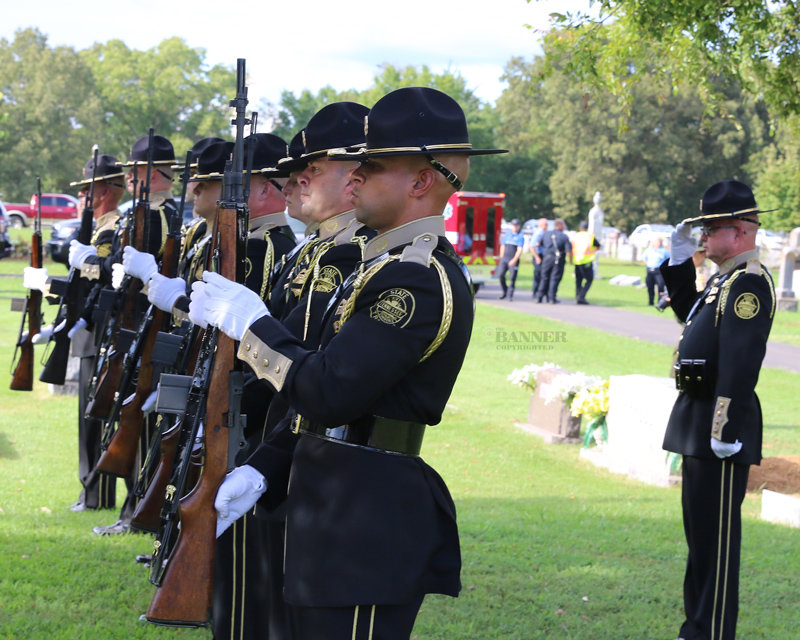 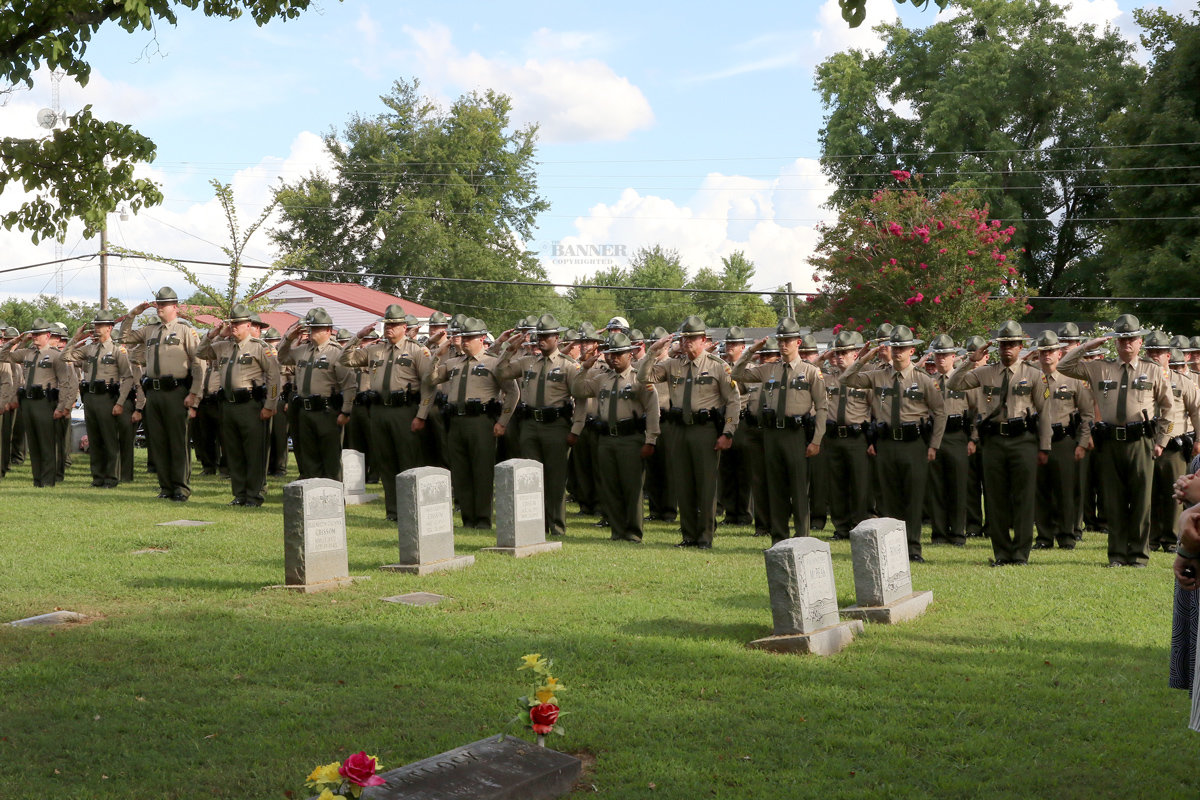 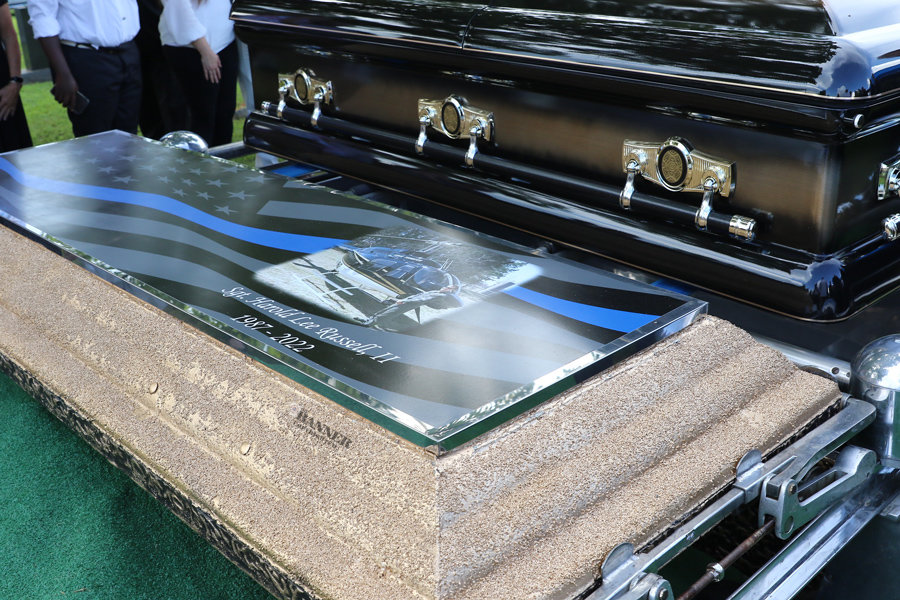 Sergeant Lee Russell’s vault was engraved with a photograph of Lee and his helicopter.
Photo by Joel Washburn/The Banner 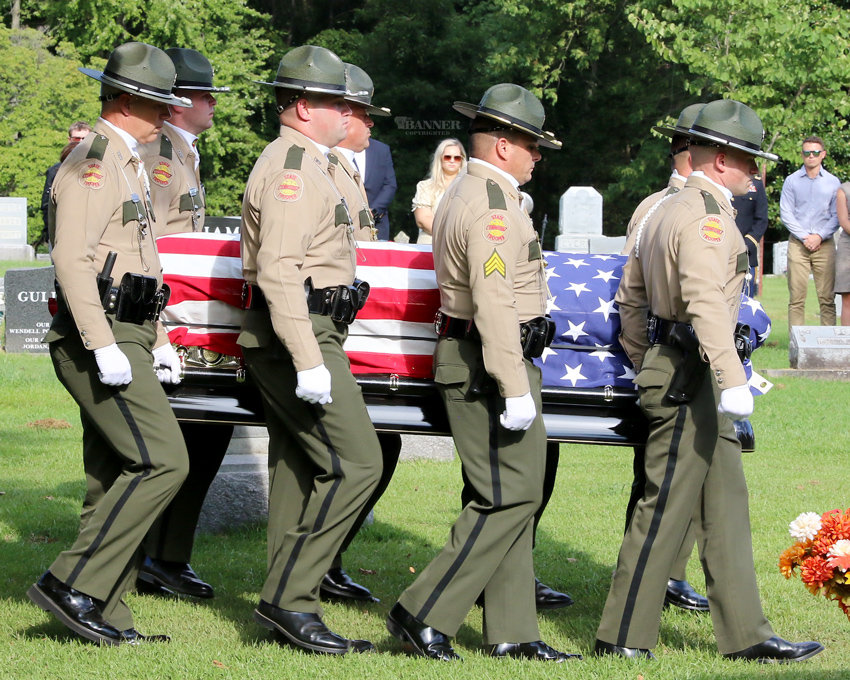 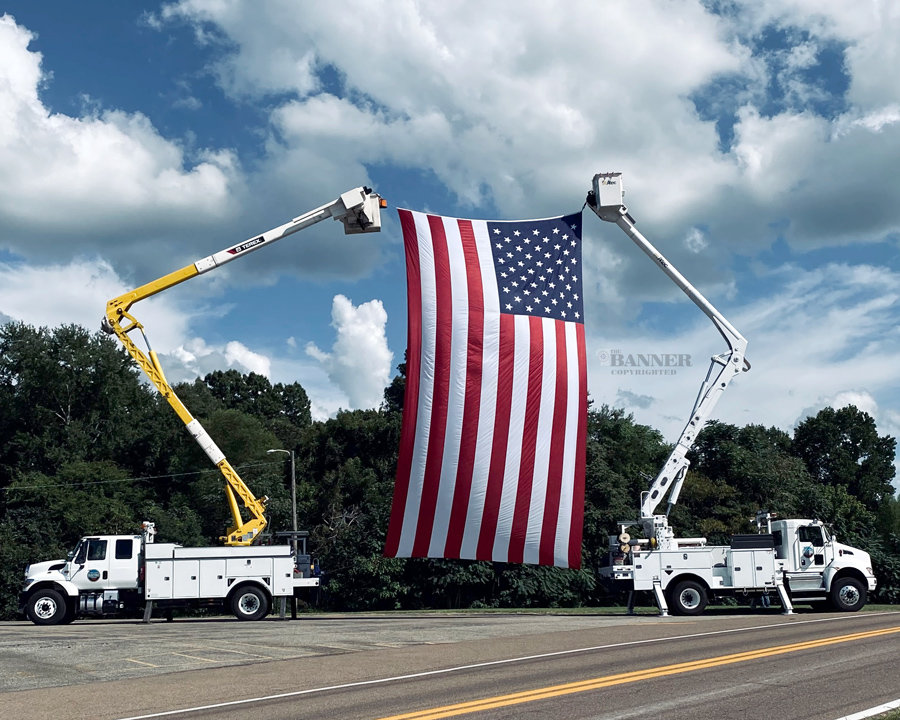 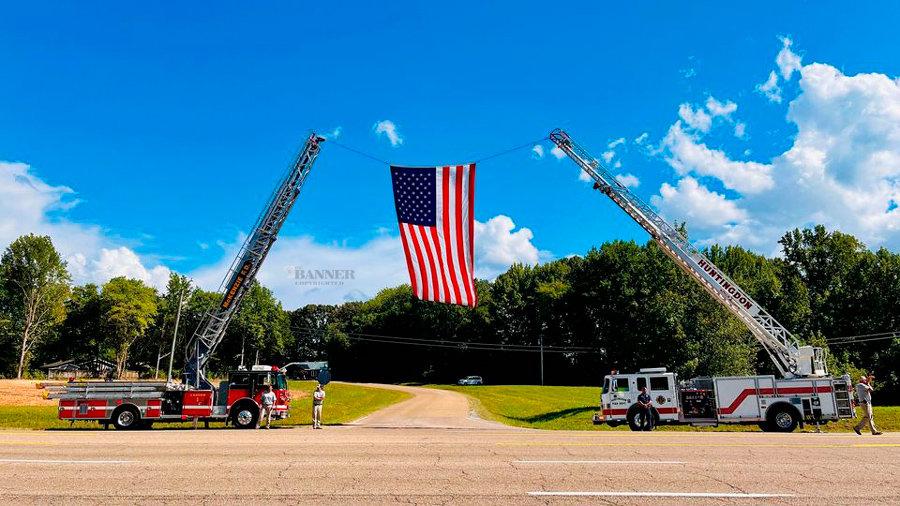 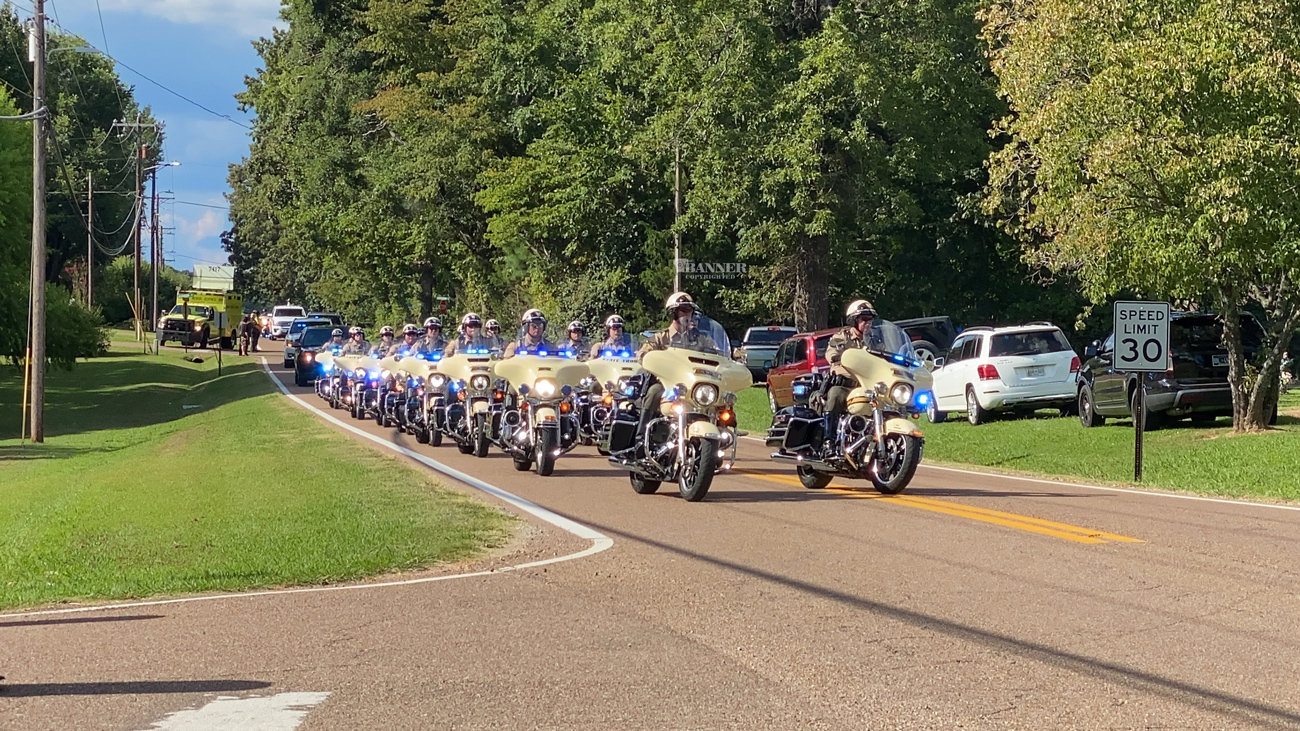 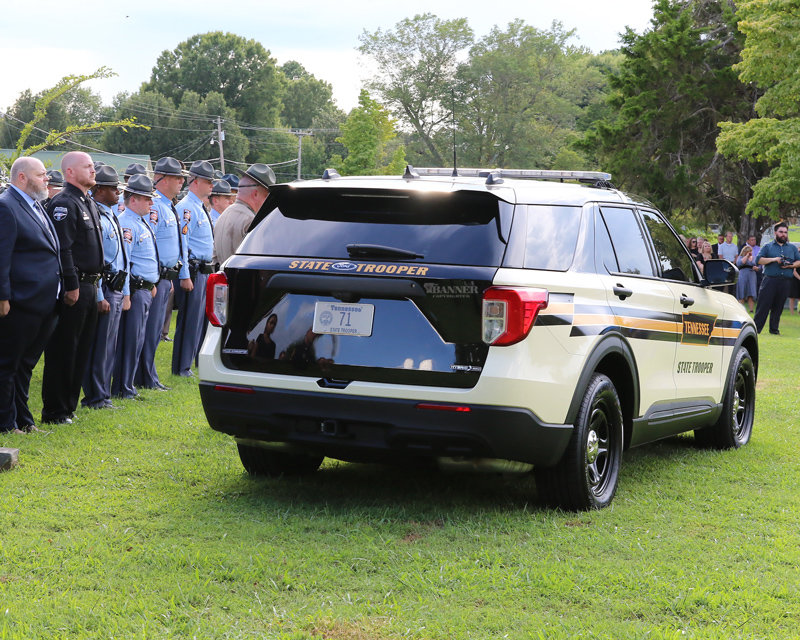 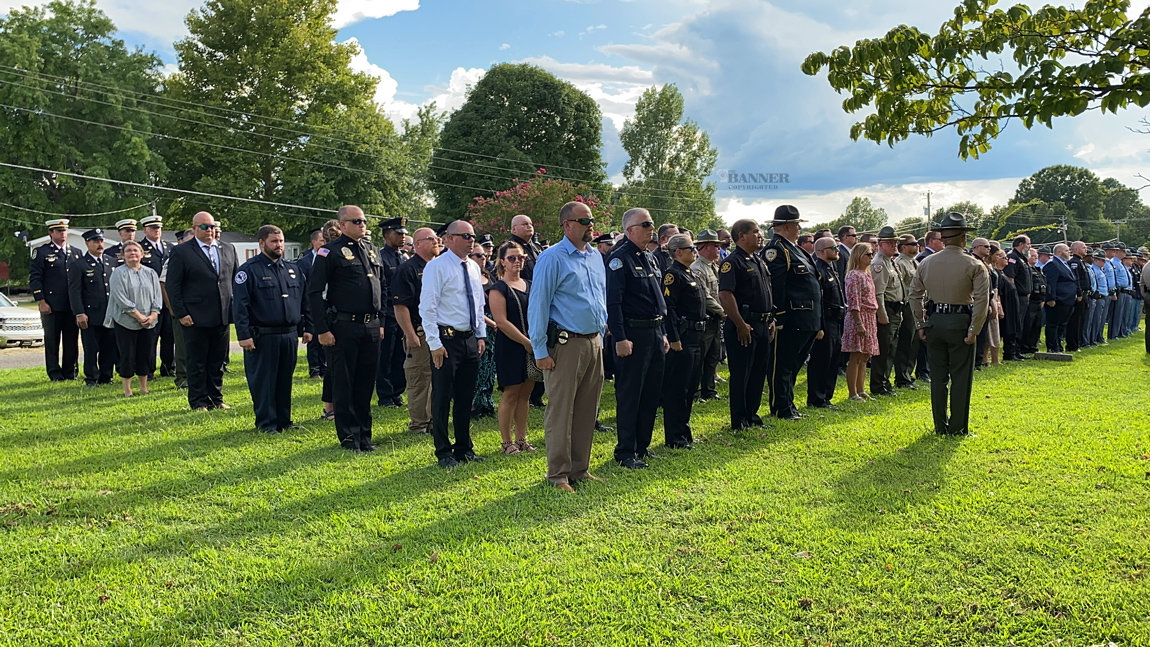 Law enforcement and first responders from throughout the United States stand in formation as a sign of respect.
Photo by Joel Washburn/The Banner 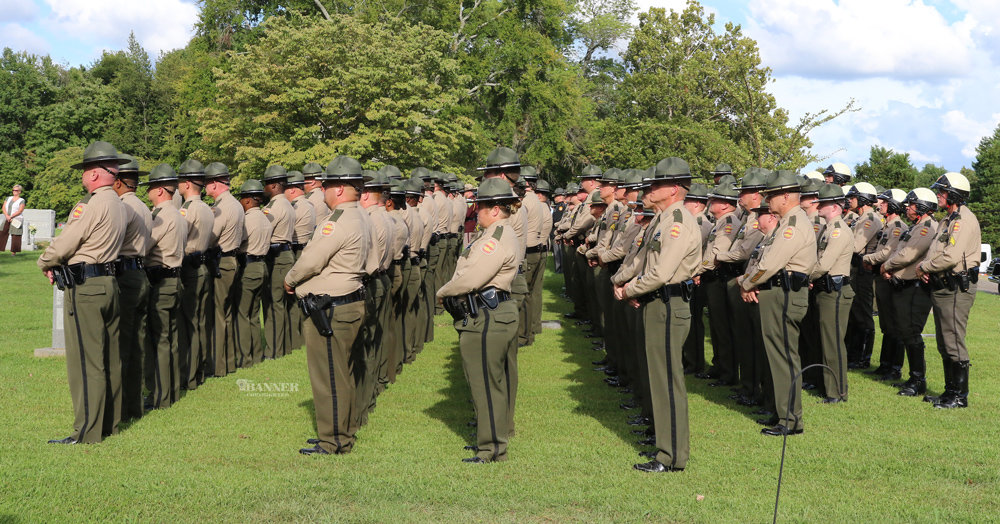 THP Troopers stand in formation as a sign of solidarity.
Photo by Joel Washburn/The Banner
Previous Next
Posted Tuesday, August 30, 2022 5:00 pm
McKENZIE (AUGUST 28) — The memorial service of Sergeant Harold Lee Russell, II, a McKenzie native and a sergeant with the Tennessee Highway Patrol, was Sunday, August 28 at 2 p.m. The 2005 graduate of McKenzie High School died Tuesday, August 23 in a helicopter accident.
The outpouring of love from friends, family, community and the law enforcement community was unbelievable, said Steve and Cherry Russell, parents to  Sergeant Lee Russell. They asked that people continue to pray for the Russell family and the family of Matt Blansett, the Marion County officer who was flying with Sgt. Russell when the crash occurred in Marion County. Both Lee Russell and Matt Blansett leave a wife and two young children.
Steve and Cherry Russell said they do not know how to repay the people who offered their condolences and prayers. Lee touched many lives from Memphis to Kingsport, said the Russells. We can’t express how much love we have had over the last few days. People as far as Utah have reached out to express their condolences.
“We have the best community in the world. There is nothing like this community. It is a privilege to grow up and live here,” said Steve.
Steve said the THP and the State of Tennessee were very helpful throughout the week.
At Lee’s funeral on Sunday, Governor Bill Lee, THP Colonel Matt Perry, and Lee’s minister, Dennis Trull provided the eulogy.
The small city of McKenzie provided an outpouring of support and love for their native son, whose life ended at a young age. When Russell’s body was returned to McKenzie, the highway in front of the funeral home was closed as officers lined the roadway and a THP helicopter landed with Lee’s body to be transferred to the funeral home. Members of the community gathered in silence to watch the transfer and to honor Lee’s memory.
During visitation on Saturday, the funeral home was filled to capacity of local citizens, and law enforcement officers and other first responders.
Hundreds of  law enforcement officers from many states attended the memorial services and participated in the graveside services. There were honor guards from the Tennessee Highway Patrol during visitation at the Brummitt-McKenzie Funeral Home on Saturday and the funeral services at Long Heights Baptist Church on Sunday afternoon. Area citizens parked along U.S. 79 to watch the processional and honor the memory of Sergeant Russell, a hometown hero, who they held in high esteem.
A funeral processional stretched from the church to Mt. Olivet Cemetery on State Route 436 (Cherrywood Road) in McKenzie. At the graveside service, THP officers stood in formation and along them were officers from law enforcement and other first responder units from local agencies, state agencies, and other states.
THP Memorializes Sergeant Russell
The Tennessee Highway Patrol (THP) is mourning the death of sergeant and helicopter pilot Lee Russell, who served our state for nearly 12 years while living out his dream career that combined his love for law enforcement and aviation.
Sergeant Russell lost his life in service to Tennesseans in a helicopter crash Tuesday afternoon in Marion County.
“Our state has lost an exceptional public servant who came to work every day to help people,” THP Colonel Matt Perry said.  “Lee’s passion for law enforcement and flying put him in a unique position to help find missing persons, criminal suspects, and advance investigations across multiple counties.  We will sorely miss Lee as a friend, colleague, and exceptionally dedicated member of the Tennessee Highway Patrol.”
Sergeant Russell, from McKenzie, Tennessee, began his law enforcement career in 2007 as a reserve deputy for the Henry County Sheriff’s Office while still a student at the University of Tennessee at Martin.  He completed an internship with the Tennessee Bureau of Investigation before receiving his bachelor’s degree, magna cum laude, and becoming a full-time Henry County Sheriff’s Deputy in 2008.  The following year, he took to the air in a law enforcement capacity as a part-time pilot while serving on the 24th Judicial District Drug Task Force.
Sergeant Russell transitioned to the THP in 2010.  After graduation from cadet school, he was assigned to Hickman County before transferring to Dickson County in March 2012.  Sergeant Russell was selected as a THP pilot in May 2012 and was transferred to the Carroll County Airport so that the state would have a helicopter available in that portion of West Tennessee.  He was promoted to sergeant on November 12, 2017.
During his tenure with the THP, Sergeant Russell received advanced flight training, focusing primarily on Airborne Law Enforcement techniques.  He held an Airline Transport Pilot & Certified Flight Instructor Certificate and two Cessna Jet type ratings.  He gave presentations and instruction on the use of aircraft to THP Strike Teams, Trooper Cadet Schools, THP supervisors, Tennessee Park Rangers, TBI agents, local law enforcement agencies, and citizen organizations.
Sergeant Russell received multiple awards and recognitions during his career, including THP Lifesaver Awards, Governor’s Highway Safety Office Hero of the Year Award, and several letters of commendation for multiple lifesaving events and criminal apprehensions.
Sergeant Russell is survived by his wife,  Mandi Essary Russell and two children ages 1 and 5, son, Connor, daughter,  Tenley, parents, Steve, a retired lieutenant with the THP, and Cherry Russell, brother, Dr. Travis Russell (Dr. Bethany Russell), paternal grandmother, Suzanne Russell, father and mother-in-law, Ray and Trish Essary, sisters-in-law, Abby Mayo (Matt) and Misty Wyatt (Robert), nieces, Demi, Piper, and Leah, and two nephews, Aiden and Easton.
Sgt. Russell is preceded in death by his grandparents, his namesake, Dr. Harold and Fay Russell, and Finis and Frances Murray.