Daniel Hollowell is always thinking of ways to serve others and provide solutions to area residents. Not, as he said, “to see how much money I can make, but to see something start small and watch it grow.” As an agent with Maddox Insurance since 2013, he enjoys helping people in McKenzie, Huntingdon and Camden protect their largest assets, but he always had a dream of getting into the agricultural industry. 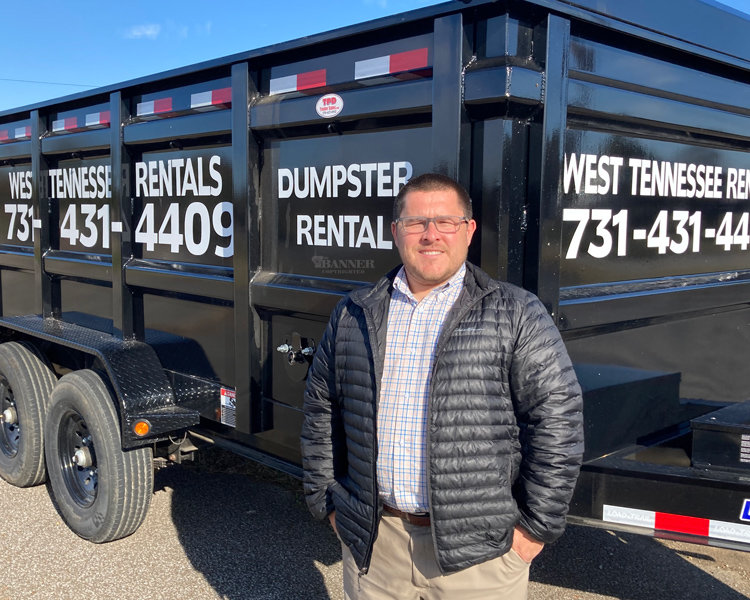 Posted Tuesday, November 22, 2022 5:00 pm
By Karen Forester
features@mckenziebanner.com
Daniel Hollowell is always thinking of ways to serve others and provide solutions to area residents. Not, as he said, “to see how much money I can make, but to see something start small and watch it grow.” As an agent with Maddox Insurance since 2013, he enjoys helping people in McKenzie, Huntingdon and Camden protect their largest assets, but he always had a dream of getting into the agricultural industry.
Knowing how difficult it was to launch a successful row crop operation from scratch, Daniel started looking at other options. He talked to someone he knew who contracted with Tosh Farms in Henry, Tennessee, and realized a good opportunity. He contacted the company to learn more. In 2019 Daniel bought 53 acres off Highway 423 and built a finishing farm, which he named Hollowell Hogs, to grow piglets into ‘top hogs’ ready for market. Tosh Farms, the largest pork producer in Tennessee, provides the pigs, feed and other essentials necessary to the maturation process. Each year Daniel receives two sets of 5000 piglets and spends the next 20 weeks raising them safely and responsibly. The daily chores associated with running a successful farm also mean quality time with his young sons. “They’re right beside me doing the farm chores every day,” said Daniel. His eldest son, Tripp, 8, and Neyland, 6, love helping their dad with the pigs and never miss a chance to pitch in. Daniel hopes Hollowell Hogs becomes a generational farming operation in the future. His wife, Amy, is expecting a little girl in February and Daniel is sure she’ll become an equally enthusiastic helper in a few years. He is proud of the role he and his family play in feeding America.
Daniel credits his parents, Billy and Angie, with instilling a strong work ethic in him at a young age. He remembers asking them for a four-wheeler when he was 13. “They said I could have one, so we went to the bank, took out a loan and then they told me I had to pay for it.” He spent his summer mowing ten different lawns. “At the time,” he laughs, “I thought they were the meanest parents in the world.” Now, Daniel understands the valuable lesson that experience taught him. He understands hard work is the key to success and has applied that concept throughout his life.
Graduating from McKenzie High School in 2004, Daniel enrolled at Bethel University and began working toward a degree in Business Administration with a Management emphasis which he earned in 2008. During those years, he decided to join the McKenzie Fire Department as a volunteer firefighter in 2006 and is still an active member. He thinks the adrenaline rush he used to get from playing outside linebacker for the Rebels may have initially influenced his desire to become a firefighter. However, he knew right away it was much more than that. Daniel welcomed the opportunity to help people in their time of need and do everything he could along with his fellow firefighters to save structures and property from fire. After six years with the Fire Department and working often with ambulances, he wanted to become an Emergency Medical Technician (EMT). He enrolled in Saturday School at Dyersburg State Community College while working full time and, in 2012, completed his coursework and certification as an advanced EMT. He has also worked his way up through the Fire Department and now serves as an assistant chief overseeing motor vehicle incidents.
Still, Daniel believes there are other ways he can help people. In July 2022 he bought two seven-foot by 14’ by four-foot dumpsters and opened West Tennessee Rentals. The dump trailers are available for commercial use, but primarily geared to residential needs. The brightly painted black and white cans are designed not to tear up lawns or driveways. When reserved, the dumpsters are delivered directly to the house and picked up when full. West Tennessee Rentals offer daily, three-day or weekly packages and, when not in use, are parked at Maddox Insurance.
Daniel is an active member of the McKenzie Industrial Board and the Chamber of Commerce as well as the Rotary Club. He and his family attend the First Baptist Church where he serves as a deacon. The role allows him to help meet the needs of the congregation as well as visitors and new members. In their spare time, the family loves camping and recently bought a pull-behind camper. While mostly going to Piney Campground in Dover, they recently traveled to Myrtle Beach, South Carolina, for a great vacation. Since both of his sons are active in football, baseball and basketball, the Hollowell family are always attending sporting events around the region.
“My brain never shuts off; I’m always thinking of ways to serve others.” It is apparent there is a strong theme of service throughout Daniel’s various professions. He is committed to his faith, family, friends and community in the way he lives his life. Whether he is assisting a local farmer insure his harvesting equipment, growing piglets into healthy hogs, assisting at the scene of a threatening fire or designing a niche market in the residential dumpster industry, Daniel is seldom idle.