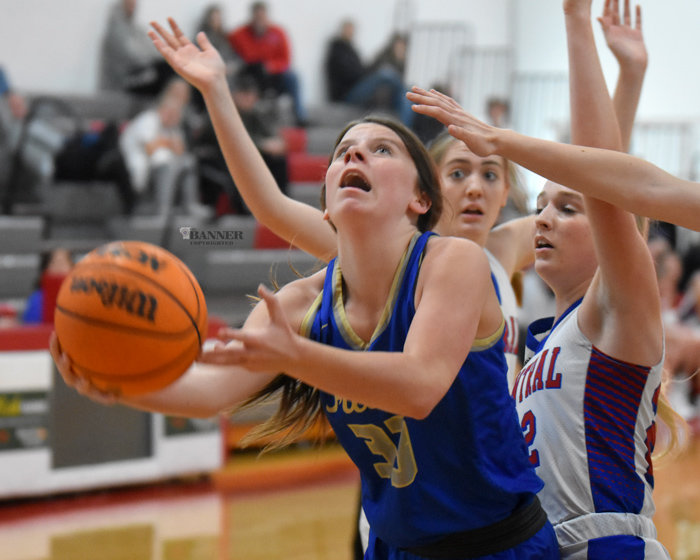 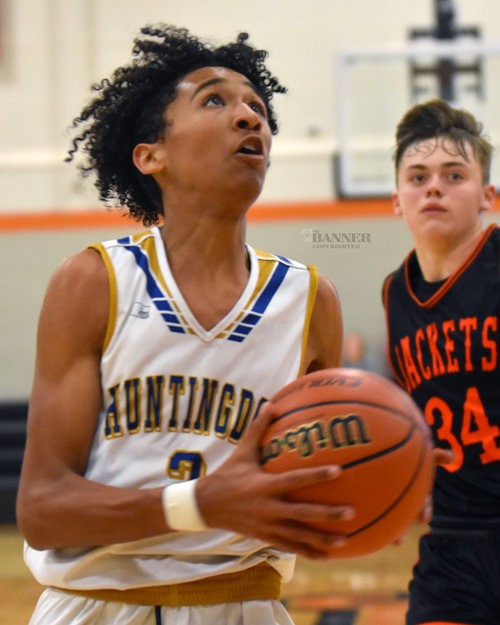 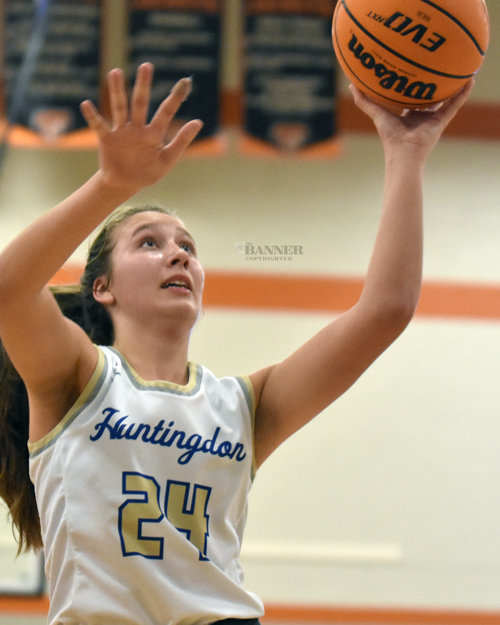 Lilly Kee (24) with a one-handed shot.
Photo by Jim Potts/The Banner
Previous Next
Posted Tuesday, November 22, 2022 3:42 pm
By Jim Potts
jpotts@mckenziebanner.com
McKENZIE (November 19) — Huntingdon’s Fillies participated in a basketball double header at McKenzie on Saturday afternoon playing Obion Central.
The first period started slow with the Fillies leading 6-3 with just over two minutes left to play. Huntingdon got hot down the stretch outscoring Obion’s Lady Rebels 10-4 to lead 16-7 at the end of one period. The Fillies used balanced scoring and tough defense to build a 33-17 lead by halftime.
The third period was the closest with Huntingdon barely outscoring Obion 19-17 but still led 52-34 heading into the final period. The Fillies torched Obion in the last period outscoring the Lady Rebels 24-9 to secure a 74-43 win.
Huntingdon’s Lilly Kee led all scorers with 20 points followed by Delaney Byars with 13 points. Sydney Anderson and Sophie Singleton added 10 points and eight points respectively. Josey Stokes had six points while Annabelle Singleton and Sara Beth Smith contributed five points each. Lia Fuller, Quinn Kelley, and Juli Harris had three points each for the Fillies.
Alayna Fussell led Obion County with 13 points while Brea Martin and Kelvia Campbell added nine points and eight points respectively. Emerl Lee contributed six points while Preslee Jurrson had three points. Emma Waites and Hannah Taylor chipped in two points and one point for the Lady Rebels.
Later on Saturday evening, Huntingdon traveled to Greenfield for a pair of games winning both of them. The Fillies went wire to wire leading 11-4 after one period and rolled to a 74-43 win over the Lady Rebels.
Sophie Singleton had the hot hand for the Fillies with 27 points while Lilly Kee followed with 17 points. Sydney Anderson added eight points while Sara Beth Smith added six points for the Fillies. Annabelle Singleton and Quinn Kelley had four points each while Juli Harris and Delaney Byars chipped in three points and two points for Huntingdon.
Greenfield was led by Emma Grace Alford with 20 while Jacie Allen and Jayleigh Bowers added five points each. Stormie Ricketts and Anastyn Vujicic had four points each while Brenley Little and Jolie Lunsford chipped in three points and two points respectively for the Lady Yellow Jackets.
In boys action, it was a barnburner from start to finish. The lead changed hands several times in the first period alone with Huntingdon leading 16-12 after one period. More of the same in the second period with the lead changing hands multiple times with the Mustangs holding a slim 34-33 lead at the half.
Both teams stayed with each other through the third period with Greenfield scoring just before the buzzer to lead 51-50 heading into the fourth period. Free throws became a factor in the final period with the Mustangs hitting a bunch of them down the stretch to win 71-66.
Four Mustangs scored in double figures led by EJ Lewis and Ethan Ramsey with22 points and 16 points followed by Caleb Ezell and Tycen Willis with 12 points each. Keyshawn Bailey and Owen Krueziger added four points each while Landon Bryant chipped in a point for the Mustangs.
Greenfield was led by Barkley Biggs with 28 points while Matt Scates had 15 points for the Yellowjackets. John Featherson, Eli St. Romain, and Easton Sullivan all had six points each while Kirk Bowers and Dontavious Williams chipped in three points and two points respectively for Greenfield.