HUNTINGDON — The Huntingdon Mustangs wasted no time establishing they belonged in the playoffs scoring four touchdowns in the opening frame and added three more in the second quarter racking up 50 first half points against Memphis Mitchell and won the contest 50-12. 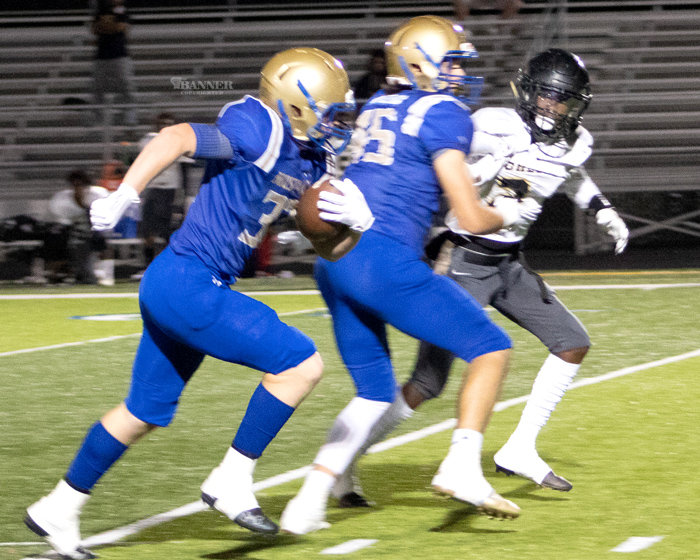 Silas Sharp (32) follows his blocker for yards against Mitchell.
Photo by Jim and Jessa Potts/The Banner 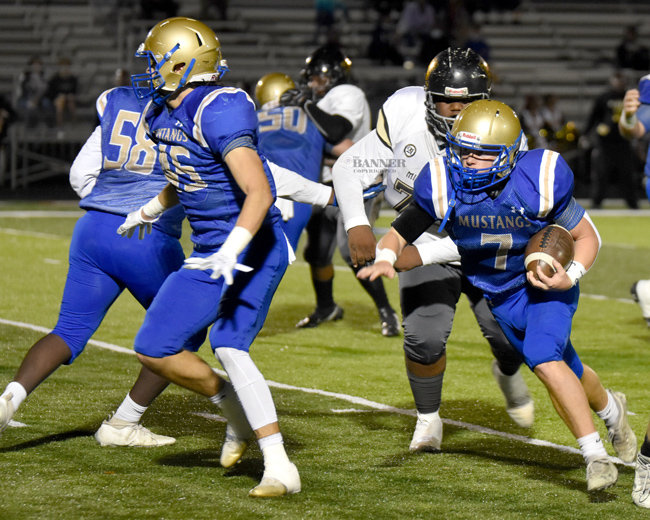 Landon Gordon (7) finds running room through the hole.
Photo by Jim and Jessa Potts/The Banner
Previous Next
Posted Tuesday, November 8, 2022 12:56 pm
By Jim Potts
jpotts@mckenziebanner.com
HUNTINGDON — The Huntingdon Mustangs wasted no time establishing they belonged in the playoffs scoring four touchdowns in the opening frame and added three more in the second quarter racking up 50 first half points against Memphis Mitchell and won the contest 50-12.
The Mustangs won the coin toss and elected to defer to the second half to start the game. They allowed no return on the kickoff with the Tigers starting their opening drive from their own 16 yard line. On third down, Mitchell fumbled with Mustang Kaleb Pearson recovering at the Tiger 18 yard line. Huntingdon needed only three plays to put the first points on the board. Elijah Flowers covered the first nine yards on a run and Ashton Hutcherson ran twice for five yards including a 1-yard touchdown run with 8:45 left in the first quarter. The PAT was good for a 7-0 Mustang lead.
Mitchell’s second possession made it to near midfield where they turned the ball over on downs to the Mustangs at the Huntingdon 46 yard line. A Gray Eubanks to Silas Sharp pass for 27 yards set up Huntingdon’s second score. It came on a 7-yard run by Elijah Flowers with 5:53 left in the first quarter. The PAT was no good leaving the score 13-0 in favor of the Mustangs.
A short Mitchell possession and a short punt left Huntingdon at the Tiger 28-yard line to start their third possession. The Mustangs kept it on the ground pounding out short yardage plays until Eubanks capped the drive with a 4-yard touchdown run with 1:24 left in the opening quarter. They added a two-point conversion run extending their lead to 21-0.
Just a few seconds later, Landon Gordon stepped in front of a Mitchell pass and took it 80 yards for a Mustang touchdown with under a minute to play in the quarter. The PAT was good for a 28-0 lead heading into the second quarter.
After forcing the Mitchell Tigers to punt again, the Mustangs were in the endzone again two plays later on a 49-yard romp by Landon Gordon with less than a minute gone in the second quarter. They completed a 2-point conversion play to extend the score to 36-0 with 11:06 left in the half. The running clock began right after the score.
The Mustangs got the ball back a short time later after a Mitchell punt went straight up and was recovered at the Mitchell 44-yard line. Gray Eubanks finished a three-play drive with a 17-yard touchdown run with the PAT good for a 43-0 lead with 3:44 left in the second quarter.
Huntingdon got the ball one more time before the half and scored another touchdown with just seconds left on a 7-yard TD by Eubanks. The PAT was good for a 50-0 lead at the half.
Mitchell’s Tigers scored twice in the second half while younger Mustangs were getting valuable playoff experience on the field. Neither one of the Tigers conversion attempts were good leaving the score 50-12 which was the final score. Huntingdon advances to face Memphis Fairley (11-0) in Memphis this week. Fairley defeated Camden in the first round.