MILAN — The latest edition of the Dog and Pony Show (Huntingdon Mustangs and Milan Bulldogs) saw the ponies outrun the dogs 42-21 in a continuation of one of West Tennessee’s oldest rivalries Friday night, September 23, at Milan. 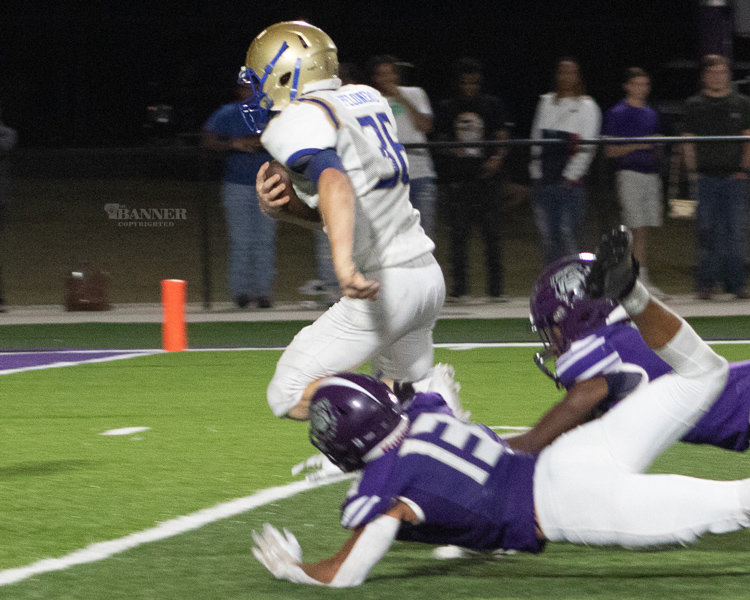 C.J. Pelonero heads for a Mustang touchdown against Milan. 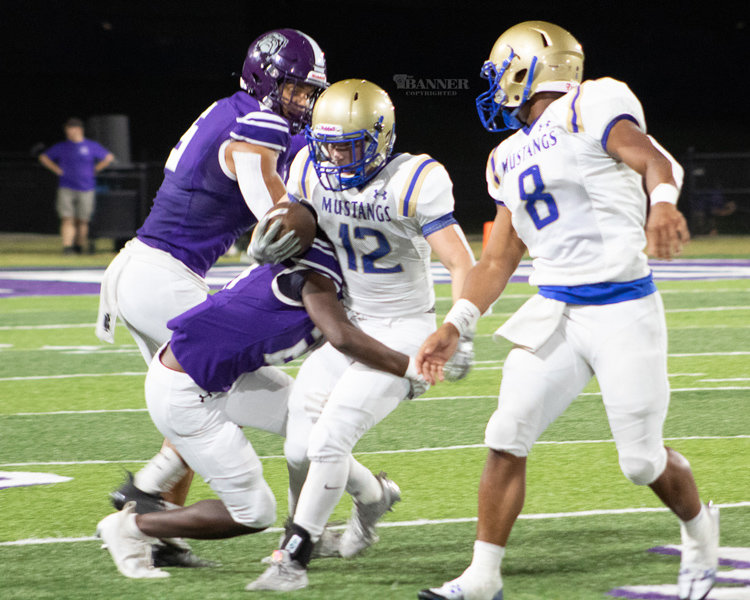 Ashton Hutcherson (12) wrapped up by a Bulldog defender.
Previous Next
Posted Tuesday, September 27, 2022 1:51 pm
By Jim Potts
jpotts@mckenziebanner.com
MILAN — The latest edition of the Dog and Pony Show (Huntingdon Mustangs and Milan Bulldogs) saw the ponies outrun the dogs 42-21 in a continuation of one of West Tennessee’s oldest rivalries Friday night, September 23, at Milan.
The Mustangs won the toss and elected to defer to the second half. Milan got a decent kickoff return and scored in three quick plays with less than a minute off the clock. The key play was a 41-yard pass which set up a 15-yard touchdown run with 11:18 left on the first quarter clock. The extra point was good for a 7-0 Milan lead.
After a touchback on the ensuing kickoff, Huntingdon took the ball at their own 20 and launched a slow methodical drive that chewed the next nine minutes off the clock before Gray Eubanks scored on a 2-yard touchdown run with 2:45 left in the opening quarter. The extra point was good tying the game 7-7.
Milan drove from the Bulldog 40 to near midfield where they launched a 51-yard touchdown pass with 46 seconds left in the first quarter. The PAT was good for a 14-7 Milan lead.
Huntingdon took the ensuing kickoff with just seconds left in the first quarter and used up nearly half of the second quarter clock on their second possession of the game which resulted in a 5-yard Elijah Flowers touchdown with 6:56 left in the second quarter. The extra point was no good leaving Milan with a 14-13 lead.
The Mustang defense put a stop to the next Bulldog possession with a 10-yard sack forcing Milan to punt. Huntingdon’s third possession featured some big plays starting with a 15-yard run on first down followed by a 23-yard run by Ashton Hutcherson for a first down. Several plays later, Gray Eubanks connected with Elijah Flowers on a 35-yard touchdown pass with 1:59 left in the first half giving them a 19-14 lead. The Mustangs attempted a 2-point conversion which failed.
Milan took the ball with less than two minutes left in the half and drove 70 yards regaining the lead on a 10-yard TD pass with 8 seconds left to play. Their extra point attempt was good for a 21-19 halftime lead.
Huntingdon’s decision to defer to the second half turned out to be a good one using up nearly half of the third quarter clock on an 80-yard drive resulting in a 8-yard touchdown by Elijah Flowers. The Mustangs converted a two-point play to regain the lead 27-21 with 6:56 left in the third quarter. They recovered the ensuing kickoff and scored again on a 1-yard touchdown run by Eubanks. They converted another 2-point play taking a 35-21 lead with 4:34 left in the third quarter.
The Mustang defense disrupted the next Milan possession sacking the Bulldog quarterback for a loss and recovering a fumble to end the third quarter. Milan intercepted a Mustang pass early in the fourth quarter and drove inside the Mustang 10 where Huntingdon’s defense stuffed a third down run for a loss and forced an incomplete pass on fourth down to regain possession on downs.
The Mustangs drove 95 yards aided by a pair of 15-yard Milan penalties and scored on a 27-yard touchdown run by C.J. Pelonero with 4:22 to play in the game. The extra point was good for a 42-21 Huntingdon lead. The two teams swapped possessions to run out the clock on the Mustang’s fifth straight win.
Huntingdon improves to 5-1 and plays host to Gibson County this week.