Huntingdon teams are winding down the season to tournament time in the next few weeks for volleyball, soccer, and cross country. 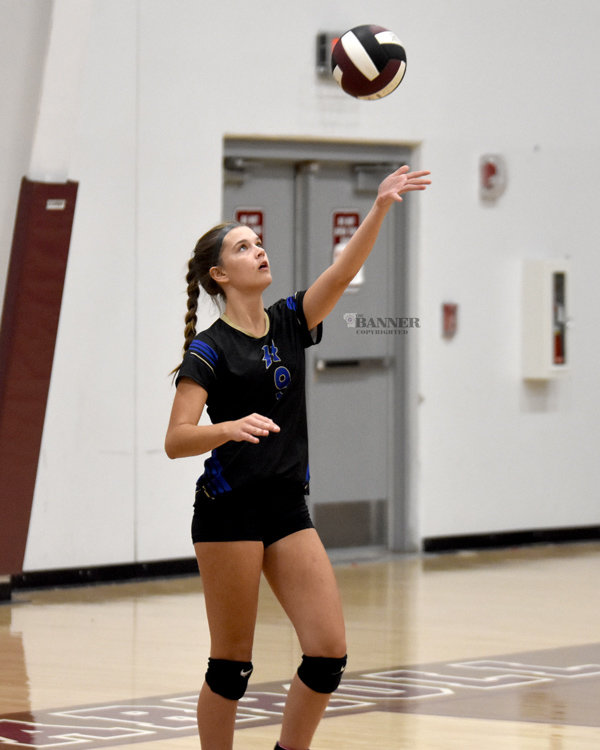 Huntingdon’s Reese Bradley serving to the Lady War Eagles during a recent match.
Photo by Jim Potts/The Banner
Posted Tuesday, October 4, 2022 2:38 pm
Huntingdon teams are winding down the season to tournament time in the next few weeks for volleyball, soccer, and cross country.
Volleyball
As volleyball’s regular season winds down to tournament time, Huntingdon wrapped up a three-game string of road games at West Carroll on Tuesday, September 27. The previous trips were to McEwen on Saturday, September 24 and to Fulton City on Monday, September 26.
Huntingdon and West Carroll JV squads played first with the Fillies winning both games. The varsity squads played best three out of five matches with the Fillies winning three straight games to earn the victory. In game one, the Fillies took an early 12-6 lead which opened to a 20-9 score before finishing the game with a 25-11 win. Game two saw the Fillies jump out to a commanding 11-3 lead before winning again 25-11. The Fillies finished the match with a 25-14 game three win earning the victory. They traveled to Madison and were beaten 3-0.
The Volleyball District Tournament will be underway at press time and will be updated on our website.
Cross Country
The Cross Country team has had two good outings at Covington and Trinity Christian Academy with Colton King, Shawn Simpson and Quinn Kelley medaling at Covington. King won the TCA Invitational while Simpson finished 13th in the competition. Their next contest will be Tuesday, October 4 at Obion High School. After Fall Break, they have one last regular season meet at Westview on Tuesday, October 18 before competing in the Regional Meet on Tuesday, October 25, also at Westview.
Soccer
The Fillies Soccer team is in the midst of four road games to finish the regular season. They defeated McEwen 4-1 on Thursday, September 22 and won 7-2 at Wayne County on Tuesday, September 27. Kyleigh scored four goals while Kailey Lord scored two goals. Goalie Ashlyn Rich recorded 7 saves during the contest. Huntingdon traveled to Crockett County on Thursday, September 29, losing a close 1-0 contest.
They will wrap up the season at Westview on Thursday, October 6 with the District Tournament starting on Tuesday, October 11, hosting Trenton.