DYER (October 1) — After losing in week one to McKenzie, the Huntingdon Mustangs have wreaked havoc against their opponents. Friday night, Huntingdon traveled to Dyer picking up their sixth consecutive win on the season. After four quarters of play and a running clock, Huntingdon easily defeated the Gibson County Pioneers 49-8. 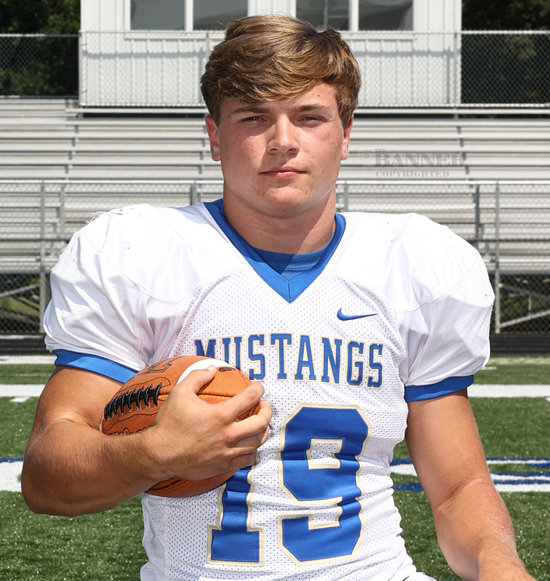 DYER (October 1) — After losing in week one to McKenzie, the Huntingdon Mustangs have wreaked havoc against their opponents. Friday night, Huntingdon traveled to Dyer picking up their sixth consecutive win on the season. After four quarters of play and a running clock, Huntingdon easily defeated the Gibson County Pioneers 49-8.

Defensively, the Mustangs held the Pioneers to minimal yards allowing only seven first downs. Landon Gordon lead Huntingdon in tackles with 11; while Wood followed with 10. The Mustangs accumulated four sacks on the night; Elijah Flowers(2), Wood (1) and C.J. Pelonero (1).

Huntingdon won the coin toss and deferred to the second half. Pioneer tailback Colton Lumpkin was able to move the ball down the field before the opening possession stalled. Senior quarterback John Phillips punted for Gibson County on fourth down, but Huntingdon fumbled the return. The Pioneers recovered and took over on the Mustang 35-yard line.

With a fresh set of down, Gibson County picked up a big first down on an end-around from tight end Ethan Turner. On third-and-eight, Lumpkin crossed the goal line from 17 yards out on the counter trap. Anthony Smith picked up the two-point conversion with 6:28 on the clock in the first quarter.

Huntingdon quickly tied the game at 8-8 with 3:26 to play in the first. Wood picked up his first TD of the night from 36 yards out. Hutcherson picked up the two-point conversion.

After a Pioneer three-and-out, the Mustangs scored for the second time as Hutcherson broke free for a 70-yard run. Hunter Britt’s extra-point was good as the Mustangs took the lead 15-8.

Gibson County was forced to punt and Huntingdon came away with excellent field position. Working from the Pioneer 40-yard line, the Mustangs moved closer to the goal line. Hutcherson scored on first-and-goal from the five with 8:12 to play in the opening half. Britt’s extra-point was good putting Huntingdon up 22-8.

A Pioneer three-and-out put the Mustangs on another scoring drive. In two plays, Huntingdon crossed the goal line. This touchdown came by way of Wood from 38 yards out. Britt tacked on the PAT increasing the Mustang lead 29-8.

Under pressure to score before the half, Gibson County worked the ball to midfield. On fourth-and-two, the offense stayed on the field and turned the ball over on downs.

One first-and-ten from the Pioneer 43-yard line, Gray Eubanks’ pass to Blane Fields resulted in Huntingdon’s fifth touchdown of the night. The extra-point was ruled no good as the Mustangs led 35-8 at the half.

The third quarter opened with another Huntingdon touchdown. The Pioneers looked to catch the Mustangs flat-footed with a midfield squib kick. Blake Reeves fielded the ball and turned up field 60 yards for the Huntingdon touchdown. Hutcherson picked up the two-point conversion inducing the mercy rule for a running clock with a score of 43-8.

The final points in the game came at the 1:26 mark of the third quarter. As the Mustangs began making substitutions, Gordon came in at running back along with Ashton Hutcherson. The duo moved the ball down field after six plays, Gordon crossed the goal line on second-and-goal from the Pioneer five-yard line. The extra-point kick was ruled no good as Huntingdon led 49-8.

Next Friday, Huntingdon makes the trek to Weakley County to take on the Westview Chargers (6-1) in Region 7-2A play. Game time is 7 p.m.