Football playoff time is here again and we have three local teams participating starting this week including McKenzie, Huntingdon, and West Carroll. For the fans supporting these teams, admission will be either $8 if you go through GoFan.com or $10 at the gate. The GoFan link can be found on the TSSAA Playoff Headquarters website. All games will start at 7 pm unless otherwise noted. 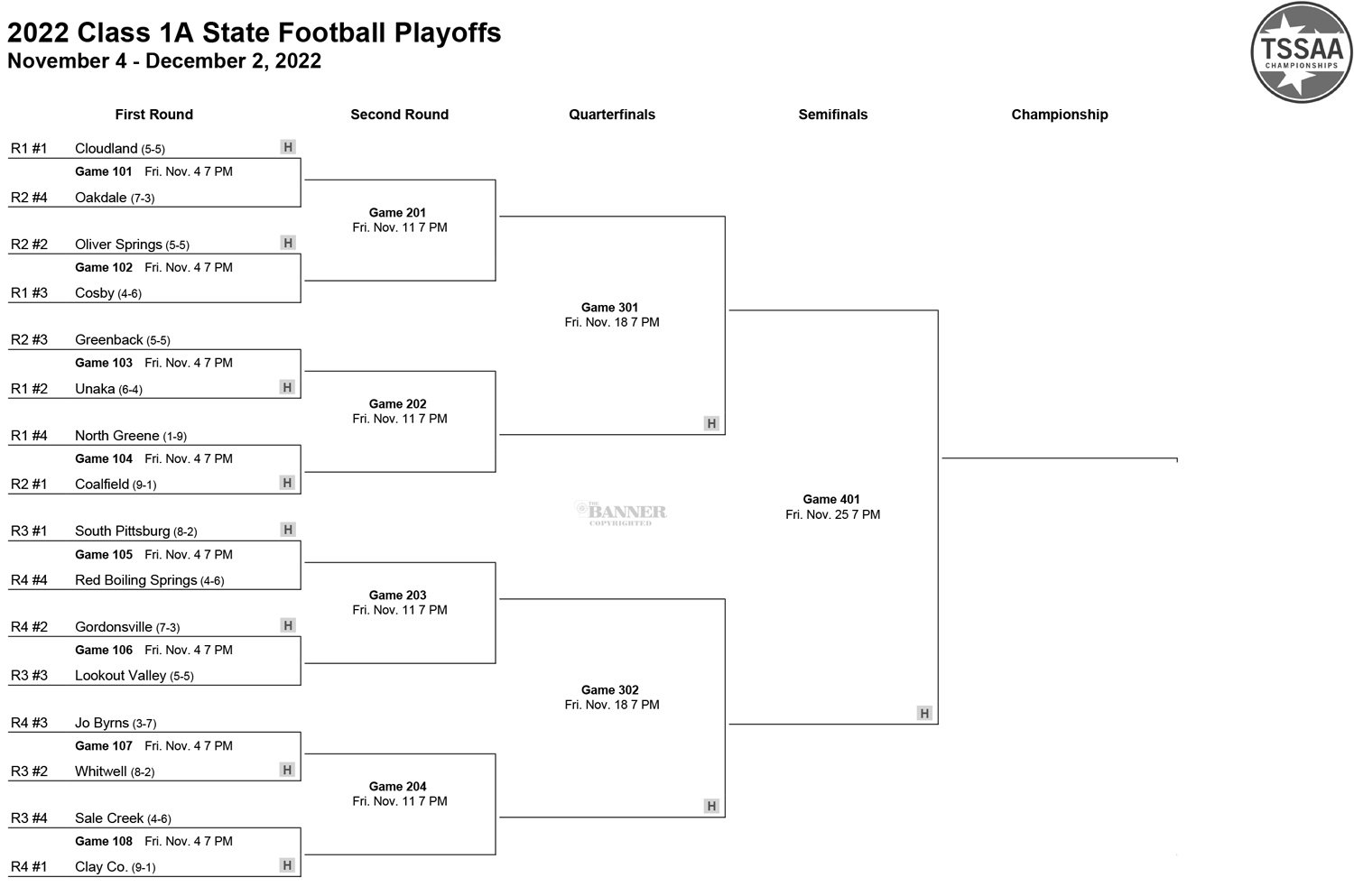 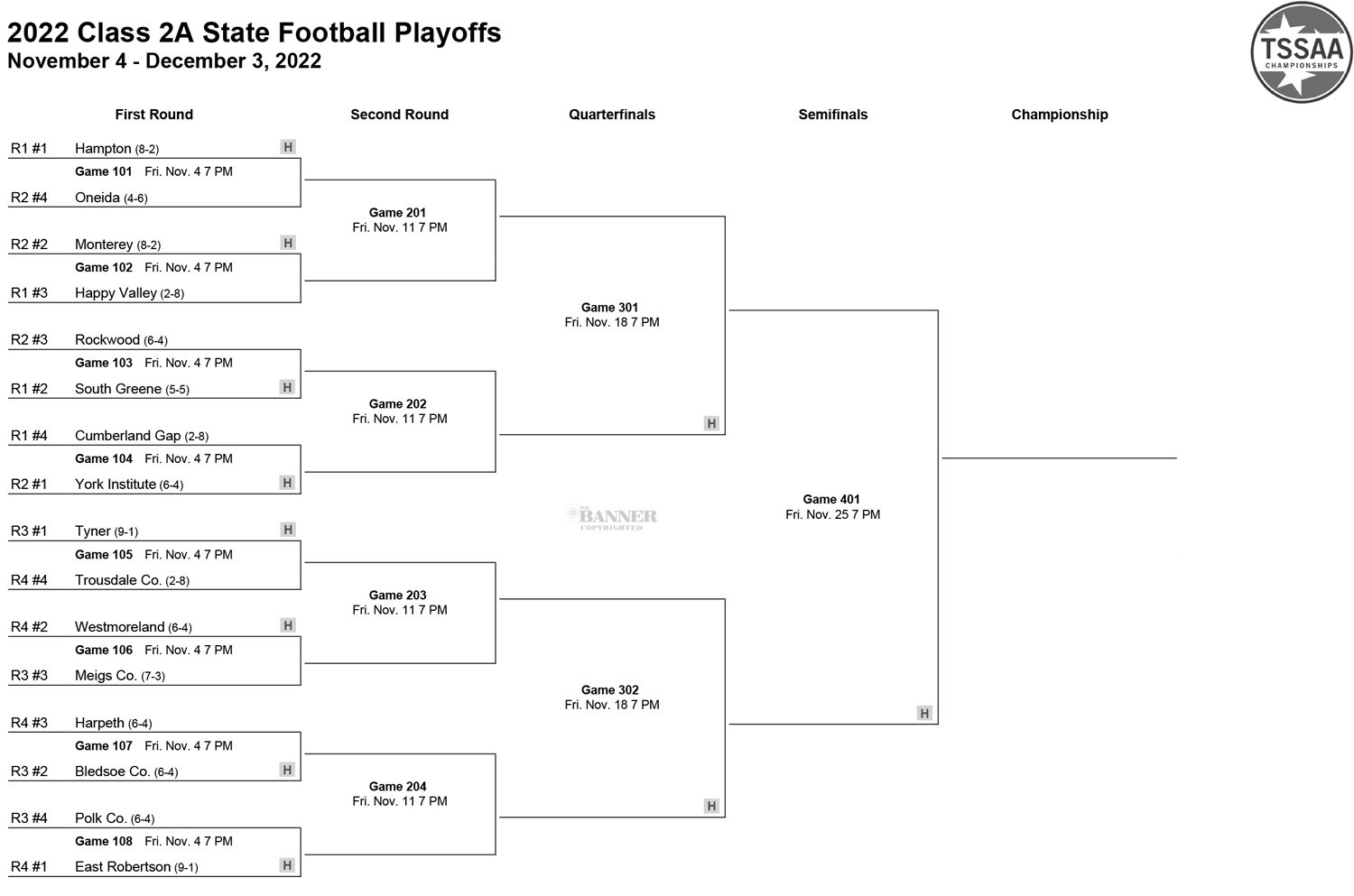 Previous Next
Posted Tuesday, November 1, 2022 5:00 pm
By Jim Potts
jpotts@mckenziebanner.com
Football playoff time is here again and we have three local teams participating starting this week including McKenzie, Huntingdon, and West Carroll. For the fans supporting these teams, admission will be either $8 if you go through GoFan.com or $10 at the gate. The GoFan link can be found on the TSSAA Playoff Headquarters website. All games will start at 7 pm unless otherwise noted.
McKENZIE
The Rebels are back in the playoffs again after running the table on their regular season schedule 10-0. Only two of those games can be considered close contests. They won Region 6A and will host the first three games at home. The ‘second season’ starts this week against Wayne County (6-4) at home. Wayne County finished fourth in Region 5A.
The second round will have the Rebels hosting either Moore County (10-0) or a rematch with McEwen (6-4) on November 11. A win would advance the Rebels to a likely quarterfinal rematch with Fayetteville unless Dresden pulls the upset win. If that happens, there will be a rematch with the Lions to move on to the semifinal round.
Several possibilities could take place in the semifinals. The likely one is a semifinal rematch with Trenton (8-2) at Trenton, but there are two other teams in that part of the bracket that could have a say in the results. Lake County (7-3) and Memphis Arts and Sciences (MASE 10-0) are capable of making noise in the playoffs. The Rebels will be on the road in the semifinal round either way, so it could be either at Trenton, Tiptonville, or Memphis.
HUNTINGDON
The Mustangs are back in the playoffs finishing second in Region 7AA thanks to their big win at Union City. They will play host to Memphis Mitchell (6-4) in the first round at Paul Ward Stadium. A win will likely send them on the road to Memphis Fairley (9-0) for round two unless Camden (4-6) pulls a big upset. If the Mustangs win round two, they would come back home for a quarterfinal game against either Freedom Prep (8-2) or potential rematches against Westview (8-2) or Union City (8-2).
If the Mustangs were to earn their way to the semifinals, it would be at Huntingdon against either Mount Pleasant (8-1), Riverside (8-2), Richland (8-2), or Lewis County (9-1).
WEST CARROLL
The War Eagles earned their way into the playoffs again but will be on the road from the start. They have a tough road traveling to undefeated Memphis Arts and Sciences (MASE) for round one. Should they pull the upset, they will face either Lake County or Memphis Middle College in round two. The road won’t get any better in rounds three or four except that West Carroll would host opponents in rounds three and four.