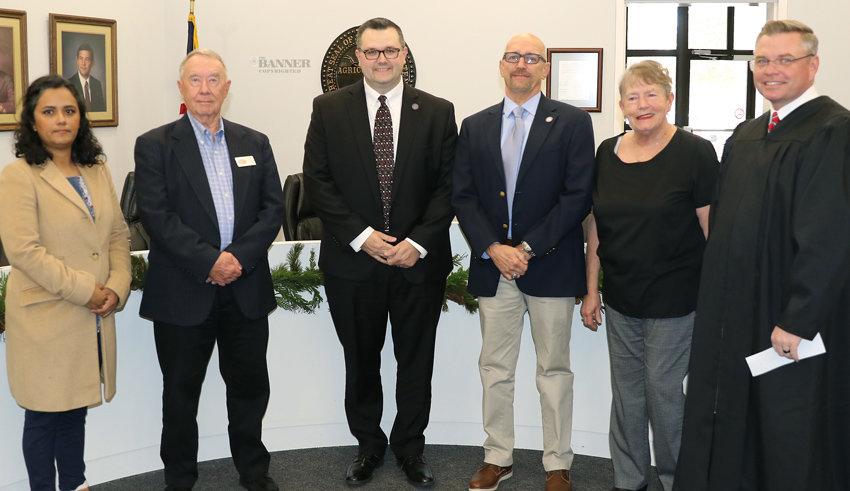 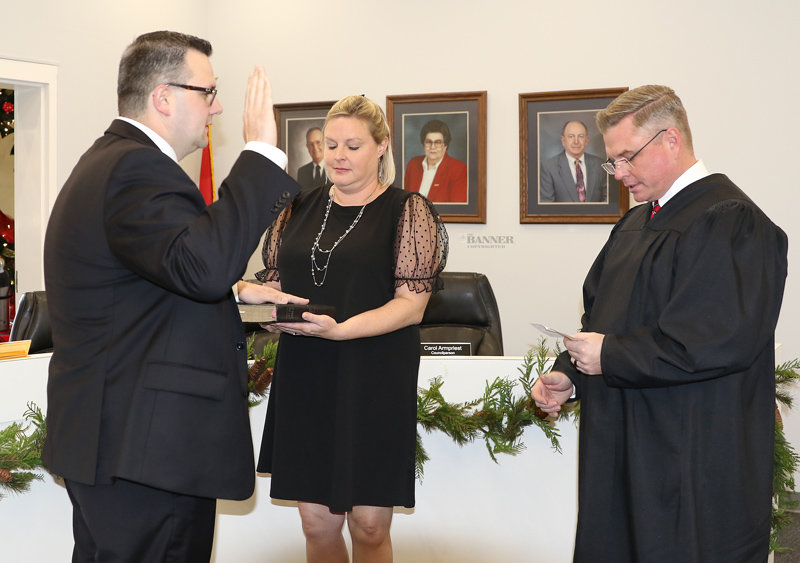 Judge Michael King administers the oath of office to newly elected Mayor Ryan Griffin. Lisa Griffin holds the Bible for her husband to take the oath.
Previous Next
Posted Tuesday, November 29, 2022 5:03 pm
McKENZIE (November 29, 2022)  — McKenzie Mayor Ryan Griffin  and recently elected councilpersons, Tom Alexander and Carol  Armpriest, and re-elected Josephina Batton and Bobby Young were administered the oath of office on November 29. They will join councilmen Charles Pruneau and Jessie Townes to comprise the full council.
General Sessions Judge Michael King administered the oath of office - first to Griffin, followed by the council.
The Council Room at City Hall was filled with well-wishers and family members.
“My goal is to continue to move McKenzie forward with efficiency and effectiveness,” said Griffin. He plans to use his experience in information technology and marketing to build an interactive website that is user friendly and emphasizes McKenzie and its great public schools, Bethel University and Tennessee College of Applied Technology.
On the branding side, he wants to develop a new city logo and implement a digital marketing campaign. The campaigns, along with the downtown murals on buildings, will honor the past of McKenzie while emphasizing the progressive nature of the city.
In the Parks and Recreation Department, he wants to improve City Park and Mulberry Park. One business entity is interested in helping with improved fencing at City Park, said Griffin. He also noted the neighbors of Mulberry Park want more policing and security cameras in the area. Griffin said he will seek grants to further improve the parks.
The city has recently acquired grants for the Water and Sewer Department. Griffin said he wants to better determine what are the next steps in improving the water and sewer departments.
Street paving is an issue. Griffin said the Tennessee Department of Transportation estimates a cost of $300,000 to pave one mile of streets. He said he will research ways to reallocate parts of the budget to allocate more for paving.
He does not expect to change any of the department supervisors and looks forward to working with them to improve the city.
Recently appointed Police Chief Ryan White has made tremendous progress in improving the department. Soon the department will be fully staffed with 17 officers. That will allow a shift sergeant and two patrolmen on each shift.
He said he is eager to work with the McKenzie Chamber of Commerce and the McKenzie Industrial Board to promote the city and attract additional jobs to the town.