McKENZIE — For Joe McGuigan, graduating with his Bachelor of Arts in History on December 10 from Bethel University was just the next chapter in an already full and wildly diverse life. 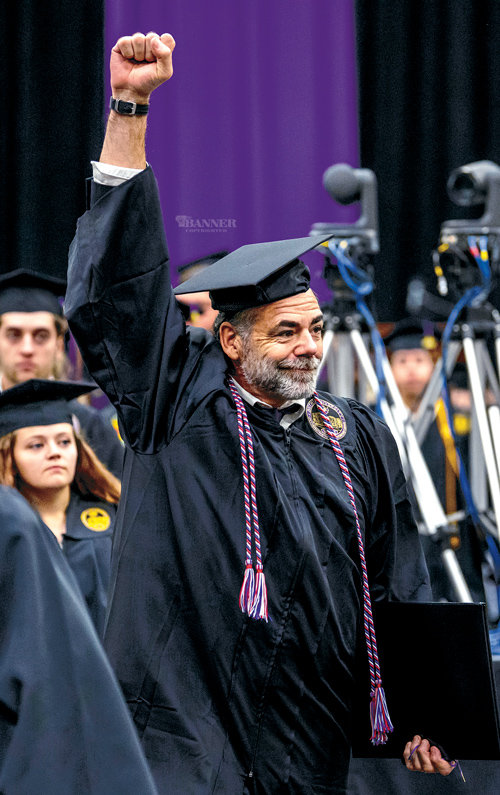 Joe McGuigan celebrates his graduation from Bethel University.
Posted Tuesday, January 3, 2023 3:57 pm
McKENZIE — For Joe McGuigan, graduating with his Bachelor of Arts in History on December 10 from Bethel University was just the next chapter in an already full and wildly diverse life.
After graduating from high school in 1984, McGuigan immediately joined the U.S. Marine Corps. Serving in the military was a family tradition, with his older brothers enlisting before him. After serving for 23 years, he spent seven years as a civilian contractor before completely shifting to a new phase of his career, massage therapy.
“I was looking for a way to ground myself after retiring from the military,” McGuigan said. While living in Hawaii, he visited the local Healing Arts College. There, he noticed that every student he came in contact with was always in a good mood. “I knew that there must be something to [massage therapy], so I enrolled in the program,” he stated. McGuigan worked as an LMT in Huntingdon for four years until deciding to go back to school.
McGuigan, originally from Pennsylvania, made his way to west Tennessee through what he deemed was God’s answer to a prayer he made during a particularly rough battle while stationed in Afghanistan. “I just prayed for peace, and for a long time after that day, I forgot all about that prayer,” he said. Several years later, he was visiting Tennessee for a family wedding and began driving. He stated he remembered thinking that he could enjoy a quieter life. “Being able to have the land to garden and let the dogs run was very important to me.”
McGuigan states that a large reason he chose Bethel was due to its focus on Christian life. “My favorite memory from Bethel was my first time going to chapel services,” he said. Being raised in the Catholic faith, McGuigan said he found freedom in the way spirituality was presented at Bethel and came to Christ during his time as a student. “...[Christianity] here felt like freedom,” he said.
While many non-traditional students choose to earn their degree through an online program, McGuigan wanted the full college experience and enrolled as an in-person student three-and-a-half years ago. He was specifically looking for the engagement provided by being face-to-face with his professors and peers.
One way he became involved outside the classroom was participating in the Physicians Assistant Program’s medical mission trips to Belize. Throughout the year, he collects and repairs old watches in preparation for the annual February trip. “A watch is a big deal for many villagers due to the lack of electricity and cell phones,” he said. “It’s amazing what a little thing like knowing the time will do for a village.” He stated that he will be going back in the spring as a community member.
Now that he has finished his degree, McGuigan’s plans include becoming a history teacher at a local high school, and he will begin substitute teaching in the spring semester. Along with his teaching goals, he plans to continue with his farm, where he grows corn and soybeans, and his large hobby garden.
McGuigan has touched many lives during his time at Bethel. “I always tell [my fellow students], you must never quit or give up, because you will never get this opportunity. So finish!”
Bethel University held its summer and fall 2022 graduation ceremony on December 10 in the Crisp Arena. Over 350 degrees were conferred during the ceremony, and the graduates enter into a strong alumni community, with over 16,000 active alumni around the world.