McKenzie Defeats Wayne County in First Round of Playoff

McKenzie Defeats Wayne County in First Round of Playoff 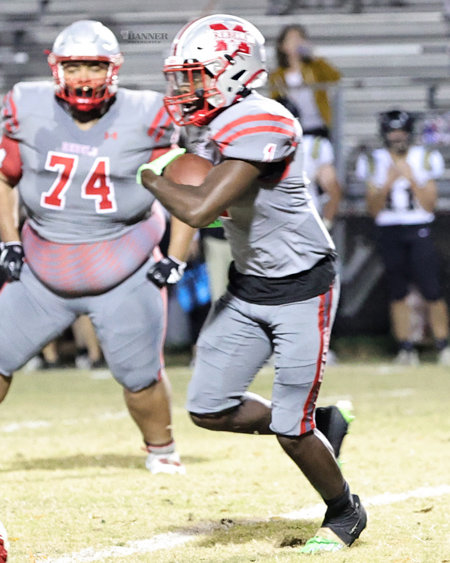 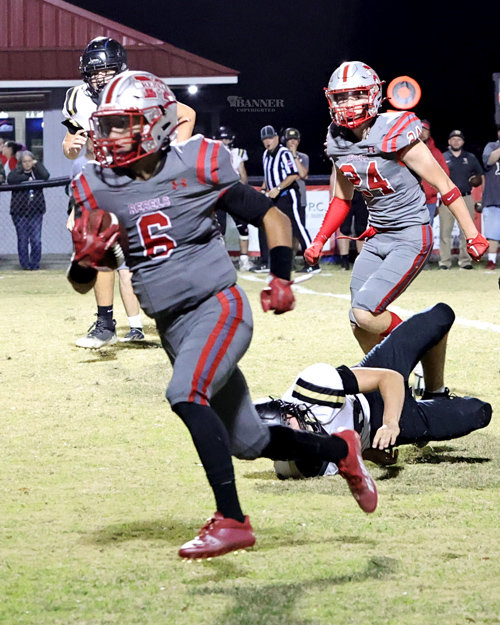 Tim Arline makes a 28-yard run for a TD. 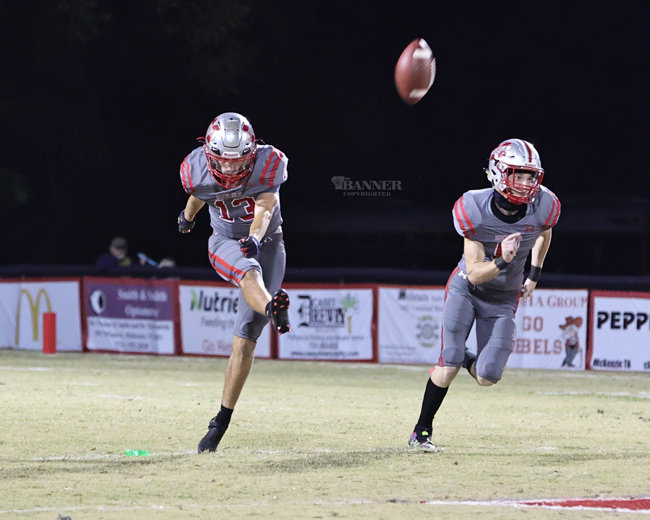 Stafford Roditis had nine kickoffs in the game against Wayne County.
Previous Next
Posted Tuesday, November 8, 2022 12:58 pm
McKenzie (November 4) — McKenzie Rebels defeated Wayne County 63-0 in the first round of the Class 1A football playoffs at Rebel Stadium on November 4. Next up is Moore County (9-1), Region 5 at Rebel Stadium on Friday, November 11, Veterans Day, 7 p.m.
Per TSSAA, admission is $10 cash at the gate or $8 in advance on https://gofan.co/app/events/773772?schoolId=TN12990
In the Wayne County contest, the Rebels had five first quarter touchdowns. Marquez Taylor scored on a 38-yard pass from Jackson Cassidy. The second was by QB J. Cassidy on a 45-yard run. M. Taylor added the third on a 1-yard run followed by another on a 14-yard run and then a 53-yard pass from Cassidy to Taylor.
There was no scoring in the second quarter.
In the third quarter,, Rashad McCreary had a 1 yard run for a TD,
Taylor had a one-yard run for a TD. In the final quarter, Etijay Tharpe scored on a 74-yard run, and Tim Arline scored on a 28-yard run. Kicker Zach Aird was perfect with eight point-after-touchdown points.
McKenzie had 181 passing yards by Cassidy, 162 yards rushing by Taylor, and 138 yards receiving by Taylor.
McKenzie ran 36 plays for 516 yards, had 181 passing yards, 335 rushing yards including 162 by Taylor, 74 by Tharpe, 45 by Jackson Cassidy, 17 by McCreary, and 7 by Brady Brewer.
Wayne County completed two of six passes for 15 yards and 1 interception.
MHS tackles included: Drew Chappel for five tackles and one assist; David Cheney with 4 tackles and 1 assist; Jackson Cassidy with 3 tackles; McCreary with 3 tackles; Landon Brown with 3 tackles; Ace Fisher with 3 tackles; Zach Aird with 1. E. Tharpe with 1; Camden Allsion with 1 tackle with one assist; Daniel Latimer with 1 tackle and 1 assist; and Zay Webber with 1 tackle.
Kicker Stafford Roditis had 9 kickoffs for 490 total yards and Z. Aird had 1 kickoff for 60 yards and a touchback.