McKENZIE — Huntingdon Middle and McKenzie Middle had their first meeting on the hardwood Thursday, October 27 at McKenzie with the Lady Rebels and Mustangs winning their games. 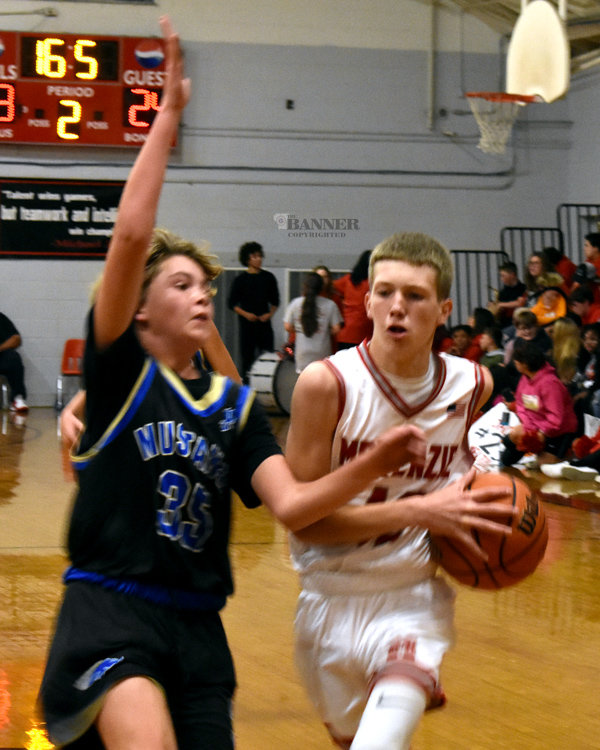 Avery Brown (42) drives to the basket guarded by Greyson Anderson (35). 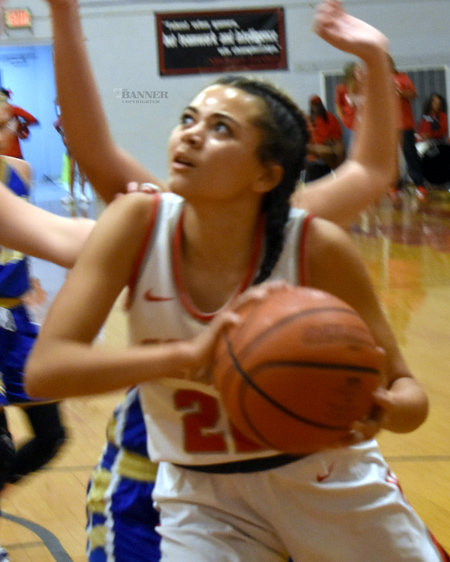 Lady Rebel Madeline Gottshall (22) gets ready to take a shot. 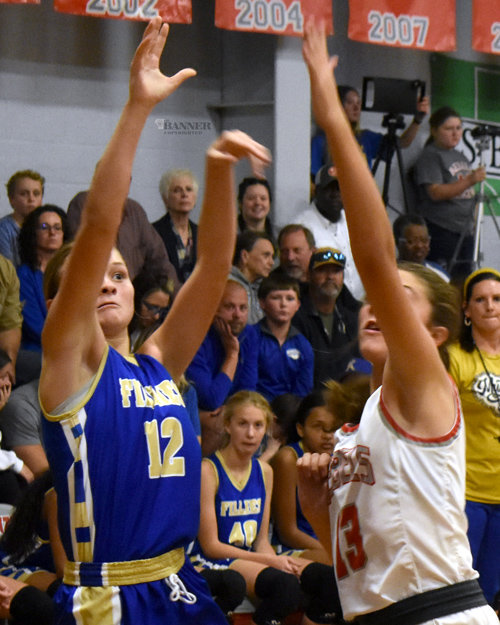 Huntingdon’s Knox Bennett launches a three-pointer against McKenzie.
Previous Next
Posted Tuesday, November 1, 2022 2:43 pm
By Jim Potts
jpotts@mckenziebanner.com
McKENZIE — Huntingdon Middle and McKenzie Middle had their first meeting on the hardwood Thursday, October 27 at McKenzie with the Lady Rebels and Mustangs winning their games.
The Lady Rebels took a 7-2 lead in the first period before the Fillies got hot with both teams battling to a 14-14 tie at halftime. It remained close in the third period with the difference being Huntingdon took over the lead 24-21 heading into the final period.
The final period was a wild one with the Lady Rebels cutting the lead to 31-27 with 1:30 left to play. Lady Rebel Jaycee Stafford hit a layup followed by a pair of free throws to tie the game 31-31 with 42 seconds left to play. Stafford was fouled again and delivered another pair of free throws giving McKenzie a 33-31 lead with 27 seconds left. Next trip down the floor, Stafford drew another foul and hit one of two attempts making it a 34-31 contest. Huntingdon went to the line missing both attempts. McKenzie went back to the line with .4 seconds to play hitting both free throws to seal the win 36-31.
McKenzie’s Jaycee Stafford led all scorers with 21 points followed by Madeline Gottshall with 10 points. Addison Milam had four points while Braylon Auvenshine chipped in a point for the Lady Rebels.
The Fillies were led by Camdyn Sellers with 10 points while Tatum Rich and Wylie Kee followed with seven and six points respectively. Knox Bennett added four points for the Fillies. Grier Bartholomew and Emalynn Maness chipped in two points each.
In the boy’s contest, the Mustangs opened a quick 6-0 start on the way to a 19-5 first period effort against the Rebels. McKenzie made up a little ground in the second period trailing 24-14 at halftime. Huntingdon was hot in the third period outscoring McKenzie 21-9 to lead 45-23 heading into the final period. The final period was low scoring with the Mustangs adding eight points and the Rebels adding six points to reach a 53-29 final score.
Huntingdon’s Kenton Smith led all scorers with 20 points followed by Bryson Whiteside with 12 points. Greyson Anderson and Lucas Smith added seven points and five points respectively. Zayden Connelly, Hayes Eubanks, and Colt Luther had three points each for the Mustangs.
Nolan Fawcett and Jacobi Melton led the Rebels with 10 points and eight points respectively. Cole Brown and Avery Brown added five points and four points. Lelan Gordon and Kason Brown chipped in a point each for the Rebels.
McKenzie Middle and Huntingdon Middle will be back in action Tuesday, November 1. McKenzie plays host to West Carroll while Huntingdon hosts Camden Middle.