McKENZIE (January 12) — After December’s wintery mix, the City of McKenzie has agreed to purchase a snow plow implement to help with the flow of traffic through downtown. 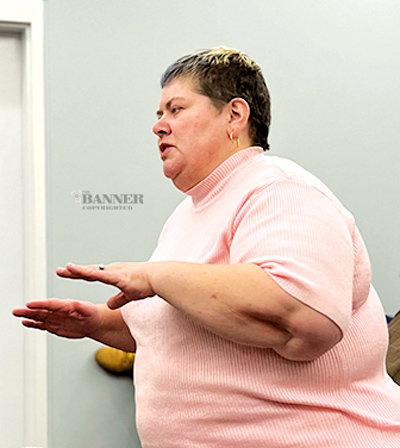 Veronica Davis speaks to the council about her neighbor’s dogs and her fears for safety.
Posted Tuesday, January 17, 2023 5:00 pm
McKENZIE (January 12) — After December’s wintery mix, the City of McKenzie has agreed to purchase a snow plow implement to help with the flow of traffic through downtown. The $10,000 plow will attach to one of the Street Department’s larger trucks. While all residential streets will not be able to be cleared, Street Department Supervisor Johnny Mercer stated the plow would help in the downtown area, especially along Main Street, Forrest Avenue and University Drive.
A point of tension during the meeting was the discussion of whether or not to donate to the high school regarding the football state championship signage. After some back and forth, it was determined the City of McKenzie would make a donation of $1,000 matching the funds previously donated to the basketball team’s championship sign. The question arose regarding the requested size of the sign versus the established size used for other championships. Mayor Ryan Griffin went on record to state that he was against the motion. The council voted unanimously in favor of the donation and chose not to dictate the size of the sign.
Under financial matters, the Police Department purchased a 2013 Chevy Tahoe. The vehicle was purchased after one of the department cars was totaled during the ice storm. Insurance paid $15,000 on the totaled 2010 Tahoe and the department’s “Safe Street Funds” the difference of $11,000 was paid for the 2013 vehicle.
Veronica Davis of Alabama Street in McKenzie spoke during citizens’ input. Davis made a passionate plea to the Mayor and Council to do something about her neighbor’s dogs. She referenced how the neighbor had previously been cited under the “Vicious Dog” ordinance and his dogs were destroyed. According to Davis, the neighbor now has new dogs that she claims to be dangerous and fears for the safety of the neighborhood.
Director Mercer stated the owner in question has kennels and on the last inspection they were up to code. Davis commented on the state of disrepair of the retaining fence but was informed the fence does not fall under the parameters of the ordinance. Mercer did state he would check in on the owner to make sure everything was still up to code.
During council reports, Councilperson Josefina Batton asked for clarification on various happenings and events that have taken place in the city. Batton asked about the status of the rumored new Dollar General store coming to McKenzie. Mayor Griffin stated the plans failed to pass through the Planning Commission and the delivery of building materials was a mistake on behalf of an overzealous developer.
Batton then questioned the status of Christmas bonuses to city employees. City Clerk Jennifer Waldrup stated the council did not have to vote in December on the bonuses due to the fact the bonuses were included in the 2022-23 Fiscal Year Budget. Batton also questioned Waldrup on the sale of city furniture on Facebook and was informed the post had been removed.
Batton brought to the public’s attention that Mayor Griffin believes certain project files are missing, i.e., the City Park project with the Tennessee National Guard. No accusations were made in the meeting but Griffin stated he has spoken to the District Attorney’s Office. He added the City will implement a backup system in-house and a cloud-based to prevent the issue from happening in the future.
Lastly, Batton brought up the hazards of the crosswalk area near McKenzie Middle School stating she recently witnessed serious drive neglect. Students have been near hit in the crosswalk by motorists not paying close attention. Police Chief Ryan White stated that he has spoken multiple times to the Student Resource Officers (SROs) about the concerns expressed. He added that he would speak to the sheriff’s office again on the matter.
In department reports, the Street Department is continuing its brush and debris pickup. The Water Department is working on its annual Community Development Block Grant (CDBG) for sewer repairs. The Parks Department has removed and stored all Christmas decorations and cleaning up some of the landscaping within the City of McKenzie. The Codes Department is continuing its work on the condemnation of four local properties and hopes to be able to move forward in the next few weeks.
The next regular meeting of the McKenzie City Council is February 9 at 6 p.m.