GLEASON (January 12, 2023) — The last time the Gleason Lady Bulldogs and McKenzie Lady Rebels met last season was in the Class 1A state tournament in Murfreesboro on March 11, 2022, in the … 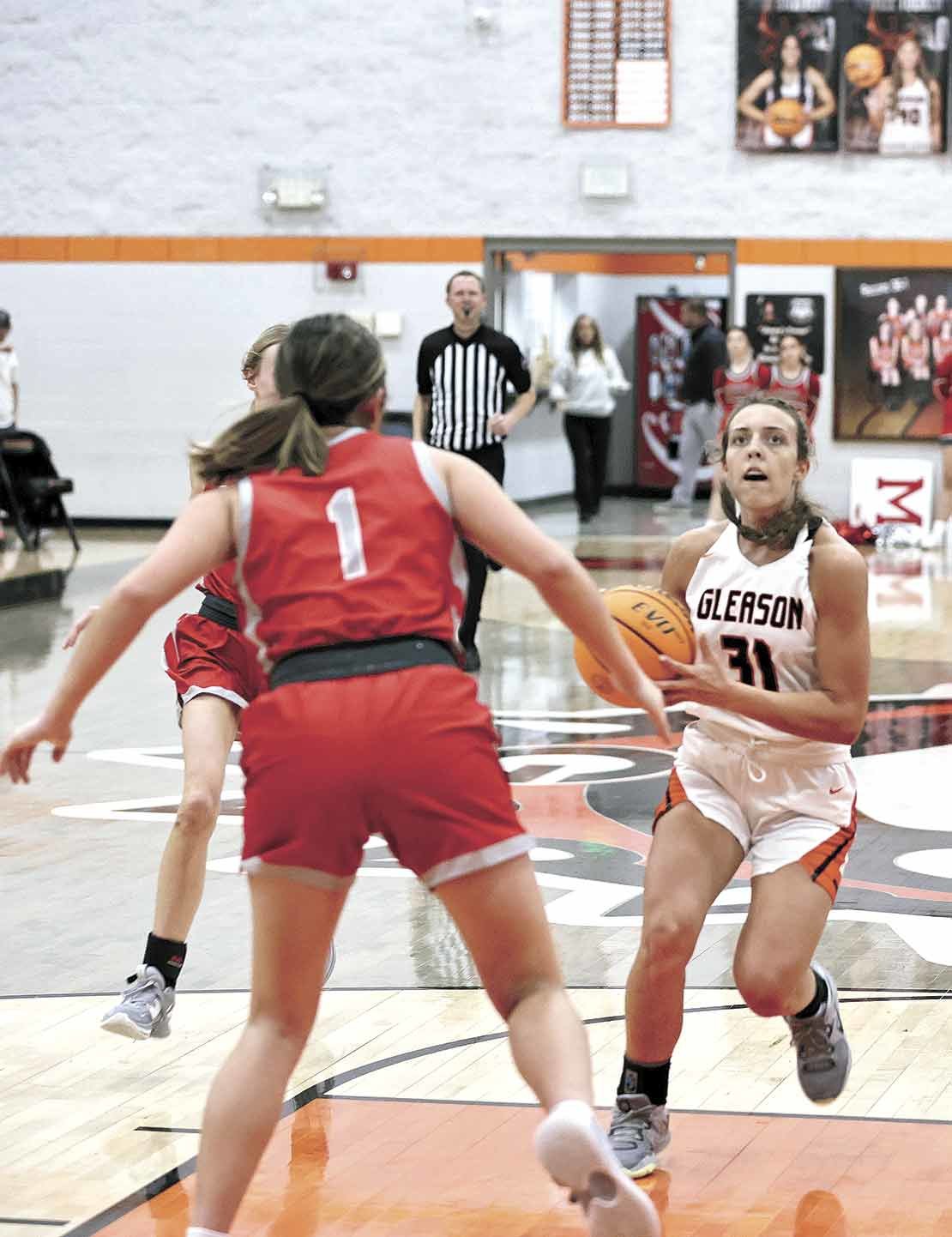 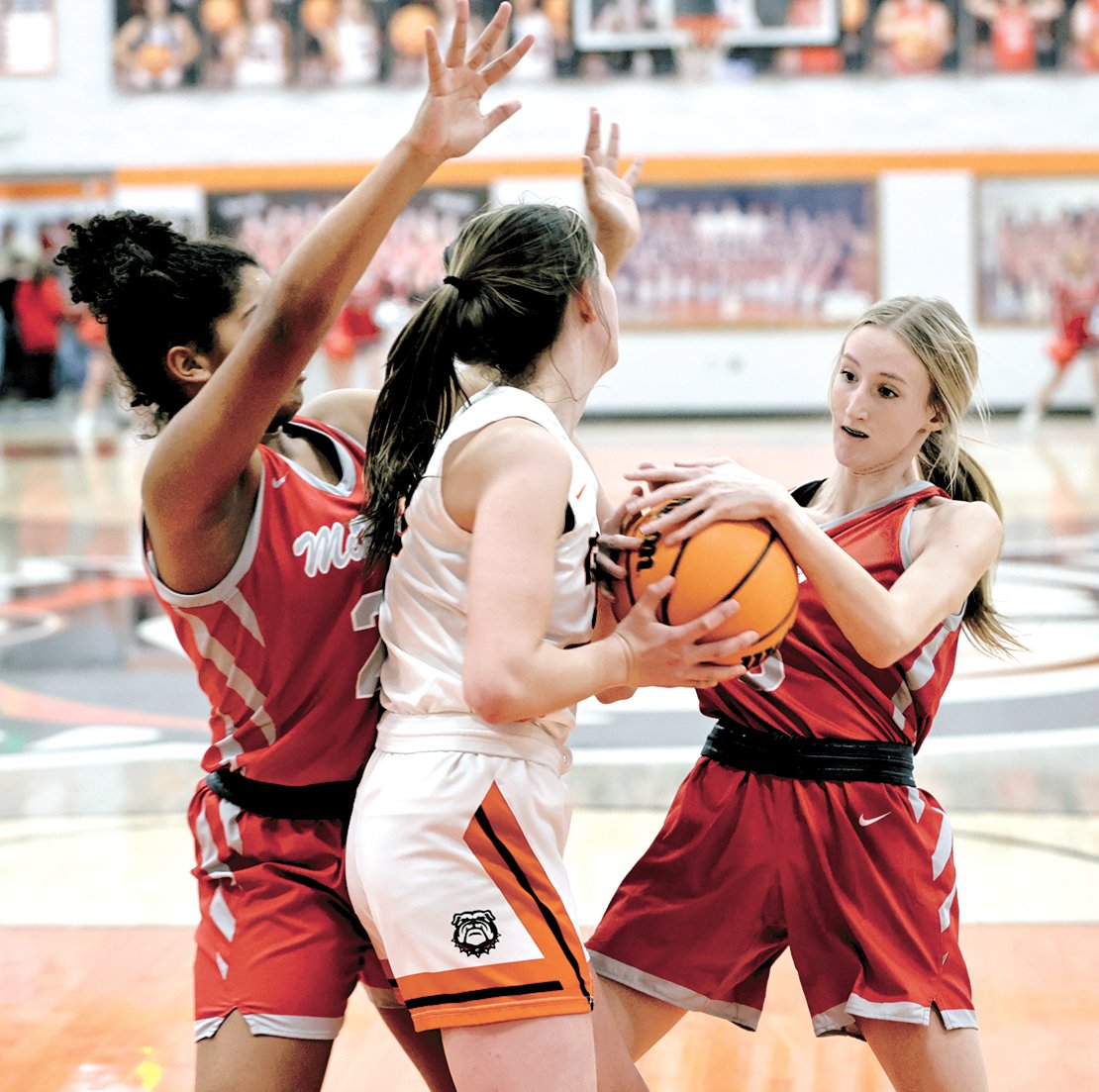 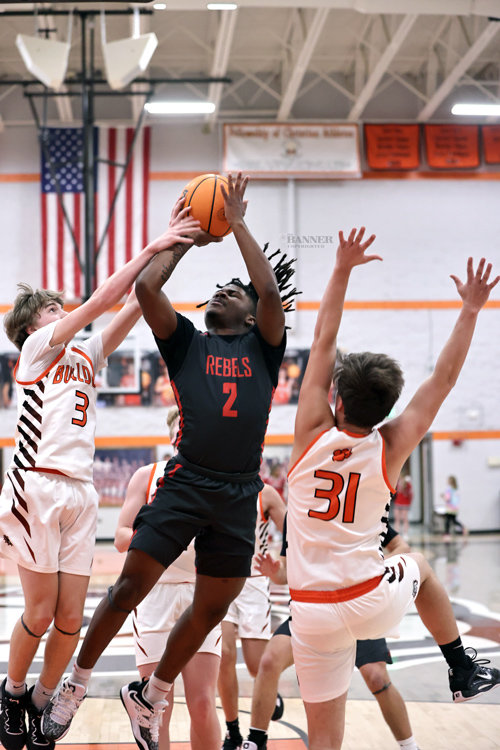 Zay Webber moves under the goal as Kade Sawyers and Kylan Borneman defends.
Previous Next
Posted Tuesday, January 17, 2023 8:07 am

GLEASON (January 12, 2023) — The last time the Gleason Lady Bulldogs and McKenzie Lady Rebels met last season was in the Class 1A state tournament in Murfreesboro on March 11, 2022, in the semi-final round. McKenzie won that back-and-forth contest by 58-46 over McKenzie’s closest neighboring city.
On January 12, it was McKenzie edging Gleason by a score of 53-41. The final score spread is not indicative of the tight score throughout the contest. McKenzie held a slim margin at the end of the first three quarters by scores of 13-12, 27-23, and 40-36. It was a 13-point surge in the fourth that secured a McKenzie victory.
McKenzie Lady Rebels (11-5 overall) were led in scoring by Kiley Reynolds with 17, followed by Briley Auvenshie with 12, Katie Chesser with 7, Sophie Pate with 6, MiKaela Reynolds with 5, Sarah Luci with 3 and Molly French with 3.
The team is coached by John Wilkins.
Gleason Lady Bulldogs were led by Autumn Mingle with 13, Ava Sawyers with 9, Kaylee Tucker with 9, Sophie Wilson with 8 and Maya Lamb with 2 for a total of 41.
The team is coached by Sean Stephenson.


McKenzie Rebels took an early lead over the Gleason Bulldogs. The Rebels led the entire contest. Gleason’s Drake Lehmkuhl was the lead scorer in the contest with 25 points on the evening. Younger players saw action for much of the fourth quarter.
McKenzie scored 31, 24, 13, and 10 in the respective quarters for 78 points total.
The Rebels were led by Bryson Steele with 17, Tate Surber with 16, Marquez Taylor with 14, Hayden Garrett with 11, Zay Webber with 6, Stafford Roditis with 5, and Carter Kee, Christopher Beck and Martez Teague each with 3. The team is coached by John Wilkins.
Gleason scored 14, 14, 16, and 11 in the respective quarters for 55 total points.
Drake Lehmkuhl led with 25 points. Kylan Borneman had 12, Kade Sawyers had 9, Kyzer Crochet had 4, Conner Cook had 3 and Gage Byington had 2.
The team is coached by Mike Riggs.