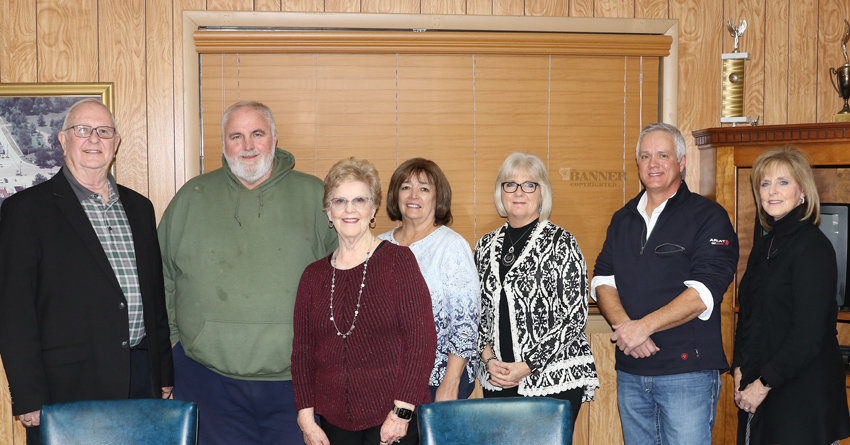 McLemoresville Mayor and Council (L to R): Mayor Phil Williams, Councilman Don Reed, City Clerk Barbara Younger, Councilwoman Angie Martin, Councilwoman Sharron Holland, Councilman Mike Presson and Councilwoman Lana Suite.
Posted Tuesday, January 17, 2023 5:00 pm
By Joel Washburn
washburn@mckenziebanner.com
McLEMORESVILLE (January 10) — Mayor Phil Williams was recently re-elected to a four-year term in McLemoresville. His tenure as mayor began in 1977 following a four-year term as councilman, which began in 1973. He has served the citizens of McLemoresville for fifty years.
Barbara Younger, the city clerk, has also served the city for fifty years, including 45 years as a councilwoman.
Councilwoman Angie Martin has served since 1985 and starts a new four-year term. Councilman Don Reed has served since 2002. Councilwoman Lana Suite has served four years and begins a new four-year term.
Councilman Mike Reed returns to the board after his recent election. He previously served a four-year term.
The new member is Sharron Holland, who begins her first four-year term.
During the January 10 meeting, the board had a busy agenda.
The board decided to seek bids for a new roof on City Hall after years of patching the roof.
The daily rental rate for the McLemoresville Activities Center (MAC) was increased from $50 to $75 to help cover increasing costs of operations.
Councilwoman Martin said the MAC needs a new door and new flooring.
Councilwoman Suite said Verizon Wireless has indicated the wireless provider will install a cell tower in the city.
Suite also said the paperwork was submitted in hopes of getting a grant to build a storm-safe facility at a cost of approximately $1 million. It would provide short-term safety for up to 295 persons and have a kitchen. It is proposed to be located next to City Hall and the city would pay five percent of the costs.
A three-percent increase price increase was approved for collection and waste disposal services by Republic Services. There will be no increase in the monthly fee of $15 for residents.