The McKenzie Golf Teams wrapped up their regular season with two road matches at Milan Country Club on Tuesday, August 30 and Thursday, September 8 at Stewart County while their last match was at Carroll Lake Golf Course against Huntingdon and South Fulton. The District Tournament got underway on Monday morning, September 19. 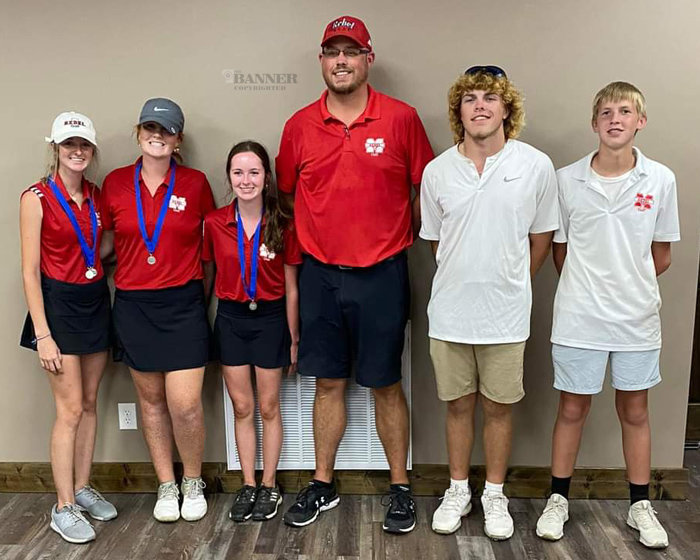 McKenzie golfers going to Regional Tournament at Dyersburg; Charli Weatherford, Payton Ognibene, Anna Weatherford, Coach Holt, Nolan Renfro and Caleb Burke.
Photo courtesy of McKenzie Golf Team
Posted Tuesday, September 27, 2022 1:50 pm
The McKenzie Golf Teams wrapped up their regular season with two road matches at Milan Country Club on Tuesday, August 30 and Thursday, September 8 at Stewart County while their last match was at Carroll Lake Golf Course against Huntingdon and South Fulton. The District Tournament got underway on Monday morning, September 19.
Milan, Gibson County
Seven girls and 23 boys from McKenzie, Milan and Gibson County teed up playing on soggy ground due to recent rains. The Lady Rebels won their match defeating Gibson County 103 to 114. Lady Rebel Charli Weatherford was the Low Medalist firing a 48 on the day. Milan didn’t field a Girls team.
The Rebels didn’t fare as well losing to both Gibson County and Milan. McKenzie fired a 195 while Gibson shot a 185 and Milan won with a 158. A Milan player was Low Medalist with a 36.
Stewart County
Thursday, September 8 was the last road trip of the regular season to Paris Landing Golf Course to face Stewart County’s Rebels. The Lady Rebels and Rebels lost to Stewart County with the Lady Rebels shooting a 106 to Stewart County’s 99. A Stewart County player placed Low Medalist with a 44. The Rebels fired a 191 to Stewart County’s 153 with a Stewart County player being Low Medalist with a 36.
Huntingdon, South Fulton
Senior Day took place on Monday, September 12 at Carroll Lake Golf Course for McKenzie’s final regular season game. Payton Ognibene and Nolan Renfro shot good scores for their final regular season match.
The Lady Rebels played well with Ognibene firing a 43 and a South Fulton placed Low Medalist with a 42. Nolan Renfro was Low Medalist for the match with a 43 during which the Rebels and Red Devils tied 189 each and defeated Huntingdon with 211.
District Tournament
McKenzie’s Golf Team had three girls and five boys representing at the District Tournament held at Persimmon Hills Golf Course in Sharon. The Lady Rebel golfers included Payton Ognibene, Anna Weatherford, and Charli Weatherford. The Rebel golfers included Nolan Renfro, Carter Kee, Xander Johnsey, Caleb Burke, and Hudson Wallace.
The Lady Rebel golfers finished second in the District Tournament with Union City winning the title. The Low Girls’ Medalist was from South Fulton firing an 80 for the tournament. In boys action, the Rebels finished fourth behind Westview, Union City, and South Fulton. However, two Rebel golfers individually qualified for the Region Tournament. Nolan Renfro and Caleb Burke turned in scores of 88 and 99 respectively. The Low Boys’ Medalist was from Westview and fired a 79 for the tournament. The Region Tournament will be underway on Monday, September 26 as the Banner is preparing to go to press. We will have scores on the Banner website when we get them and will have details in next week’s paper.