McKenzie Middle School basketball tipped off November hosting West Carroll Junior High on Tuesday, November 1. The Lady War Eagles drained a three-pointer to take an early lead and maintained a slim 1-2 point lead throughout the first period until McKenzie hit a basket taking an 11-10 lead just seconds before the end of the first period. 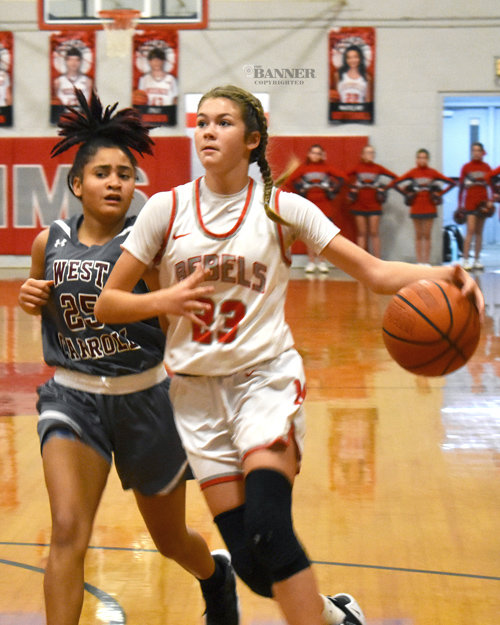 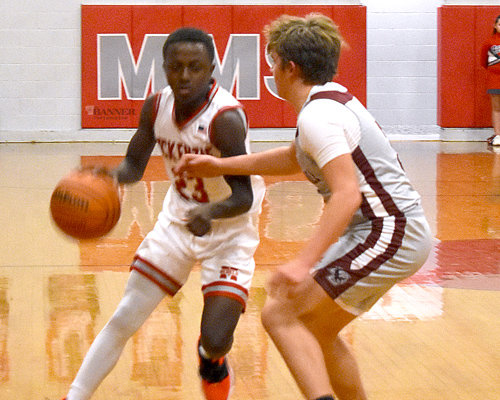 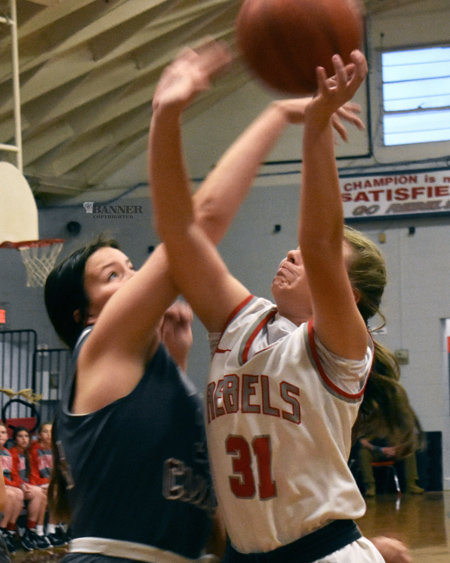 Aurora Johnson (31) fights for a rebound against the Lady War Eagles.
Photo by Jim Potts/The Banner
Previous Next
Posted Tuesday, November 8, 2022 12:47 pm
By Jim Potts
jpotts@mckenziebanner.com
McKenzie Middle School basketball tipped off November hosting West Carroll Junior High on Tuesday, November 1. The Lady War Eagles drained a three-pointer to take an early lead and maintained a slim 1-2 point lead throughout the first period until McKenzie hit a basket taking an 11-10 lead just seconds before the end of the first period.
Both teams swapped the lead until the Lady Rebels took a 16-12 advantage with 4:30 to go in the second period. McKenzie built the lead to 26-18 by the end of the first half.
The Lady Rebels came out hot in the early minutes of the third period outscoring West Carroll 7-2 to build their lead to 33-20. They scored 23 points in the period while holding the Lady War Eagles to 2 points leading 49-20 heading into the final period.
The final period had a running clock while both teams got younger players some playing time. McKenzie hit a pair of baskets while West Carroll got 3 points during the period for a 52-24 final score in favor of the Lady Rebels.
McKenzie’s Jaycee Stafford led all scorers with 25 points while Madeline Gottshall and Addison Milam followed with 10 points each. Aurora Johnson had four points, Kynadie Brown had three points, Avery Cantrell had two points, and Alleigh Britt chipped in a point for the Lady Rebels.
West Carroll was led by Grace Coleman with 10 points followed by Airyanna Metcalf with six points and Taylor Robinson with four points. Aubrey Hammett and Marissa Mueller chipped in two points each for the Lady War Eagles.
The Middle School Rebels came out with the sharp eye and stiff defense rolling up a 12-0 lead by the end of the opening frame. The second period wasn’t any different as the Rebels outgunned West Carroll 15-5 to lead 27-5 at halftime.
The third period was low scoring with McKenzie maintaining a comfortable 30-10 lead heading into the final period. The final period saw plenty of younger players for both teams get playing time with the Rebels adding five more points while West Carroll managed a basket for a 35-12 win for McKenzie.
Cole Brown and Jacobi Melton led the Rebels with 15 and 10 points respectively. Nolan Fawcett had five points while Avery Brown and Ean Gibson contributed three points and two points for the Rebels.