TRENTON — The Huntingdon Mustangs made the trip into Gibson County for a rematch with Trenton. Last year when Trenton came to Huntingdon, the Mustangs snapped their 44-game win streak in convincing fashion. 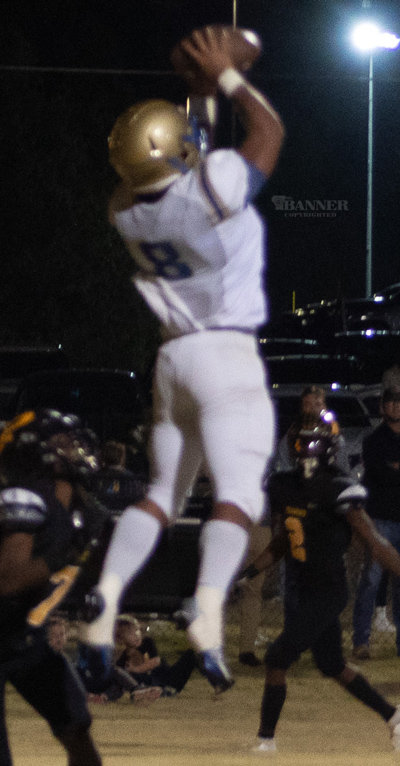 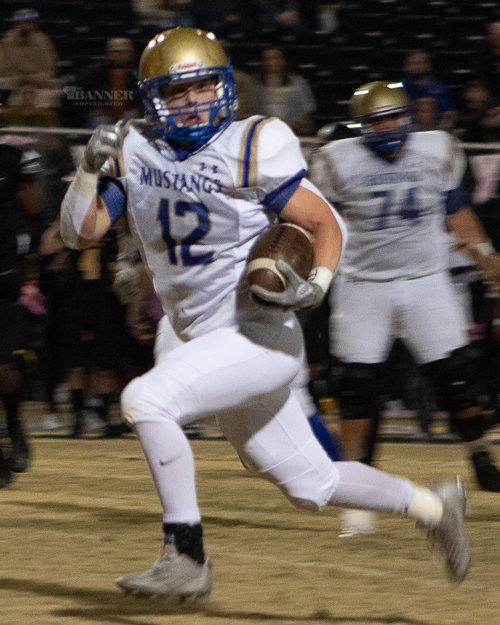 Ashton Hutcherson (12) runs for a Mustang touchdown against Trenton.
Previous Next
Posted Tuesday, October 25, 2022 1:43 pm
By Jim Potts
jpotts@mckenziebanner.com
TRENTON — The Huntingdon Mustangs made the trip into Gibson County for a rematch with Trenton. Last year when Trenton came to Huntingdon, the Mustangs snapped their 44-game win streak in convincing fashion. Both teams are headed for playoff berths this year with a little over a week to go until playoffs start. They played like it, too, with the Mustangs winning 41-28.
Huntingdon won the toss and elected to defer to the second half giving Trenton the ball first to start the game. The Tide wasted no time moving down field and scoring in five plays capped by a 28-yard touchdown run with the PAT good for a 7-0 Trenton lead with 9:43 left in the first quarter.
Huntingdon began their first possession after the ensuing kickoff at their own 31 and went three and out having to punt. It didn’t take long for the Mustangs to get the ball back due to an interception on first down giving Huntingdon possession at the Trenton 33. Three plays later Gray Eubanks put the Mustangs on the board with a 31-yard touchdown run with 6:28 left in the opening frame. The extra point was good for a 7-7 tie.
The Tide’s next possession was marred by penalties and punted on 4th and 34. They attempted a fake punt and nearly converted the first down but were stopped short by Huntingdon defenders. The Mustangs took over on their own 19 but weren’t able to get far before having to punt it back to Trenton on the final play of the first quarter.
The Mustang defense allowed very little on the Tide’s possession forcing them to punt again this time on a fourth and 13. They attempted another fake punt which failed leaving Huntingdon with good field position. One play later, Huntingdon took their first lead on a 37-yard Ashton Hutcherson touchdown. The extra point was no good, but the Mustangs had a 13-7 lead with 7:31 to go in the second quarter.
Trenton answered the Mustang score with a 30-yard touchdown pass on their ensuing possession. They regained the lead 14-13 on the extra point with 4:49 left until halftime. Huntingdon took the ball and put themselves in scoring position on a Gray Eubanks to Elijah Flowers pass covering 30 yards. Eubanks scored a 3-yard TD run with 1.6 seconds left in the half. The Mustangs connected on a 2-point conversion pass to retake the lead 21-14 at halftime.
Huntingdon took the second half kickoff and worked their way into Trenton territory before springing a 42-yard pass setting the Mustangs up with a first down on the Tide 1-yard line. Gray Eubanks scored on the next play with 8:55 left in the third quarter with the PAT blocked but leaving the Mustangs with a 27-14 lead.
The Mustangs got the ball back in good field position after Trenton threw incomplete passes on third and fourth down. They drove to near midfield and converted a fourth down play to keep the ball and scored several plays later on a Gray Eubanks to Elijah Flowers touchdown pass for 8 yards. Huntingdon ran and scored another 2-point conversion giving them a 35-14 lead near the end of the third quarter.
Trenton took their next possession into the fourth quarter and answered the Huntingdon score with a 3-yard touchdown run with the extra point good and 9:55 left in the fourth quarter and trailing 35-21. The Mustangs and Golden Tide swapped short possessions before Huntingdon got excellent field position in Tide territory after they failed to convert a fourth down play.
The Mustangs had the ball with five minutes to play and went five plays scoring their final touchdown with 3:13 left on a 31-yard touchdown run by Elijah Flowers. The PAT was no good, but Huntingdon was ahead 41-21. Trenton answered the score with a quick drive scoring on a 37-yard TD pass with the extra point good cutting Huntingdon’s lead to 41-28 with 1:23 left to play.
Huntingdon went into victory formation and took a knee twice to run the clock out on the victory. The Mustangs are currently 7-2 with a big region contest at Union City this week. A Mustang win would mean a second place finish in the region and host a first round playoff game. A loss would mean going to Memphis for the first round and likely second round of the playoffs.