Mustangs Lose Close One to Westview

This game was definitely a typical contest between Huntingdon and Westview Friday night, October 7, at Paul Ward Stadium.

Mustangs Lose Close One to Westview 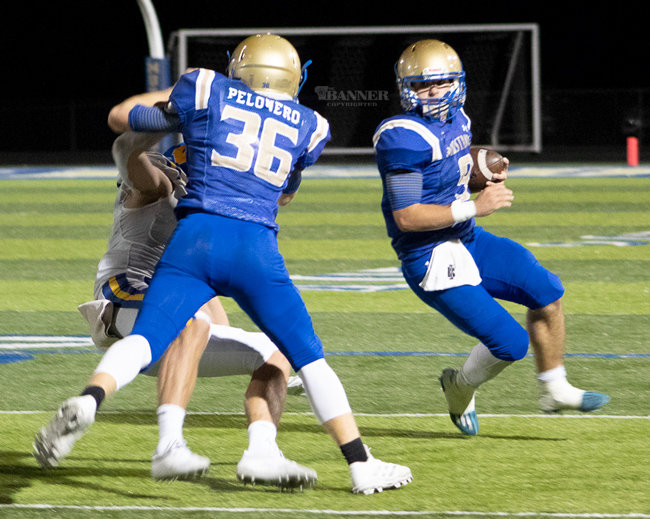 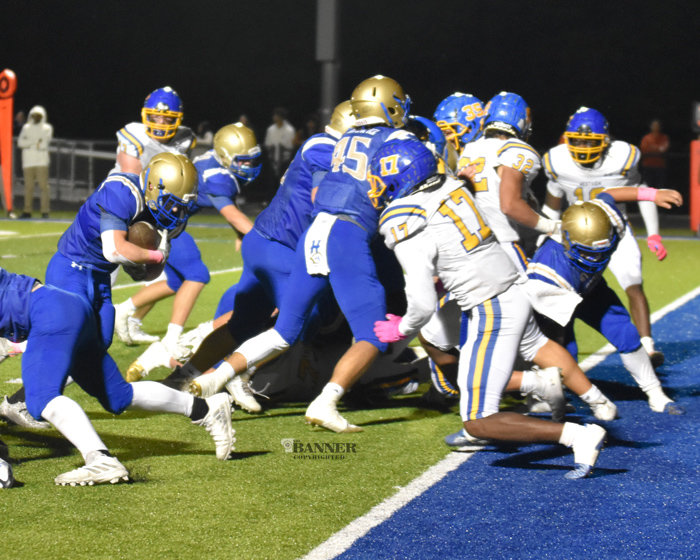 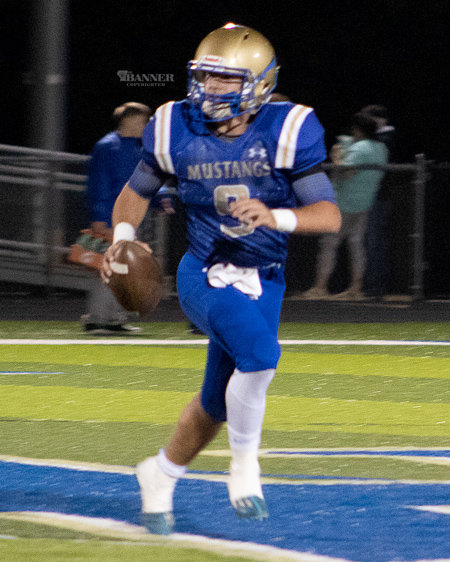 Gray Eubanks looking for a receiver against Westview.
Photo by Jim Potts and Jessa Potts
Previous Next
Posted Tuesday, October 11, 2022 3:14 pm
By Jim Potts
jpotts@mckenziebanner.com
This game was definitely a typical contest between Huntingdon and Westview Friday night, October 7, at Paul Ward Stadium. It was tough, physical, and very close from start to finish and decided the Region 7AA championship. Westview’s Chargers won the game but the Mustangs gave them all they could handle!
The Chargers took the ball first on the kickoff and immediately faced pressure from the Mustang defense going three and out on the possession. Huntingdon started their first offensive attempt at their own 40 and drove to the Westview 41 before having to punt. The punt resulted in a touchback placing the Chargers at their own 20 to start their next possession.
Two plays into the possession, Westview fumbled after a long run with Huntingdon recovering the ball near the Mustang 25. They mounted a drive that went to the Westview 35 where a short punt backed the Chargers to their own 10-yard line. They scored first on the first play from scrimmage on a 90-yard touchdown run with under a minute to play in the first quarter. The PAT was good for a 7-0 Westview lead.
The Mustangs opened the second quarter with possession and drove into Westview territory again before being forced to punt. After another touchback, Westview struck again with an 80-yard touchdown pass with 7:13 left in the second quarter. The PAT was good for a 14-0 Charger lead.
Huntingdon got a decent return on the kickoff and started their next drive from the Mustang 41. They hammered away at Westview’s defense with the Mustang run game mixed with the occasional pass and scored their first touchdown on an 8-yard touchdown run by Ashton Hutcherson. The PAT was good cutting the Charger lead in half 14-7 with 2:20 left in the second quarter.
Westview wasted little time moving back downfield scoring their third touchdown on a 24-yard pass with 18 seconds left in the half with the PAT good for a 21-7 Charger lead. Huntingdon finished off the first half clock with a couple of plays going into halftime trailing by two scores.
The Mustangs got the ball first in the second half and mounted one of their clock-eating drives that took nearly half of the third quarter clock punching it in the end zone on a 1-yard run by Ashton Hutcherson. The PAT was good cutting the Charger lead to 21-14 with 6:45 left in the third quarter.
Westview answered with a quick drive that resulted in another Charger touchdown on a 7-yard touchdown with the PAT no good increasing their lead to 27-14 late in the third quarter.
Huntingdon got good field position to start their next possession which rolled into the fourth quarter. The Mustangs scored with 11:48 left in the fourth quarter on a 9-yard Gray Eubanks touchdown run. The PAT was good cutting the lead to 27-21 with the Chargers still in the lead.
The Mustangs got the ball back after Westview threw incomplete passes on third and fourth down. Huntingdon took over the ball with 7:59 left in the game and chewed up slightly over four minutes on a drive that resulted in a tying touchdown. The score came on an Ashton Hutcherson 1-yard TD but had the extra point blocked leaving the score tied 27-27 with 3:21 remaining to play.
Westview took the ball after the kickoff and used an up-tempo style offense and scored what turned out to be the winning TD on a 15-yard pass with 42 seconds left to play. The PAT was good for a 34-27 lead. Huntingdon got the ball back to midfield but ran out of time losing a hard-fought contest.
Westview secured the Region 7AA title with the win having already defeated Union City. The Chargers will host the first two rounds of the playoffs in Martin. Meanwhile, second place is up for grabs between Huntingdon and Union City who will play each other October 28 at Union City. The winner will finish second and host a first round playoff game at home. The loser will likely finish third and travel to Region 8AA’s second place team on November 4.
The Mustangs are off this week with an open date and will be back in action on October 21 at Trenton before finishing the regular season at Union City.