McKENZIE (November 11) — McKenzie Rebels are 12-0 on the season after their defeat of Moore County on Friday, November 11. The Rebels play Fayetteville at Rebel Stadium on Friday. Both teams are 12-0. Fayetteville defeated Dresden, 42-17, to advance to the quarterfinals. There are eight teams statewide remaining in Class 1A playoffs. 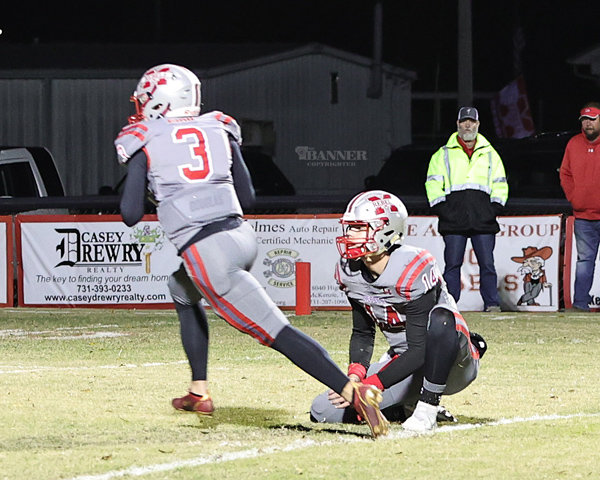 A fake point-after led Zach Aird (#3) to a 2-point conversion. When his progress stalled, his fellow team mates successfully pushed him into the end zone. Tate Surber (#14), who holds for the PAT, watches as Aird moves forward. 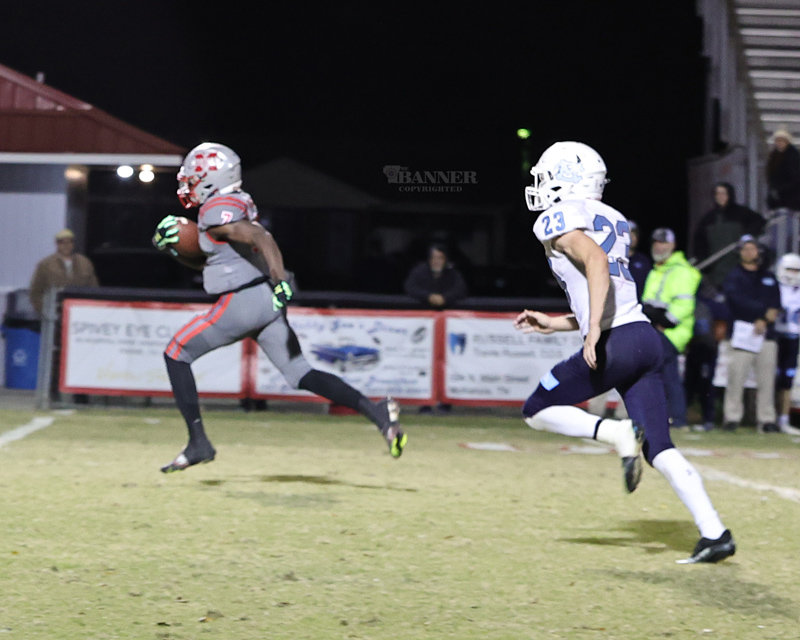 A common sight — Marquez Taylor runs past his defenders for a TD. 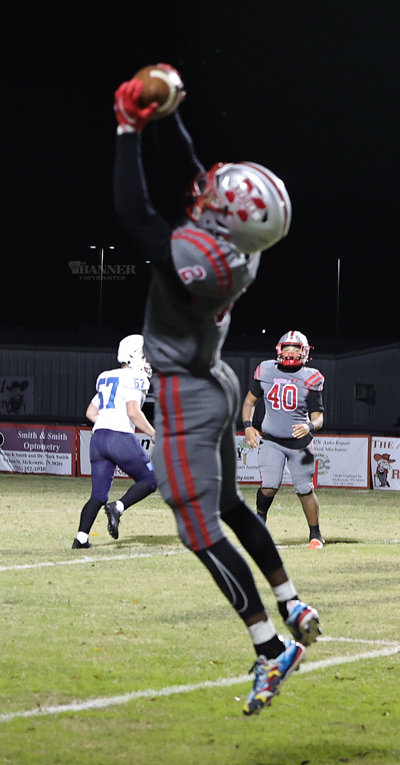 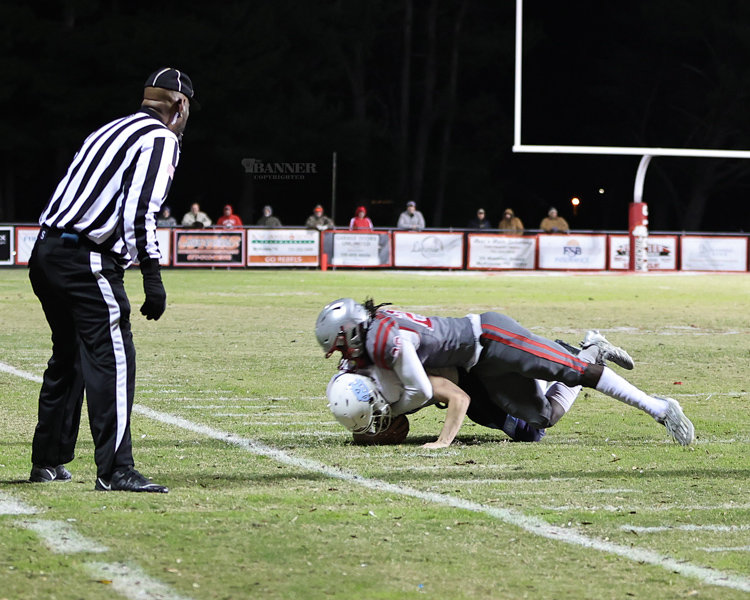 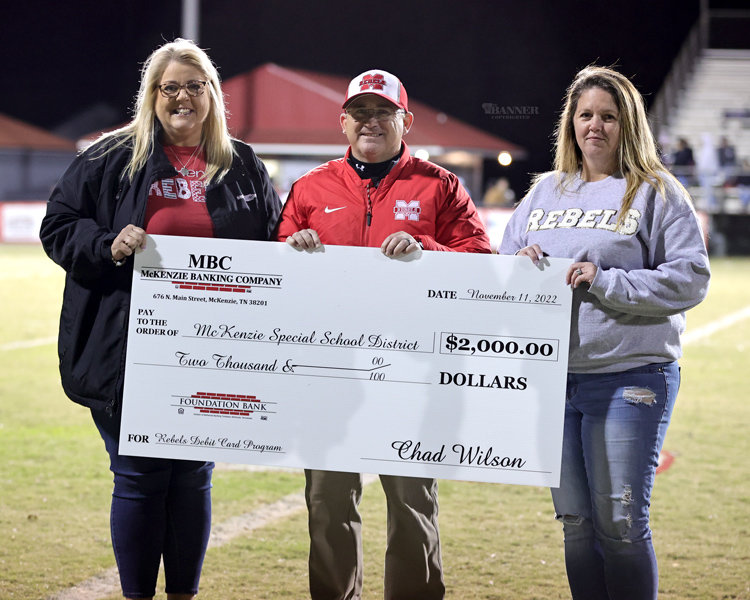 At the half, McKenzie Banking Company representatives Shawna Fowler and Lisa Stewart present a $2,000 check to McKenzie High School Principal Kelly Spivey.
Previous Next
Posted Tuesday, November 15, 2022 2:41 pm
McKENZIE (November 11) — McKenzie Rebels are 12-0 on the season after their defeat of Moore County on Friday, November 11. The Rebels play Fayetteville at Rebel Stadium on Friday. Both teams are 12-0. Fayetteville defeated Dresden, 42-17, to advance to the quarterfinals. There are eight teams statewide remaining in Class 1A playoffs.
Moore County struck first with a 16-yard pass from QB Dawson White to Will Baker with 45 seconds remaining in the first quarter. Bake Bradford added the PAT for the 7-0 lead.
Just twenty seconds later, McKenzie Quarterback Jackson Cassidy scored on a 65-yard run. Zach Aird added the PAT to tie the game at 7 points.
Moore County’s Baker scored on a 7-yard pass from White and Bradford added the PAT at the 7:09 mark in the second quarter. Again, 18 seconds later, McKenzie scored with Marquez Taylor on a 63-yard run to make the score 13-14.
Taylor scored twice more in the second quarter on a 19-yard run, Aird had a two-point conversion, and Taylor followed with a 23-yard pass from Cassidy and Aird added the PAT for a 28-14 lead going into the half.
In the third quarter, Cassidy had a 31-yard run for a TD and Aird a PAT. Marquez Taylor had a 65-yard run for a TD and Aird added the PAT for 42-14 score.
In the fourth quarter, White had a two-yard TD run for Moore County and Bradford added the PAT for a 42-21 score. The last two touchdowns were by Taylor on a 47-yard run and Etijay Tharpe on a 35-yard interception return. Aird added the PATs for both fourth-quarter TDs.
McKenzie ran 27 plays compared to Moore County’s 79. Total yards were 417 for McKenzie and 340 for Moore County. McKenzie had 320 rushing yards and 97 passing.
Cassidy was 7 of 10 on passing for 97 yards and 1 TD. Dalton White (Moore Co) was 14 of 25 on passing for 159 yards and 2 TDs and 2 interceptions.
Taylor had 11 rushes for 219 yards and four TDs. Jackson Cassidy had one rush for 31 yards and a TD.
MHS receiving was Taylor, two for 49 yards; Zay Webber, 2 for 31 yards and Zach Aird 1 for 4 yards.
MHS tackles were Rashad McCreary with 8 and 3 assists; Jackson Cassidy 7 and 1 assist; Drew Chappell 7; Tate Surber 5, 3 assists and 1 sack; Camden Allison 5; M. Taylor 4, Etijay Tharpe 3; Brady Brewer 1, Z. Webber 1 and 1 assist; David Cheney 1 and 1 assist; Daniel Latimer 1 and 1 assist; KaDarius Cunningham 1 and 1 assist; Jose Luna 1; Stafford Roditis 1; Jake Cassidy, 1 assist; Ace Fisher 1 assist; Landon Brown 1 assist.
Z. Aird had six PATs and one kickoff. Stafford Roditis 8 kickoffs for 400 yards and two punts; Jackson Cassidy 1 for 11 yards.