Rebels Are 9-0 After Defeat of Tigers

McKENZIE (October 21) — McKenzie Rebels are 9-0 on the season after its 49-0 defeat of the Hollow Rock-Bruceton Tigers at Rebel Stadium last Friday. It was the Rebels last home game in the regular season and the seniors were honored during pre-game ceremonies.

Rebels Are 9-0 After Defeat of Tigers 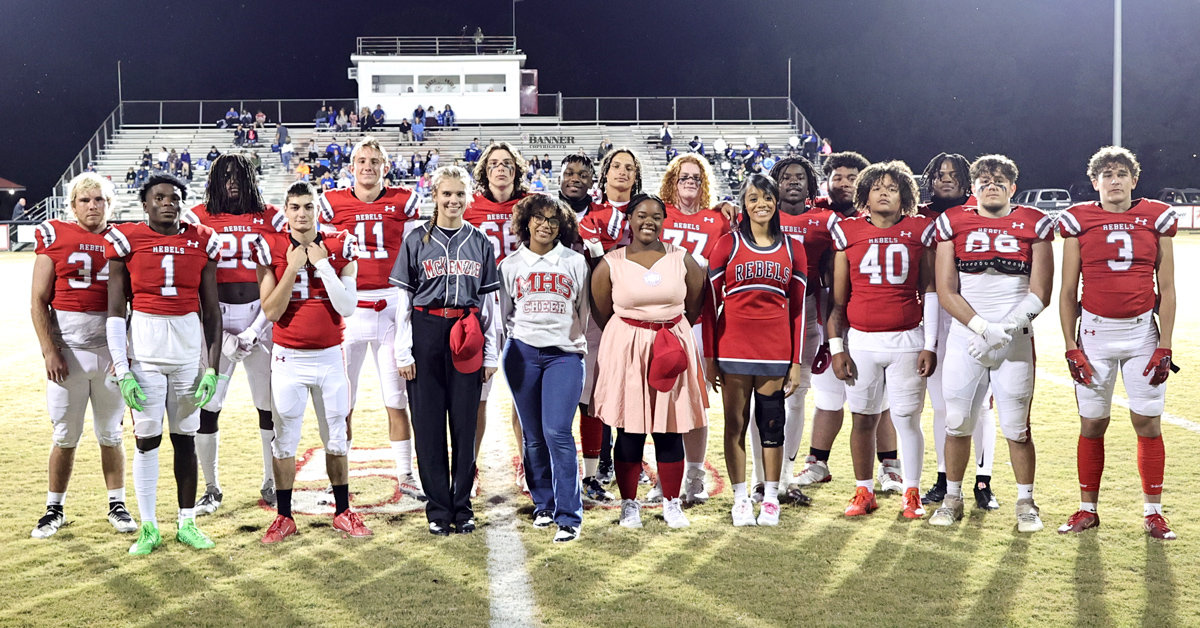 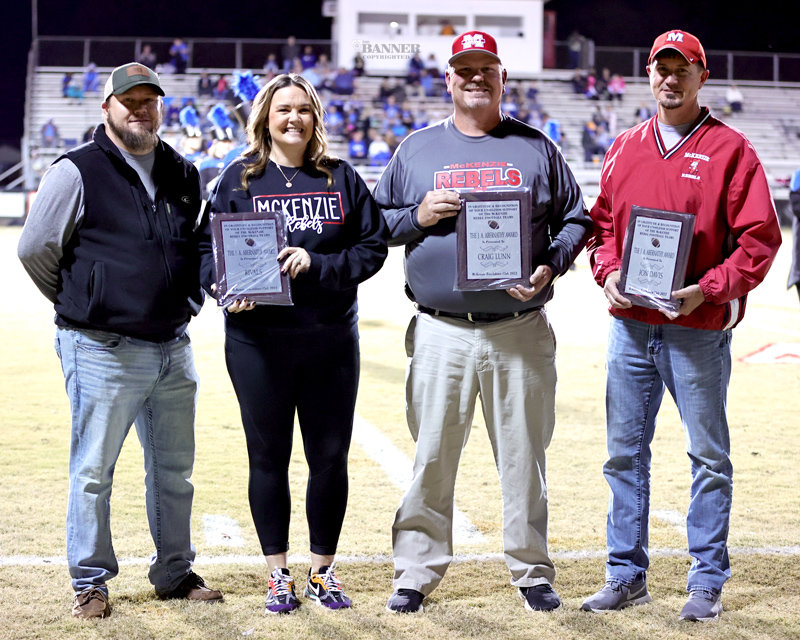 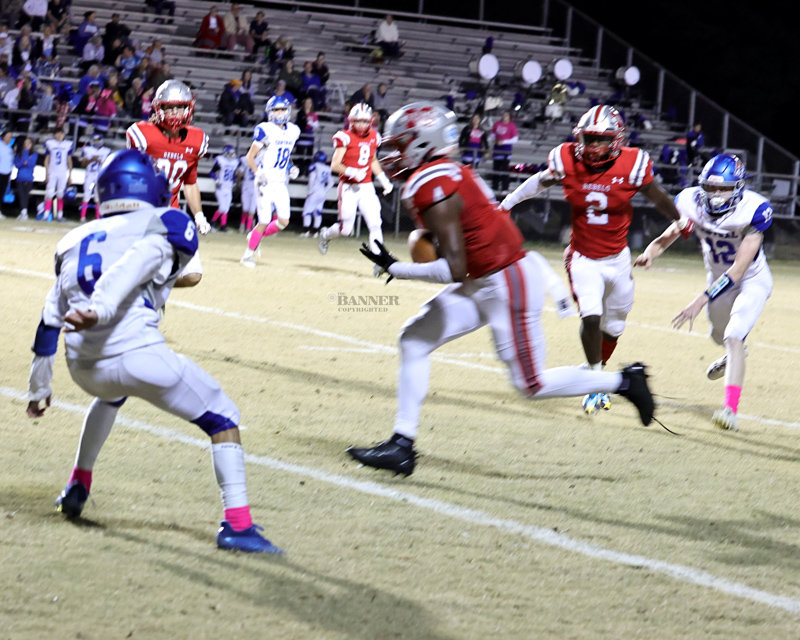 Zay Webber scores a touchdown after intercepting a pass. 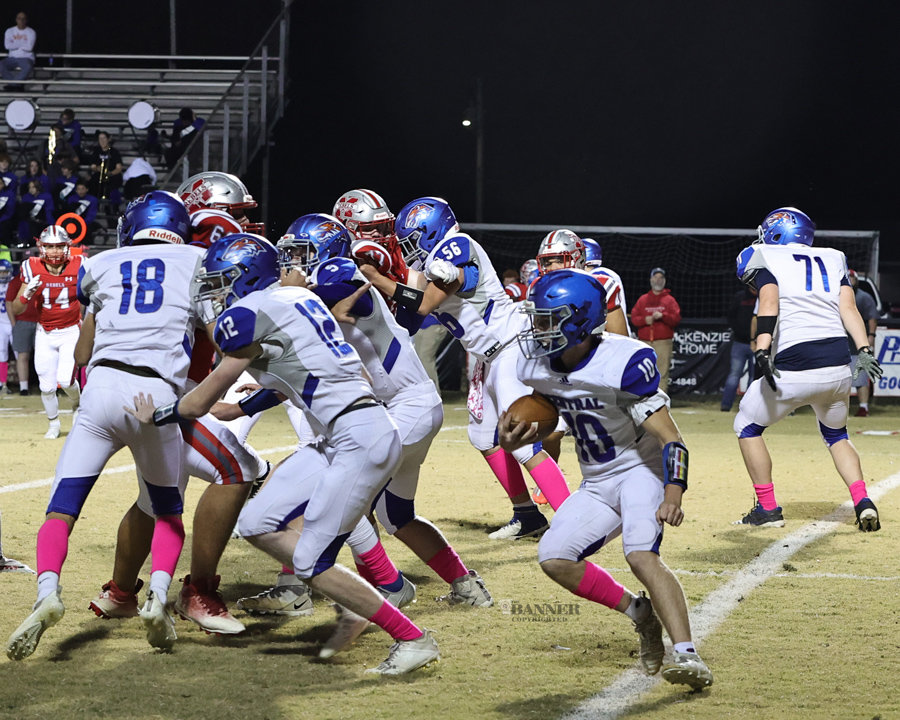 #10 Tiger, Preston Hollingsworth, finds running room as he works his way around the end.
Previous Next
Posted Tuesday, October 25, 2022 1:20 pm
By Joel Washburn
washburn@mckenziebanner.com
McKENZIE (October 21) — McKenzie Rebels are 9-0 on the season after its 49-0 defeat of the Hollow Rock-Bruceton Tigers at Rebel Stadium last Friday. It was the Rebels last home game in the regular season and the seniors were honored during pre-game ceremonies.
At halftime, the annual J.A. Abernathy Award was presented by Touchdown Club President George Cassidy. Luke and Erica Rawls, owners of Rivals Sports Bar and Grill, were honored as the top business to support the Rebels program. Craig Lunn and Jon Davis of the broadcast team of WHDM were honored as the individual supporters. The late J.A. Abernathy was a major supporter of the Rebels. He owned a hardware store in downtown McKenzie. His sons, Jim (class of 1955), played for the University of the South in football, George L (class of 1969), played football at Vanderbilt, his daughter, Judy (class of 1960), played on the Rebelettes basketball team that played in the state tournament in 1960.
In the Friday night contest, McKenzie Rebels scored four touchdowns in the first quarter with Zay Webber on a 16-yard pass from QB Jackson Cassidy, Zach Aird on a 25-yard pass from Cassidy, Webber on a 23-yard pass from Cassidy, and Marquez Taylor on a 76-yard pass from Cassidy. In the second quarter, Cassidy on a QB keeper, trotted into the end zone on a seven-yard rush followed by a 7-yard rushing touchdown by Marquez Taylor. Zay Webber added the final touchdown in the third quarter on a 23-yard interception return.
Senior Zach Aird was perfect on seven point-after touchdown kicks adding seven points.
The Tigers chose to kill playing time by exhausting the play clock prior to each snap. In the second half, the quarters were shortened to eight minutes with a running clock after the Rebels attained the requisite 30-point advantage to secure the running clock.
Cassidy was six for eight on passing for 127 yards and three touchdowns. Tate Surber was one for one on passing for 15 yards.
Taylor had 6 rushes for 165 yards and two touchdowns. His longest rush was 76 yards. Etijay Tharpe had 3 carries for 36 yards, Brady Brewer had 5 carries for 14 yards, Jake Cassidy had 1 carry for 7 yards, and Colt Norden had 2 carries for 4 yards.
McKenzie High School tackles included Aird with 2, Rashad McCreary with 2, Jackson Cassidy with 1, Tate Surber with 1 and two assists, Dalton Hatley with 1 and 1 assist, Camden Allison with 1, Mason Batten with 1, David Cheney with one assist, Daniel Latimer with 1, Landon Brown with 1 assist.
Stafford Roditis had 5 kickoffs for 268 yards with the longest single kick at 60 yards and one touchback. Zach Aird had 3 kickoffs for 164 yards with the longest at 58 yards.
The Rebels have dominated their regular season opponents, thanks, in part, to a senior-heavy squad. In some contests, the Rebels’ opponents were kept to negative rushing yards. That was not the case for the Tigers, who attained 52 rushing yards and 53 receiving yards.
The Tigers had 52 yards rushing with Braxton Howard leading with 42 yards, and Brady Roberts with 4.
In receiving yards Roberts had 9 yards.
Next Friday, McKenzie travels to McEwen prior to the first round of playoffs at Rebel Stadium.
The Tigers travel to Dresden next Friday.