The McKenzie Rebels played host to Dresden and traveled to South Gibson to open the month of May and close out the regular season. 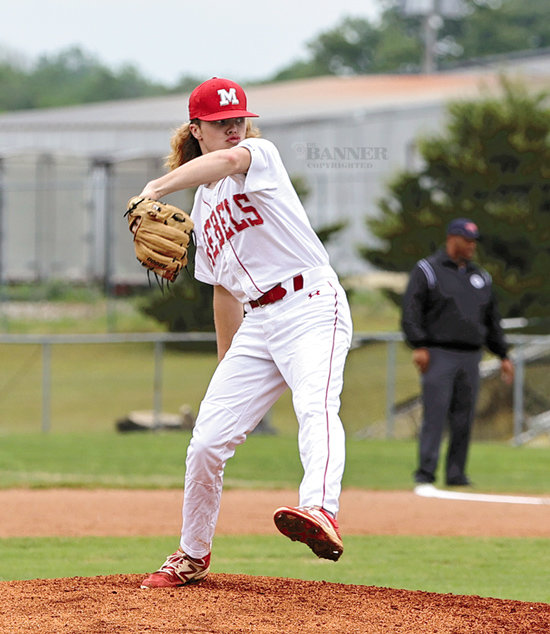 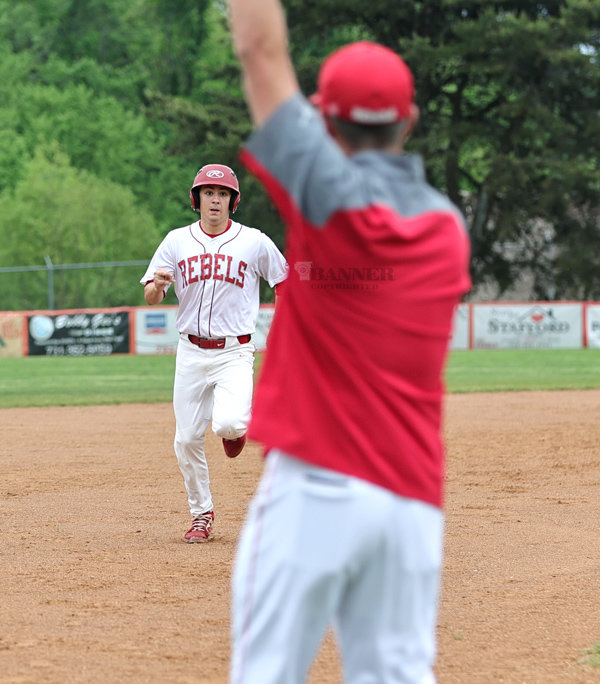 Coach Wall Signals a runner to round 3rd base.
Photo by Joel Washburn/The Banner
Previous Next
Posted Tuesday, May 10, 2022 9:44 am
By Jim Potts
jpotts@mckenziebanner.com

The McKenzie Rebels played host to Dresden and traveled to South Gibson to open the month of May and close out the regular season.

Dresden
The contest against the Lions had a little of everything. A lopsided score, a close score, a tie score, a lengthy rain delay, and finally a winning hit with two outs in the bottom of the eighth inning.

Dresden struck first in the top of the first inning with a pair of runs. The Rebels answered in the bottom of the inning when a ground rule double tied the game 2-2. Another run came in shortly after to give McKenzie a 3-2 lead after one inning.

In the second inning after holding Dresden to no score, McKenzie scored two more runs with one of them being a long solo homer by Tate Surber giving the Rebels a 5-2 lead. Another homer left the park for McKenzie in the third inning when Jackson Cassidy cleared the fences to make it a 6-2 Rebel lead.

Jake McDaniel blasted a 2-run homer in the bottom of the fourth giving the Rebels an 8-2 lead. Dresden added a single run in the top of the fifth inning for an 8-3 score.

McKenzie went into a drought with no runs in the fifth, sixth, and seventh innings. Meanwhile Dresden scored three runs in the top of the sixth inning to cut the Rebel lead to 8-6. Heading into the seventh inning, some lightning flashed causing an initial 30-min delay. Several more lightning sightings extended the delay until the game got back under way around 7:40 with the Lions at bat.

Dresden had runners on first and third with no outs and scored two runs to tie the game 8-8. McKenzie failed to score in the bottom of the seventh and held the Lions to no score in the top of the eighth inning. In the bottom of the eighth, Zayden McCaslin got on base with one out. Two batters later Nolan Renfro hit a double with two outs that drove McCaslin in for a 9-8 winning score.

Jackson Cassidy went six innings giving up nine hits and eight runs, walked two and struck out two. Lane Anderson came in the top of the seventh prior to the rain delay giving up one hit and two runs while walking two batters. Ty Anderson finished the game striking out three batters.

McKenzie had five hits in the game while South Gibson had seven hits. Jake McDaniels led with a pair of base hits and scored a run. Zayden McCaslin, Jackson Cassidy, and Braden Birmingham added solo hits for the Rebels.